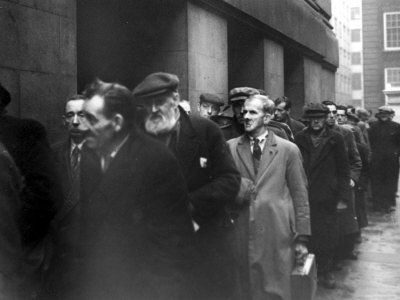 “Why? What makes you special,” the tall woman mutters, reaches down and tugs Doe’s wig straight, who gratefully looks up and says “I have a heart condition. I can’t stand for this long.”

“Well look around. We’re all John and Jane Does here,” she yawns. A man wrapped in bandages falls and begins convulsing. The tall woman swings her crutches over him as the line of sickly people shuffles forward a few feet. Doe looks around. Haggard faces surround her. They have dimmed eyes and pale skin as if life had drained into their feet while waiting on the endless Line. Everyone is trying to get inside the hospital. She looked up to her friend.  “Every since the government took over health care,” the tall woman shrugged. “Waiting is what we do.”

“What does it look like from up there,” Doe asked. The tall woman lifts her chin, studies the Line and said, “It turns goes on and on.” She squints. “Some cops are coming. They’re shoving people back who are spilling out and oh, wait, they just tossed a body out for collection.”

“Honey you know the rules. No Jesus. No Muhammad. No Moses,” she nudges Doe. “Don’t worry, I have a crucifix on me. Our little secret.”

“But I do have one but they wouldn’t even read it at the station,” Doe’s cheeks are scarlet. “Damn bureaucrats stuck me on this 2nd Tier Citizenship line. I paid good money for that letter and…” She stops when the silence thickens around her. She looks and sees eyes, eager greedy eyes staring wide at her. “You have a letter,” a man says and grabs her lapel. “Where is it?” Another hand snatches at her. She ducks and sees the tall woman holding her wig. “What are you doing,” Doe screams but hands pluck at her, tearing sleeves. She swats them away and reels backward until a voice booms through a megaphone.

“Citizens, attention! If any of you has a letter of presidential recognition from the campaign finance committee,” the cop yells. “Please step out of the Line!”

She lunges out as hands rip her coat, spinning she falls on the street and sees the political chant someone carved in the sidewalk cement when it was wet: Yes We Can! ”Citizen!” the cop steps over her and she is pulled up. “Citizen do you have…”

“Yes, yes I have the letter,” she sputters. They walk her to the Health Corps car and she touches her scalp and looks back. Her friend, the tall woman and the others whoop and wave her wig and make knife like slicing motions across their neck. “Savages,” one of the cops murmur. They drive and she looks at the Line. People on crutches, in bandages, leaning on each other and of course the bodies stacked on the side waiting for the incinerator truck.

They drive for hours and the Line seems endless and she sees again the same people, the tall woman on crutches, the man coughing green fluid in his hand. “Officer? Officer?” One turns to face her. “Why am I seeing the same…” She goes quiet then says “It isn’t even a Line is it? The people, they’re moving in a circle and don’t even know it. They aren’t meant to get anywhere.”