Rupert Murdoch’s attitude to the pressing issues of our time is generally indifference or utter denial. This is precisely why the political satirist the Yes Men chose the New York Post for their latest ingenious stunt.  And environmentalists praise the effort.

Susan Alzner, UN Climate Summit Coordinator for the environmental advocacy group Global Campaign for Climate Action, told The Indypendent “we have the benefit of more than 30 years of scientific analysis on climate change and everything in the paper is based on readily available scientific conclusions.  We literally don’t have time to debate the science anymore, and most world leaders acknowledge this.”

As New York Times science writer Andrew Revkin blogged yesterday, a minor recent plateau in global temperatures, “has been seized upon by skeptics as evidence that the threat of global warming is overblown.”

Revkin cites environmental experts who told him that “trying to communicate such scientific nuances to the public—and to policy makers—can be frustrating,” and is often met with “confusion and even anger.”

The paper’s designer Daniel Dunham told The Indypendent the Yes Men chose the Post for their climate change edition of the paper because “the people who read the New York Post regularly are the audience that’s hard to talk about the dangers involved for the planet in climate change,” because the topic climate change “is not something the Post covers with any sort of regularity “.

The Yes Men’s Post “takes a massive amount of information that is all too often overly intellectualized or overly politicized, and makes it understandable to the general public,” Alzner added.

The spoof version of the New York Post that the Yes Men distributed earlier this week, “defines the problems and presents solutions in a straightforward and often entertaining way,” Alzner said.

Unsurprisingly, Alzner adds, the media has missed the point: thus far, it has ignored the paper’s scientifically accurate content.

Kelly Anderson was put in charge of designing the Post‘s fake ads, which again (at first glance) are indistinguishable from the real thing. The Indypendent asked her to discuss her favorite three which included ads for water, cars and travel. 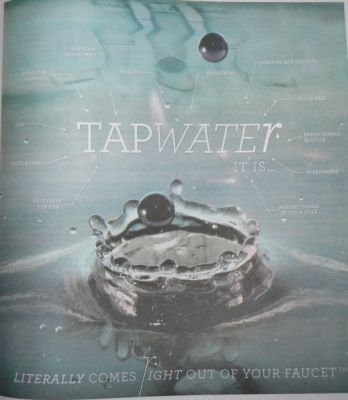 “The first one we have a is a very beautiful, luscious, crisp, cold tap water ad. And so we’re reminding people that it is not only necessary for life, but it’s also free and it literally comes right out of your faucet… and it’s not yet owned by Coca-Cola, which is also a feature.” 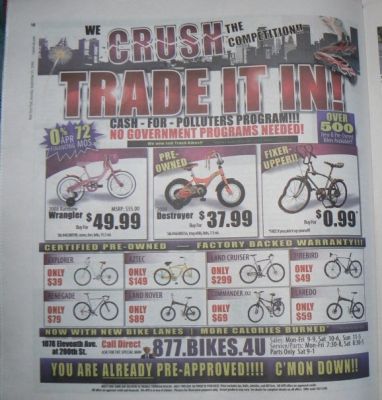 “We mimicked your typical super-aggressive car ad claiming to crush the competition with all of these very masculine graphics. But what’s actually for sale are used bikes. So we have pink bikes with streamers, we have orange bikes that have tiger stripes on them, and we have various friendly used bikes that are named after hyper-aggressive car names like Destroyer and Commander, Land Rover, Renegade. So it’s kind of a fun ad.” 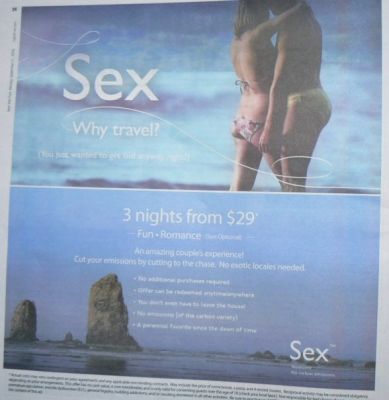 “In the New York Post we noticed that there’s a lot of destination ads, encouraging people to come to Aruba, or the Bahamas. And so we devised an ad that would be better for the environment. It’s an ad for sex. We’re saying, why travel? You just wanted to go to this exotic locale to get laid anyway. All these advertisements for these exotic locations are very sex heavy. It’s basically what they’re selling anyway. So instead of selling something that involved a lot of money and a lot of emissions, we say why not just stay at home and order a pizza and hang out with your partner?”

Ariel Tirosh contributed to this story.