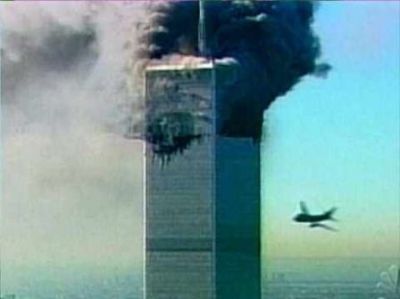 from the film Hiroshima Mon Amour

There is an earthquake inside of me. It is eight years old.  If I hold still long enough, my hands will tremor, my throat thicken, my heart heave. But I don’t. I move through the days and nights gaining with each more distance from the sight of jets ramming the Twin Towers, their smoky collapse and the funeral ash floating down. It is a day covered by many other days, a memory under many memories. After eight years, I’ve buried September 11th in my body.

But inside sleep, beneath thought, the tremors continue. Two years after, I sat on my friend’s Brigit’s couch in Boston. She asked me, wide eyed, about the people running across the bridge, white as mimes. Jutting my finger like a saber, I cut into U.S. foreign policy, I shouted my anti-war rhetoric but a sudden heat melted my words into a wet cry. I opened my mouth and couldn’t shape sound. My eyes stung and I felt what I had refused to feel for two years.

When two beams of light first shined from Ground Zero, I went to huddle near them, trying to see what life meant in the after-glow of death. Stomping to keep warm in the cool, I watched 9/11 conspiracy theorists shout for a new investigation. In their wild cries was the anger I refused to feel. In their accusations of a plot was a faith in order that I lost to the chaos of life. They were professional mourners peddling stylized sorrow to the grieving.

Last May I met a woman who told me about being at NYU dorms when the Towers fell. She ran out in blind terror, coated with dust. We both stood there, swaying from the cloud blowing through an opened memory.

What else do we bury? What else do we carry with us in silence? We have only a short time to answer before our body takes our memory with it. Generations born later will know 9/11 from news footage researched for school assignments, but the ringing terror of it will end with some last person.

At some unknown moment, when some unknown man or woman closes their eyes for the last, then the tremors will stop, evaporated, as all history is, with the body. And a new terror will take its place. Another city will shake, another day will turn black. And who will remember that terror and when will it be forgotten? Is this why history moves in an endless cycle because at its hub is a body that speaks but is never heard?