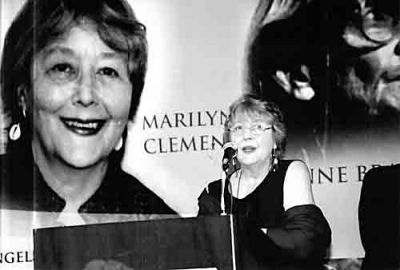 Tireless, brilliant, determined, creative — this is how many people describe Marilyn Clement, who died Aug. 3. Though accurate, these terms do not do her justice.

Clement was a hero to many. She had a lifelong commitment to radical politics that stemmed from a deep sense of justice. She always radiated enthusiasm and had a fearlessness, not of the foolhardy, but of someone who did not quail before state power.

Born in Tulia, Texas, in 1935, Clement recalled in 2003, “My parents were sharecroppers and people of faith. … The United Methodist Church challenged me as a youth and trained me to work for the common good.” Working for the common good, she said, is a “wonderful way to spend a lifetime.”

Her life reads like a history of the left. Her organizing began with the Southern Christian Leadership Conference (SCLC) in the 1960s, where she worked with civil rights leaders including Dr. Martin Luther King, Jr.

She went on to join the Interreligious Foundation for Community Organization and serve as the executive director of the Center for Constitutional Rights (CCR) from 1976 to 1989. While at CCR, she helped found the Anti-Klan Network, which worked to “counter Klan and Nazi terrorism.”

During the 1990s, she worked with the Women’s International League for Peace and Freedom and the African National Congress and began her healthcare organizing. Earlier this decade, she founded Healthcare-NOW, the leading national advocate for single-payer healthcare.

Arguing that healthcare should be a human right, she framed it as a new civil rights movement.

She probably would not be surprised that the Democrats may actually make the healthcare system worse. The Obama administration wants to steal from publicly funded healthcare and divert the revenues to private insurers, HMOs and pharmaceutical companies.

Despite how mightily Clement fought, she was unable to get the single-payer movement to use the tactics of the civil rights movement, to nonviolently disrupt the system so that enacting universal single-payer healthcare was the less painful choice for the government.

But Clement would not have wallowed in despair. She was certain that we would eventually win.

Even as her life was winding down, and as her congregation celebrated her life in June, she wasn’t interested in the spotlight. Her concern was always about organizing for change and nurturing new generations of activists.

Quoting Dr. King, Clement told her congregation, “The arc of history is long, but it bends toward justice.”

A memorial service for Marilyn Clement will be held at Judson Memorial Church Oct. 17 at 1 pm.