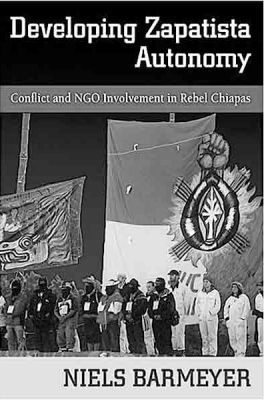 The influence of the Zapatistas has gone far beyond the small state of Chiapas or even Mexico. Their message and political ideas have echoed around the globe, so much so that Oaxaca-based writer Gustavo Esteva writes that, “Zapatismo is perhaps one of the most important political initiatives in the world today.” This is the starting point taken by German anthropologist Niels Barmeyer, who, “like most other internationals,” went to Chiapas in the 1990s for a Zapatista fix, “drawn by notions of egalitarianism, communal living and independence from globalized economies.”

Barmeyer relates how he was originally captivated by the dynamic Zapatista movement through his involvement in the left/ autonomous scene in Berlin, which exposed him to ideas about participatory democracy and horizontal forms of social organization. Barmeyer put these theories into practice through working in solidarity with the Zapatistas in Chiapas, first as a human rights activist in peace camps and later as a volunteer installing water systems in indigenous rebel villages.

But as he methodically dissects his extensive research and experience in Zapatista communities since the uprising of 1994, Barmeyer’s gaze moves from that of a bright-eyed solidarity activist to that of a dispassionate critical anthropological student, thus ensuring a rigid, unsparing and often scathing appraisal of his subjects.

Barmeyer’s experience is not simply the familiar narrative of a white European going to a foreign land in search of the exotic other and finding only disillusionment and disenchantment. His is a careful study of a revolutionary initiative and its repercussions, specifically the problem of reconciling the language and posture of the actors (local, national and international) and the actual situation. So, for example, within the Chiapas solidarity and nongovernmental organization (NGO) circles Barmeyer moves in, he finds that, “in order not to obstruct the efficiency of fundraising rallies and volunteer recruitment… critical overtones are often omitted and the proliferation of idealized images is perpetuated.”

It is this proliferation of idealized images that Barmeyer deconstructs in this work. These idealized images are, he posits, forged in the writings of Zapatista spokesperson Subcommander Marcos and reproduced by solidarity groups and NGOs working in the region. The result is “rosy portrayals” that are “stunningly uncritical” in their analysis, more reflective of what the people outside want to hear than of the reality on the ground.

Taking a closer look at the much-feted workings of Zapatista governance — generally understood as an extension of a deeply rooted egalitarian indigenous culture — Barmeyer describes how, in practice, decision-making structures are often dominated by men, older community members, and those who can dispense patronage. “Autonomous administrative structures and the way today’s rebel municipalities are run have little to do with Mayan heritage but are actually a hodgepodge of practices ranging from the Catholic cult of village saints imposed by the Spanish crown to the ejidal administration structures laid down in Mexico’s Agrarian Law and organizational elements introduced by cataquistas (lay preachers) and Maoist students in the 1970s.”

Academic texts are often turgid and difficult to decipher. Barmeyer’s work (conducted in the context of a Ph.D course) is saved by a lively, informative and often witty tone. Caught between activist and academic camps, he is mischievous in his descriptions, as his friends become “informants” (informers, some would say), and his home in San Cristobal, where he invites Zapatistas to stay, his “center of research.” Barmeyer befriends one local Zapatista — Cipriano, a self-described wild rover — and he and his extended family become the ongoing object of Barmeyer’s research. Therein lies the dubious academic practice of befriending people on the ground to study them.

Early in the book, Barmeyer describes how one local NGO operative refused to allow him to participate in the group’s solidarity project, because he thought Barmeyer’s anthropological research would injure the communities involved and provide fodder for the Zapatistas’ enemies.

However, it can also be argued that an extensive and thorough investigation into the failures of the Zapatista movement such as Barmeyer’s work can strengthen and consolidate the movement. Despite its devastating critique, Developing Zapatista Autonomy aims not so much to undermine the validity of the rebel project, but to dispense with idealized images. Instead of harboring untenable illusions or offering unconditional solidarity with revolutionary groups, Barmeyer’s work allows Zapatista supporters to reflect on the development of the Zapatista project for autonomy so far. As the tide turns for the Zapatistas and they fall out of local, national and international favor, is the movement strong enough to respond creatively to growing criticism, both within Mexico and internationally?