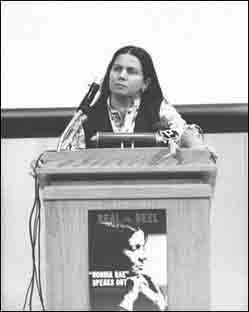 The North Carolina union organizer who was the inspiration for the movie Norma Rae died Sept. 11 of brain cancer after a battle with her insurance company, which delayed her treatment. She was 68.

Crystal Lee Sutton, formerly Crystal Lee Jordan, was fired from her job folding towels at the J.P. Stevens textile plant in her hometown of Roanoke Rapids, N.C., for trying to organize a union in the early 1970s. Her last action at the plant — writing the word “UNION” on a piece of cardboard and standing on her work table, leading her co-workers to turn off their machines in solidarity — was memorialized by actress Sally Field in the 1979 film.

Several years ago, Sutton was diagnosed with meningioma, a type of cancer of the nervous system. While such cancers are typically slow-growing, Sutton’s was not — and she went two months without potentially life-saving medication because her insurance balked at covering it. Sutton told the Burlington Times-News (N.C.) last year that the insurer’s behavior was an example of abuse of the working poor:

“How in the world can it take so long to find out [whether they would cover the medicine or not] when it could be a matter of life or death?” Sutton said. “It is almost like, in a way, committing murder.”

The full version of this article originally appeared at southernstudies.org.