Our seven days of dancing, ass-slapping, body-painting, yoga-bending, Tantric touching, Kabbalah meditating, nude New Age revelry in the fire blasted Nevada desert was coming to an end. It was the last day of Burning Man. On Sunday September 6th I walked across the city sighing at its dismantling. Domes that pulsed with light and music lay flat, half rolled up. Anxiety sank like a weight in my belly. In hours I will leave this ephemeral utopia for the world outside with little evidence that this ever existed. What could be kept of this except the desire to come back? 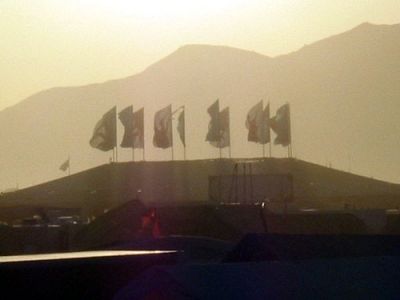 I walked to Center Camp, a large circular tent with flags fluttering in the grainy dust storm. Inside sand-coated burners lounged on pillows, faces alert, listening. I turn and saw Reverend Billy, a performance activist from New York who is campaigning for mayor. He paced back and forth, blond hair bobbing as he ducked and weaved and shouted his sermon. His white suit blazed in the sunlight, a black microphone coiled around his arm as he exhorted the audience.

I watched them bask in his fervor, quiet but curious. “Children…” he rolled his voice into a preacher’s rhythm. “We know the wonders of Burning Man. Here we see things seen nowhere else. Here the sun and moon set at the same time.” Voices whoop as the Reverend leans forward, “I know you want to take this fire into the world of big box stores. But children, without social change, we support, every day we support the statement of the American military culture. And that statement is, ‘If you threaten me I will kill you.’ And we support this statement with our taxes. We do most of our shopping, as Americans, not at Wal-Mart but at the Pentagon!” 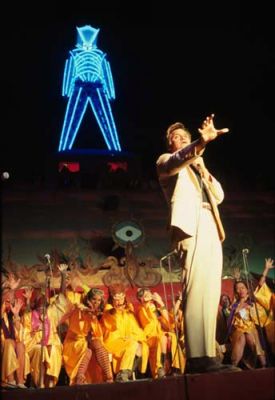 People nod as if his words were weights tipping scales in their minds. His hands jumped around the air, “We need to be radical Americans like we’ve been before in the Labor Movement, in the Civil Rights Movement, in the Women’s Movement.” He dabbed his face with a sweat rag. “Children the earth is sending us messages. We see it in the typhoons that rip our coastal cities. We see it in the floods that sweep away towns and the earth is saying, we must be like the typhoons, we must be like the flood.”

Eyes lit up. His mythic words opened a door into a world of primal forces that could wash away our numbness. “All the life that is not human is calling us to join it in a duet of activism,” he crooned. “Children…” his voice darkened as he stopped and held out his hand as if gently parting a veil. “Some of us are going to have to die. In every great movement our freedom was earned by those died and there is life in death…”

A strange light glowed on their faces. He made visible a terrible truth that promised us a reality more powerful than our lives. I’ve heard preachers my whole life and many have said the same thing but I read about Reverend Billy and know that his campaign for mayor has taken a toll on his body. Recently his heart skipped and jumped. He missed campaign events until medicine thinned his blood, now he’s back on-stage, inviting the silent anxiety of people to shake him again until prophetic words cascade out and the audience can see the dream they buried inside themselves.

“Gradualism has taken over the world of social activism, there isn’t a 60’s movement that hasn’t become a Starbucks flavor. The earth is saying join in, join in your survival by participating in the survival of the earth. Change-a-lujah!”

“Amen,” someone shouts. The brunette woman sitting next to me turns to her friend, “That’s exactly what I needed to hear before going back out to the world.” Reverend Billy ambles off stage into the pews, reaching for hands, pulling people up, embracing them and administering to their need for faith. The circle of fans tightened around him and I waited at the edge, looking in, wanting to ask questions. I ask his handlers for a moment and they agree but cautiously, he’s wrung out but squeezing more. Also I write for the Indypendent and it just published an article asking if his surrealist candidacy has hit the hard wall of real politick.

Reverend Billy glides from admirer to admirer. They slowly peeled away to five then two then he felt the pull of my stare, sat down and I told him who I write for, he nodded and I asked him what instrument he played. “You seem to have a musical bent.” He grins and says the cello and mimes playing it on his raised forearm.

“Why did you choose the televangelist persona?”

“The Right had been looting our icons for years and distorting them. So I took one of theirs, the 80’s TV evangelist, a figure who was punishing and victimizing people through religion and turned it around, made it a parody.”

“When did it stop being a parody” I hold out my hands as if balancing a wobbly weight. “You aren’t just entertaining but strongly attacking capitalism.” The question hangs in the air. 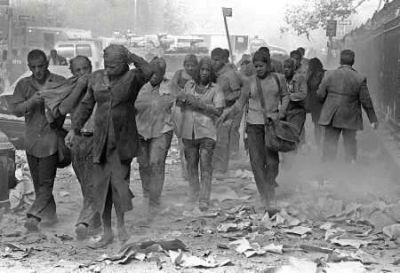 I search his face but he’s looking inside himself, maybe at memories of smoke wafting over the New York skyline or the chalk-paste smell that settled in the hair or the terror spilling out of open mouths. I have the same memories.

He shifts his weight. “The parody was cleansed. We wanted fellowship, even if many of us had walked away from religion. We wanted to be in a room holding hands. At that time, I was reading in the Gnostic tradition and developed a faith that was less parody.”

I paused before asking the next question. “Reverend…you said the earth is sending us messages through the typhoons and floods to be – powerful and unstoppable – but if we extend that analogy doesn’t nature kill and is that saying that we, like nature, should destroy anyone who stands in our way?” His forehead creased. Maybe he saw the direction each answer would take him, maybe he calculated how it would play off his image.

“Non-violence can be middle-class affectation but I respectfully disagree with anyone planning violence.” He leans on his hands that are clamped on his knees, “I’m in the Gandhi, King, Tolstoy tradition.” He raised his finger, “But the most effective movements have been when those who struggle non-violently and those willing to use violence work together in a duet.”

I saw his handlers waiting for him and closed my notebook. Every interview has a natural arc when questions and answers climax to a point of illumination. He rose, offered me his hand, we shook and I wandered through Center Camp remembering his words, wondering how they fit into the life outside this vanishing city. Later as I walked across the dusty streets to my camp I saw a man waving at me. It was the Reverend. I trotted over, “Man, I almost didn’t see you.” He was in casual jacket and jeans. We stared at the desert for a moment. I turned to him. “How do you survive as a human lightning rod for people’s ecstasy and anxiety?” He thought for a moment, “Walks in the woods. I have to be healthy on purpose.”
“Your heart?”

“I’ve had heart troubles. We’ve missed a few events but we keep going.” Between his words, I notice his shyness. It’s as if his public persona is so important to so many people that he now lives within it, warily watching it grow, knowing each new believer adds more weight to a performance his body is being worn down by.

His wife Savitri D came by and Reverend introduced us. Another woman, younger and giddy bounded up to us and showed off her costume. He took off his jacket and opened it for her. She refused at first but the sun had set and the desert chills quickly. Already cool winds blew from the dark side of the sky. She put it on, like a daughter who has been given her father’s oversized coat. She looks happy, safe, loved. It’s a small gesture but I trust those more than the large theatrical ones which are inevitably meant for an audience. Small gestures escape the need to be seen and this one shows me that Reverend Billy is a man who gives.

We said goodbye and promised to e-mail when we returned to New York. I walked through dusty streets to my rental car and rolled up my tent, packed bags, separated trash into recyclables. In an hour it was black night. Throngs of people walked to the Temple, flashlights swaying in hand, the beams of light crisscrossing, making circles of light that slipped over the dark desert floor.

Every year at Burning Man a Temple is built and on its wooden timbers people write goodbyes to loved ones who died that year. Sometimes it’s a memory, sometimes it’s a belated forgiveness, sometimes it’s angry grief at being left alone but all the messages, whether printed and taped or scrawled in black magic marker are how we let go of those taken from us. It is a Temple soaked in grief. I went there this year and said goodbye to an old version of myself and to the many mistakes he made. 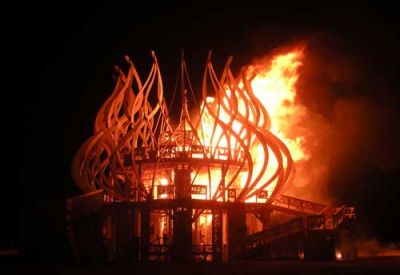 Thousands of us gathered around it and watched the fire sprout and curl around the Temple, engulfing it. We were so silent I heard wood crackle. People wept openly as flames incinerated our goodbyes, our attachments. When the last of the Temple crashed in a spray of orange sparks we rose and walked toward it. Some sang, some chanted, some drummed. We were shadows dancing around a primal light and as I circled the inferno I saw Reverend Billy, closer to it than anyone, smiling serenely as if he saw the beauty of the fire and was at peace with feeding his life to it. Over the shoulders of the people, I touched him briefly, this holy man with the skipping heart who reaches between its faltering beats for a truth we can believe in.