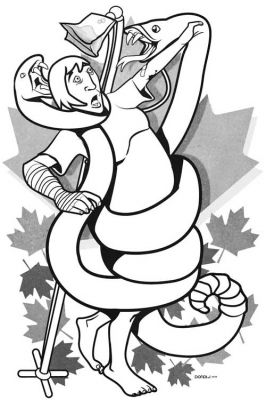 While the debate to reform the U.S. healthcare system often emphasizes differences with Canada, both nations are deeply divided by wealth and income, and their medical systems reflect those divisions.

In the United States, medical rationing is overt, based on the ability to pay. In Canada, rationing is more covert. Medical care is a legal right, but the medical system is too poorly funded to provide comprehensive services to all, so some people are excluded altogether, and access is limited for everyone else.

The Canadian experience proves that government-funded medical systems do not guarantee timely access to needed services. Ironically, while many Americans long for a Canadian-style medical system, that system is disintegrating under the pressure of market forces.

– be a Canadian citizen or a documented immigrant;
– be a permanent resident of Ontario;
– be physically present in the province for 153 days in any 12-month period.

Visitors, transients, undocumented immigrants and refugees without status are not covered.

As a final obstacle, a three-month waiting period is imposed before coverage begins. The Ontario government website “strongly encourages new and returning residents to purchase private health insurance in case you become ill during the OHIP waiting period.”

In Canada, as in the United States, capitalists exert constant pressure to reduce social services. Bureaucrats measure “cost-efficiency” and achieve “cost-containment” by reducing the number of services provided, forcing health workers to do more for less and outsourcing to the private sector.

To keep costs down, medical school enrollment has been restricted to the point that Canada needs 26,000 more doctors just to attain the same physician-to-population ratio as in other developed countries.

Underfunding forces patients to wait for assessment and treatment, and half of Canadians say waiting times are longer than they consider reasonable.

To discredit all government-funded systems, advocates of privatized healthcare emphasize how long Canadians wait even though millions of uninsured Americans essentially wait forever. In contrast, defenders of Canada’s Medicare minimize the problem of wait times, making it harder to fight for more funding.

Furthermore, the longer the line, the more inequality grows, and the more pressure there is to develop private-sector alternatives.

Government-funded medical systems offer two important advantages: the cost of medical care is socially shared, so that individuals are not crippled by medical expenses, and medical benefits are removed from the employers’ control, so that workers can change jobs without fear of losing access to care.

THE ORIGINS OF CANADIAN MEDICARE

Until the 1960s, both the U.S. and Canadian medical systems were dominated by the private sector. Charitable organizations provided minimal care for the poor. Regular medical care was reserved for those who could pay and for those whose employers would pay for them.

Canadian physicians and insurance companies vigorously opposed any reforms that smacked of “state medicine” or “socialism.” Neither business nor government supported access to medical care as a human right.

During the 1960s, popular pressure grew for universal healthcare. In 1962, the Canadian Labour Congress made its preference clear: “We favor a system of public healthcare that will be universal in application and comprehensive in coverage. We favor a system that will present no economic barrier between the service and those who need it.”

Despite the grassroots demand for socialized medicine, where the state is both payer and provider, Canada’s Medical Care Insurance Act of 1966 established socialized insurance, a publicly financed, private enterprise system “free of government control or domination.” It took five more years to implement in all provinces.

In the province of Quebec, union demands peaked in the 1972 general strike. In response, Quebec incorporated medical services into a broad social benefits system, paid for and provided by the provincial government. The Quebec working class is rarely credited for winning the most comprehensive socialized medical system in North America.

ROLLING BACK THE GAINS

The initial funding agreement for Medicare was 50-50, with federal and provincial governments sharing the cost. In 1977, the federal government dropped its share of medical funding to 20 percent. In Canada, the government pays 70 percent of medical costs, while individuals and private insurance companies pay the rest. (This proportion is reversed in the United States.)

The result was round after round of cuts to hospital budgets and other medical services. Medical care was still free, but there was less of it available. The more services were cut, the more individuals had to purchase insurance, pay out of pocket or go without.

In 1984, the federal government passed the Canada Health Act to reassure nervous Canadians that Medicare was safe. Universal access to medical services was guaranteed on paper, but no funds were provided to implement the principle, and politicians began to prepare the ground for privatized healthcare.

The Canadian medical system is currently so underfunded that the country’s supreme court declared in 2004, “The Canada Health Act [does] not promise that any Canadian will receive funding for all medically required treatment.”

Tens of thousands of nursing jobs have disappeared at the same time that hospital stays have been cut, so that fewer nurses care for much sicker patients. Deadly infectious diseases sweep through hospitals that no longer have enough cleaning staff. Most rehabilitation and chronic-care facilities have closed or gone private, transferring the burden of caring for the infirm to their families.

Hospital out-patient clinics have closed, and discharged hospital patients are now directed to family doctors for followup. But there are not enough doctors to meet the demand. By 2006, fewer than 10 percent of Ontario family doctors were accepting new patients. Currently, five million Canadians (one in six) have no family doctor. Patients can wait weeks to see a doctor, months to see a specialist and many more months for treatment.

It took a revolution in France to scare Germany into establishing Europe’s first national medical plan in 1883. In Britain, the National Insurance Act of 1911 was rushed through Parliament during a strike wave. And Canadian Medicare was consolidated in 1972, the year of the Quebec General Strike.

The United States is the only industrialized country without a national medical plan, because the U.S. labor movement has been too weak to win it. During the Great Depression, President Franklin Delano Roosevelt conceded the New Deal, but excluded national Medicare. To quell the protests of the 1960s, President Lyndon B. Johnson conceded Medicare and Medicaid, but held the line on universal coverage.

If allowed to vote on the matter, most Americans would choose a universal healthcare system. For example, in November 1998 well over 70 percent of voters in Illinois supported a nonbinding referendum calling on state legislators to enact “a plan for universal healthcare coverage that permits everyone in Illinois to obtain decent health care on a regular basis.”

When profits matter more than human rights, however, medical care is rationed. People get only what they can pay for, or what employers, insurance companies and governments decide to give them.

The only way to provide medical care as a human right is to provide universal access, so that the CEO, the factory worker and the homeless addict would all receive the best medical care that society can provide.

One cannot eliminate class divisions in medicine without also eliminating them in society, so capitalism keeps universal access off the agenda. We are not allowed to question whether medical care, or any essential service, should be rationed. We can dispute only the form and extent of this rationing.

Under our medical system, the priority is to cut costs, maintain profits and keep workers under control. We have class based, treatment-oriented healthcare where the rich have access to the best services, the middle class and skilled workers have limited access through pooled insurance programs, and the poor are provided with a bare-bones assortment of government funded services.

What we need is universal access with an emphasis on illness prevention and social health. That will take a fighting labor movement that rejects medical rationing, fights for universal medical care and keeps on fighting to end all class inequality.

Susan Rosenthal is a practicing physician, author of Class, Health and Health Care (2008), and a founder of International Health Workers for People Over Profit healthworkersinternational.org. This article is excerpted from “The US and Canada: Different Forms of Medical Rationing”

Check out all of The Indypendent’s healthcare coverage in this issue:

Conspiracy Nation: Right-wing demagogues reach out to a supposedly beleagured white middle class, telling them they are being squeezed by parasitic traitors from above and below by Chip Berlet

The Myths of Canada Care by Susan Rosenthal