Since bursting on the scene in 1999 as WTO officials who would defend everything in the name of the free market from vote buying to Hitler’s economic policies to buying vouchers for human rights abuses, the Yes Men have re-imagined political theater for the digital generation.

They have gone on to pose as Halliburton, ExxonMobil and Dow Chemical spokespeople at high-powered business conferences, where they make outrageous proposals – such as turning the victims of climate catastrophes into candles – that are met with applause. Most recently, they presented an alternate reality with their edition of the New York Times that declared, “Iraq War Ends.”

They have a new movie coming out chronicling their adventures, The Yes Men Fix the World, and some elaborate new stunts that, unfortunately, we can’t reveal. But the Indypendent was able to sit down with Andy Bichlbaum and Mike Bonanno, the mad geniuses behind the Yes Men, to talk about politics, comedy, Abbie Hoffman and a three-foot golden penis.

Arun Gupta: What are the Yes Men?
Mike Bonanno: We all are the Yes Men. Yes Men are people who had enough and can’t take it anymore. We’ve been Yes Men for too long. We’ve been letting the world be sold off. The Yes Men are people who are standing up against that.
Andy Bichlbaum: We get ourselves invited into business conferences and give presentations as enormous evil corporations and we agree with our enemies excessively, hoping that our audiences are appalled.

AG: What do you do?
AB: We impersonate people in power and infiltrate their business meetings and surprise them, publicly humiliate them. We are kind of like vigilantes. It’s not just comedy. We have a flexible identity and we mean different things to different people. But if you say you do political comedy and cite the “Daily Show,” they’ll say, “Oh yeah, cool,” and actually listen to what you are saying.

AG: How did you get started?
MB: We got started by accident when Andy put up a fake website for the World Trade Organization in 1999 and people started writing for advice and questions. Eventually people started inviting us to conferences and we realized we didn’t have to be the WTO to go. Pretty soon we had been to half a dozen conferences. No one objected no matter how ridiculous the thing we proposed.
AB: We got invited a textile conference in Finland as the WTO by a technical university. We lectured about the WTO’s solution to various problems, including the problem of modern slavery. The problem of modern slavery is they are across the world in places you don’t want to go, so you have to control them remotely and you want hands-free operation. The natural place to mount a view screen is at the crotch. We developed “the employee visualization appendage,” basically a 3-foot golden penis. People from major corporations were in the audience, including DOW Chemicals. They applauded.

AG: Are you more Abbie Hoffman or Situationist?
AB: Abbie Hoffman. He wanted to take the counterculture of the 60s and turn it into a political movement. He was about mobilizing people to force change to happen. That’s our ideal. The Situationists were more about happenings to change force with people, which I think is too utopian. We are trying to reach people who are not political and mobilize those people who are. This is the moment to take risks because Obama is president and we’ve just gone through the economic crisis, and historically that’s when things have changed. Like the New Deal.
MB: What Abbie Hoffman did, and I wish we could do, was motivate thousands of people. We are doing these stunts that we broadcast in a large way; it entertains people. The Situationists were similar but they intellectualized it a lot more. It was a different time, and the French are a special situation; they still kidnap their bosses. The overlap between art and politics was not considered gratuitous. The Situationists had a history of hundreds of years of activist-intellectuals.

AG: Tell me about a favorite prank?
AB: The real New York Times that comes out every day is a prank. But the fake New York Times we put out after Obama’s election got thousands of people to look at things a little different, briefly. It was physical; there were people in the street doing something, rallying people to a specific goal. It was populist. It felt closer to organizing that other stuff that we have done. The paper should have said more clearly we have to take to the streets to force Obama to be who we are electing him to be.
MB: The New York Times stunt was great in the way that it engaged the power shift. For a long time we have all been engaged in tactics of resistance. This put people in the position where they were thinking about creating and not just resisting.

AG: What are some of the shocking statements you have made?
AB: At a post-Katrina conference on Gulf Coast reconstruction, we posed as Halliburton officials and were talking to a lot of insurance executives. We said the Biblical Flood and the Black Plague were not so bad after all because disaster can be an opportunity.
MB: Look at Noah he ended up with a monopoly of the animals. It was a great thing for his business.
AB: Look at the press Noah got! At the end of the talk when we presented the “Survivaball,” Halliburton’s disaster technology, the insurance executives applauded.

AG: What do you think is the impact of what you do?
AB: Cheerleading. We’re trying to drum up enthusiasm and show the cracks in the system.
MB: What we have done really well is encourage other activists. We hear from activists who say, “We are so glad you’re doing this. These corporations are not impregnable; they’re not monolithic.” We are having an incremental effect on the culture at large. We are trying to encourage more people to engage in direct action and to get in the streets.

AG: Why do you hate freedom?
AB: I hate freedom because it means that billions of people don’t have freedom. I hate the freedom of Dick Cheney and the freedom of Andrew Liveris (the CEO of Dow Chemical) to do what they please. Because it means the people of Iraq and people of Bhopal don’t have freedom.
MB: the whole idea of freedom has been so co-opted. We are supposed to think that freedom is the same thing as economic license, the freedom to use your money however you want. Things like socialized medicine actually give people freedom because you can quit your job and not worrying about dying. In the United States, freedom is used as rhetoric, to argue for anything and really bad policy. If you asked people who supported Guantanamo why, they said it was to preserve our freedom. 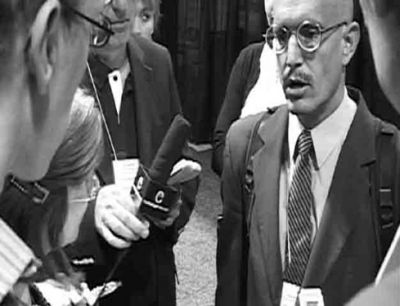 Jan. 2001
While representing the WTO at a textile conference in Finland, Andy convinces attendees that the only way to maximize profits in modern-day sweatshops is constant surveillance of workers abroad. Andy then models the “Employee Visualization Appendage” — a gold leotard, complete with a three-foot-long phallus with a video screen at the end.

Dec. 2004
On the 20th anniversary of the Bhopal chemical disaster, Andy appears on BBC as a representative from Dow Chemical Company. He claims full responsibility for the tragedy and announces a multi-billion dollar compensation package for the victims.

May 2006
Posing as Halliburton spokesmen at a trade show, the Yes Men demonstrate how a large inflatable orb-shaped suit, “SurvivaBall,” can keep corporate managers safe from the ravages of global warming. SurvivaBall’s features include “nutrient gathering capacities, on-board medical facilities, and a daunting defense infrastructure,” to keep corporate profits flowing.

June 2007
At GO-EXPO, Canada’s largest oil conference, the Yes Men propose using the bodies of climate change victims as a new kind of fuel for the oil industry, known as Vivoleum. Posing as representatives from Exxon/Mobil and the Natural Petroleum Council, they hand out “commemorative candles” allegedly made from the flesh of an Exxon janitor who died as a result of cleaning up a toxic spill. 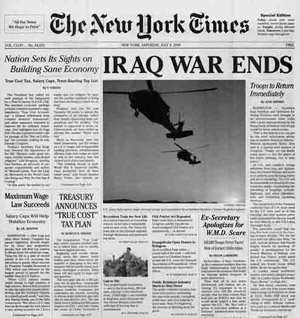 Nov. 12, 2008
Following Obama’s election, the Yes Men, along with other activist groups, hand out tens of thousands of a fake edition of The New York Times. Headlines include “Iraq War Ends,” and articles in the paper announce the creation of national healthcare, a maximum wage for CEOs and a statement from George Bush admitting he committed treason during his presidency.