At 4 a.m. Monday morning, the Yes Men and hundreds of volunteers began handing out tens of thousands of copies of a spoof New York Post with a cover story titled “We’re Screwed.” The subhead reads, “What you’re not being told: Official City report predicts massive climate catastrophes, public health disasters.” 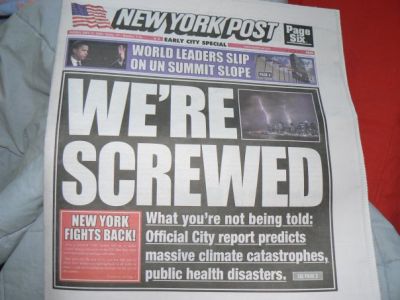 In an interview with The Indypendent, the Yes Men’s Andy Bichlbaum said of the paper, “It’s all real, it’s all assiduously researched. We had climate experts working on it. We had a lot of professional writers and journalists.” 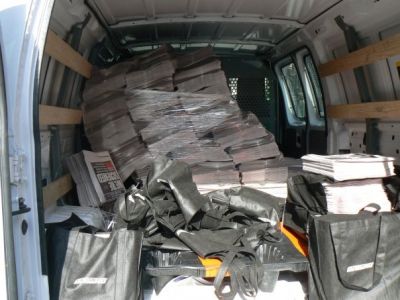 The 32-page paper includes spoof advertisements and was designed to look just like a real copy of the New York Post.  Bichlbaum said, “It’s in the Post’s style—because it’s the clearest. They publish things very brutally clearly, but they publish bullshit most of the time. So what we’re doing is publishing what’s important in the language that anyone can understand.”

The paper’s release comes the day before the start of the U.N. Summit on climate change in New York, in which General Assembly President Ban Ki Moon will push 100 world leaders to make a serious commitment to help reduce climate change, ahead of the major Climate Summit in Copenhagen in December.

Bichlbaum is critical of the U.S. government’s efforts on helping curb climate change.”The Congress passed an enormously insufficient climate bill this summer called Waxman-Markey… it’s terribly insufficient and the Senate isn’t even considering that bill. There’s a good chance nothing will be passed and Obama will go to Copenhagen empty handed, without any enforcement possibility, without the ability to sign a treaty,” Bichlbaum said.

The release of the fake New York Post is part of Climate Action week where activists hope to create, in the words of Bichlbaum,  “An outpouring of public outrage [so lawmakers] will pass something much stronger than Waxman-Markey that Obama can then take to Copenhagen. Its about saying. ‘Look ‘we have to do something now. Now is the time, and lets do it”, 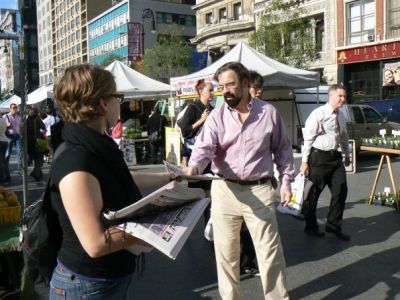