The Yes Men’s Andy Bichlbaum was arrested and seven others were ticketed at a ‘Survivaball’ demonstration on the East River at 21st St, at approximately 10am Tuesday morning. 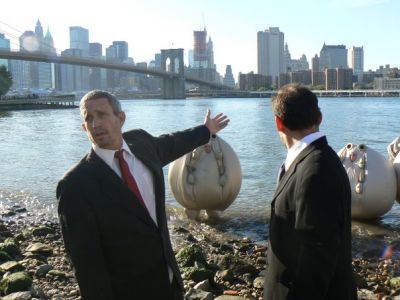 The seven ticketed and Bichlbaum were among the 25 Yes Men who participated in the fake press conference promoting the ‘Survivaball’. According to sources, they were issued summons and ticketed for disorderly behavior and creating hazardous conditions. Bichlbaum was arrested and remains in central booking. His charges are unknown.

SurvivaBalls (www.survivaball.com) are climate-controlled, self-contained suits designed to keep corporate executives safe from man-made climate disaster. The current price tag is three million dollars. To learn more about the ‘SurvivaBall’ watch this video: On Monday, three volunteers handing out copies of the Yes Men “We’re Screwed” edition of the New York Post outside the NewsCorp building were detained by police. According to Mike Bonanno of the Yes Men, the incident occurred after a Yes Men handed Rupert Murcdoch, the owner of the real New York Post a copy of the Yes Men’s fake version.Bonanno also says that some media outlets have begun picking up some of the news stories in the Yes Men’s fake New York Post that have been thus far ignored by the press. 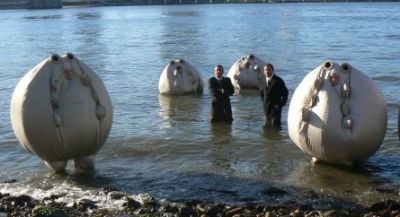