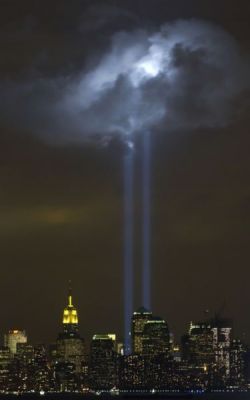 The drizzle on my face tingles and beads into drops that roll down my shoulders. The whole sky sweeps around me until I look at the city and then memories pour back into my eyes.

I’m in Brooklyn, on my roof on the eighth anniversary of 9/11 and across the skyline of thick rain clouds I see the blue-white Tribute of Light shooting up from Ground Zero. I hook thumbs into my pockets and study it. Churning clouds smother the light causing it to look like a sulfur-fire as if downtown was still burning, as if it was the first night of the attack, as if the steel were melting into orange liquid trickling in the wreckage, searing a hole between life and death into which drips those being cooked. Every year after it was cleared, the city beams light into the sky and from a distance it looks like souls fleeing the pain below.

I step back and think of funerals with candles glowing around coffins. We use light to peer into death, to glimpse loved ones, to illuminate loss. The Tribute of Light is that act magnified by money and technology. The immensity of the tragedy demands it but what of others? I peer over the roof at the doorway below where a neighbor’s son what shot and killed and imagine a light shining there. I look down the street and imagine more light rays, one for each boy killed during the summer by a hail of bullets. I look up and see the city brighten like sunrise as each death breaks its silence.

What would we see about ourselves in that brilliance? Would drivers stop by bridges and pray at the place where the unseen poor froze like stones? Would satellites see the glow of the thousands dying each day from dirty water? Would the earth pulse like a second sun, irradiating space with our sorrow?

“No,” I said aloud, “That’s too easy.” The last imaginative leap assumes someone out there cares but no God exists to see us. No cosmic consciousness is tallying our worth. Space is empty. We are alone and we are the only ones who can save us. I study my hands in this metaphorical light, one only I can see but one that shows the invisible cause and effect that ends in catastrophe. It is the subconscious knowledge of my complicity that seeps into my eyes, even when I close them.