Despite appearances, the Obama administration has a clear strategy regarding healthcare: it is state-supported capitalism or, more simply, privatization.

It may seem counter intuitive, when town hall mobs shriek about Obama’s communist healthcare policy. But the White House is nothing if not consistent. Virtually every one of its economic policies — the bank and auto bailouts, the stimulus package, cap-andtrade energy plan, Social Security, the home owner rescue, education and healthcare — hews to neoliberal orthodoxy of privatization, deregulation, liberalizing capital flows and individual responsibility.

How did it come to this, where disgruntled white reactionaries are the ones in the streets, the Democratic Party and a “transformative” president are waging upper-class warfare, a defeated Republican Party has been reborn, and liberals and progressives are paralyzed, not wanting to support a terrible healthcare plan while unsure how to respond to the racist vitriol being unleashed?

It’s the inevitable outcome of the defeat and splintering of the left in the 1970s and the simultaneous rise of the new right that joined social conservatives with economic conservatives by using culture wars as a cover for neoliberalism.

By the mid-1970s, the share of income and wealth going to the richest Americans was at a low point for the 20th century. At the same time, muscular workers’ movements were demanding better wages and benefits, while 1960s-era social movements were agitating for their share of the pie.

The right had already learned to use racial scapegoating to convince many whites to vote against their material interests. Richard Nixon first used race-based appeals to win the White House, but Ronald Reagan combined it with a project of class restoration.

Today’s Tea Parties are tied to the new right foundations, think tanks, media and grassroots groups that were incubated in the 1970s. But how did the Republicans enlist the white working class as the shock troops in their own destruction?

This is where neoconservatives come in. Neoliberalism is about freeing up capital to maximize profit, the freedom to exploit anywhere, anytime, anyhow. It requires a strong state for policing and surveillance, to keep the population in a state of economic anxiety, and to transfer public wealth to the rich and corporations, and laws and regulations to prevent worker organizing.

There is a fundamental problem, however, as David Harvey explains in A Brief History of Neoliberalism, “The anarchy of the market, of competition and of unbridled individualism … generates a situation that becomes increasingly ungovernable.”

Neoconservatism bridges neoliberalism and social conservatives by using deeprooted themes of nationalism, moralism and militarism to mobilize support of “the neoliberal agenda of elite governance, mistrust of democracy and maintenance of market freedoms.”

The right invokes the threat from within and without — communism, immigrants, Muslims, terrorists. It wages culture wars against permissiveness, typically demonizing sexual freedom, expression and orientation, and appeals to family values, Christian evangelicalism, traditionalism and patriarchy. Anti-intellectualism is rampant, both in contempt for evidence and logic and as a visceral response to the new “elites” — intellectuals, scientists and cosmopolitans.

Then, there is the red-white-and-blue free market, which is equated with freedom and democracy. Resentful whites are told they work hard, can be wealthy and should not have to support the parasitical “other.” Many Evangelicals play a role by replacing the Poverty Gospel with the Prosperity Gospel — “the belief that God rewards signs of faith with wealth, health and happiness.”

A PARTY OF NONE

The Democrats don’t stand for anything. As a party, they depend on social and political movements for votes — labor, women, Blacks, Latinos, environmentalists, peace activists and the LGBT community — but they need money from the wealthy to run their political machines and campaigns. Unlike the right, there is no narrative or ideology that joins these movements beyond a laundry list of demands. Thus, the mainstream of each movement pursues its narrow self-interest, never able to advance its agenda significantly in terms of legislation or policy.

Once elected, Democrats are obliged to pay off their funders by passing pro-corporate, pro-wealthy legislation.

Obama’s response to Wall Street’s self-induced catastrophe includes rescuing investment banks, large stockholders and autocompany bondholders, and stonewalling any meaningful regulation of the finance industry. His administration is eyeing cutting Social Security to close budget deficits. Its global warming policy, cap-and-trade, would give away billions in tradable permits to major polluters while creating a massive new speculative market in carbon trading for Wall Street. His education policy is to shut down thousands of “under-performing” public schools and replace them with charter schools as a way to decertify teachers unions.

Apologists say the Democrats can only do what is politically possible. This excuse ignores the fact that the right never worries about what’s “possible,” and it justifies surrendering to the Republicans on every issue.

Philosophically, the left needs to clamber out of its post-modern sinkhole of relativism and subjectivity and develop a unifying grand narrative of history. Practically, it also means remaining independent of the Democrats. They are not as vicious as the right, but because their base gets lulled into complacency, they can still do tremendous damage. 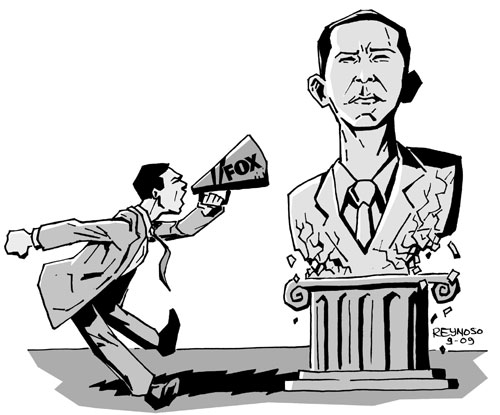 The heart of President Obama’s plan is to cut funding for public healthcare, Medicare and Medicaid, and shift it to the private sector.

The day after Obama’s national healthcare speech, U.S. House Speaker Nancy Pelosi said, “half the bill will be paid for by squeezing excesses out of the [Medicare and Medicaid] system. And there is $500 billion to do that, and we’re looking for more.”

Under the plan released Sept. 16 by Sen. Max Baucus (D-Montana), chair of the Finance Committee, the government will use hundreds of billions in those funds to subsidize insurance for Americans with annual incomes up to $66,000. They will have to buy insurance or face penalties of up to $3,800 a year.

The Baucus plan defines “affordable” as 13 percent of household income, not including co-payments and deductibles. It allows issuers to vary premiums by as much as 650 percent based on age, tobacco use and region. So if a policy cost one family $500 a month, another family could be charged $3,750 a month for the same policy. The Baucus plan would open the door to taxing employer-provided healthcare.

The bill explicitly allows insurers to “limit the number of enrollees,” in other words, deny coverage. And, according to the Congressional Budget Office, in 2019 there would still be 17 million people uninsured.

While the “Tea Party” mobocracy was created, funded and manipulated by the new right network, the anxiety is real: the Obama administration could unleash forces that undermine many people’s healthcare coverage. For example, the Baucus plan’s standards are so weak that one New York Times commentator observed, “Larger employers could offer coverage with extremely high deductibles and limited benefits without penalty, which their workers would be required to take unless it was extremely expensive.”

The healthcare industry is certainly happy. Starting in the spring, the White House has convinced insurance, hospital and pharmaceutical companies to forgo some future revenue. In return, the Baucus plan will force millions into the arms of the insurance industry. Drug companies will get millions of new customers, and hospitals will see fewer losses from providing care to the uninsured. Forgoing some revenue isn’t so much a loss as an investment.

Yet the Obama administration is not doing the healthcare industry’s bidding just out of ideology. It’s about power politics.

Jane Hamsher, founder of the FireDogLake blog, explained that aides to Sen. Baucus told healthcare industry lobbyists last May their participation in “crafting a health care bill was contingent on them ‘holding their fire.’”

The Obama administration had three goals in giving the healthcare industry the keys to the treasury. First, the companies would not advertise against the Obama plan, like the industry did with its infamous Harry-and-Louise ads that scuttled Bill Clinton’s plan. Second, “Keep them from torpedoing vulnerable Democrats in 2010 so there isn’t a repeat of 1994.” And third, “Keep their money out of GOP coffers.”

Healthcare reform is really being driven by bare-knuckled, backroom politics.

That’s change you can believe in.
—A.G.

Check out all of The Indypendent’s healthcare coverage in this issue:

Conspiracy Nation: Right-wing demagogues reach out to a supposedly beleagured white middle class, telling them they are being squeezed by parasitic traitors from above and below by Chip Berlet

The Myths of Canada Care by Susan Rosenthal