All eyes will be on the United Nations Framework Convention on Climate Change this December as global leaders descend on Denmark to pass what many hope will be the monumental resolutions needed to confront the consequences of human-caused global warming. Environmental groups worldwide, however, have been cranking up the heat through direct actions ahead of the conference in an effort to push politicians to adopt more aggressive stances. They say it is time to use people power to confront the governments, economic policies and corporations that stand in the way of real change.

CANADA — Shell Canada temporarily shut down its Albian tar sands oil mine in Alberta Sept. 16 after 25 Greenpeace activists chained themselves to giant earth-moving equipment for 30 hours on the eve of a meeting between Canadian Prime Minister Harper and President Barack Obama. Indigenous groups including the Athabasca Chipewyan First Nation have sued Shell Canada to protect threatened traditional lands. The U.S.-based Indigenous Environmental Network joined a coalition of other groups to sue U.S. Secretary of State Hillary Clinton in an effort to block the construction of an oil pipeline that would carry crude oil from Alberta to Wisconsin. 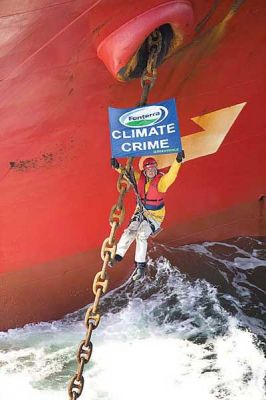 NEW ZEALAND — Twelve Greenpeace activists secretly boarded a large shipping vessel outside the port of Tauranga on Sept. 16 and locked themselves to the ship’s anchor chain and four cargo cranes to prevent the company, Fonterra, from unloading palm kernel animal feed. Indonesian and Malaysian rainforests are being clearcut to make way for palm crops. “Fonterra’s involvement in rainforest destruction and the massive climate impact this causes are criminal,” said Jo McVeagh, an activist who locked herself to one of the cranes. The environmental group is also urging the country to curb its dairy farms, since cows are a top source of methane, a greenhouse gas.

THAILAND — People representing more than 100 indigenous communities worldwide rallied at the U.N. Climate Change Talks in Bangkok Sept. 28 to Oct. 9 to urge delegates to reject a provision in the proposed climate treaty that would make forests a commodity in a new global carbon market, and to recognize the U.N. Declaration on the Rights of Indigenous Peoples. The groups are targeting the U.N.’s Reducing Emissions from Deforestation and Degradation (RE DD) and the Clean Development Mechanisms (CDM) programs that would allow for forests to be sold as carbon credits to fossil fuel-burning polluters who seek to offset their carbon footprint. “Using the forests of the [Global] South as a trading commodity within RE DD initiatives gives a … permit to the polluters of the North to perpetuate toxic pollution, genocide and the violation of treaty rights in the homelands of our communities,” said Environmental Indigenous Network Executive Director Tom Goldtooth. 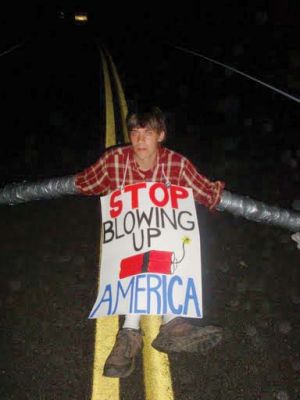 WEST VIRGINIA — The campaign to end mountaintop-removal mining continues to gather steam as four activists and a journalist were arrested Sept. 9 for blocking a road outside the regional headquarters of the coal company Massey Energy. In September, two Climate Ground Zero activists were arrested after staging a tree sit demonstration that temporarily halted work at a Massey mountaintop removal mine. Last June, NASA’s top climate expert James Hansen was arrested in West Virginia during a mountaintop- removal mining protest.

NEW YORK — Less than three months before Copenhagen, the Sept. 22 U.N. Summit on Climate Change brought in some 100 world leaders to New York City for a day of speeches that were heavy with urgency, while at times drowning in rhetoric. Maldives President Mohamed Nasheed gave a passionate appeal for the world to act before their Indian Ocean islands disappear under rising sea levels. “If things go business-asusual, we will not live, we will die,” Nasheed said. Bolivian President Evo Morales criticized the global economic order, saying, “Climate change is not a cause, rather an effect. It is a product of the capitalist system, which favors the obtaining of the maximum profit possible.” Across the city at Columbia University Sept. 24, activists with Climate SOS and Rising Tide North America presented a 14-foot “$2 trillion bill” during a lecture by Danish Climate and Energy Minister Connie Hedegaard. The bill is the estimated size of the new market in carbon dioxide emissions allowances that would be established by the Waxman-Markey climate bill that passed the U.S. House of Representatives in June — a plan that would prove lucrative for the largest polluters.

UNITED KINGDOM — U.K. Climate Camp activists blockaded the Royal Bank of Scotland (RBS) headquarters in London Sept. 1, while a dozen others dressed as construction workers glued themselves together on the second floor to protest the bank’s investment in the fossil fuel industry. “RBS is 70 percent owned by the public, but it is completely against the public interest for our money to be used to fund climate change,” activist James Clarke told SkyNews. On Oct. 17–18, the Climate Camp plans to target a top U.K. coal-fired power plant located in Nottingham. A blogger at Earth First! Action Reports noted that E.ON, the owner of the power plant, has been installing a new 12-foot chain-link perimeter fence. 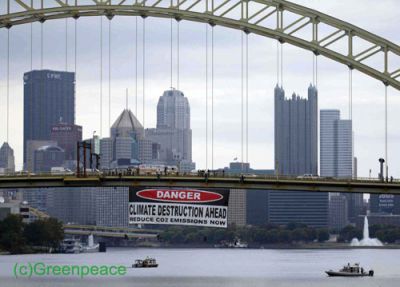 PITTSBURGH — Greenpeace struck again Sept. 23 ahead of the G20 summit. Nine activists were arrested after they rappelled from the West End bridge to unroll an 80-by-30-foot banner reading “Danger: Climate Destruction Ahead: Reduce CO2 Emissions Now.” “It is imperative that developed countries’ world leaders do not fail again in Pittsburgh,” said Damon Moglen, Greenpeace USA’s global warming director. “They must put money on the table to support developing countries.” But the G20 nations failed to do that, as leaders from the world’s biggest economies couldn’t agree on how to help developing nations fight climate change.

ALASKA — The Inuit Circumpolar Council hosted the Indigenous People’s Global Summit on Climate Change in Anchorage last April to prepare statements and recommendations to the U.N. Copenhagen climate conference. The declaration, which was reissued before the September Bangkok meeting, stated, “Mother Earth is no longer in a period of climate change, but in climate crisis. … Indigenous Peoples have a vital role in defending and healing Mother Earth. We uphold that the inherent rights of Indigenous Peoples … must be fully respected in all decision- making processes and activities related to climate change.” The conference follows the Seventh Annual U.N. Permanent Forum on Indigenous Issues in 2008, which focused on climate change. Indigenous peoples say they bear the least responsibility for global warming. “For generations, we have managed ecosystems nurturing its integrity and complexity in sustainable and culturally diverse ways. Our customary resource management systems have proven to be ecologically sustainable, low-carbon economies,” the declaration said.