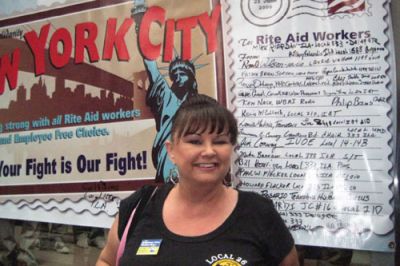 Rite Aid warehouse worker Angel Warner stood before a crowd of dock workers, cookie makers and other unionists gathered outside the corporation’s annual shareholder meeting on June 25 in New York City. Warner had traveled from the Mojave Desert city of Lancaster, Calif., where she works at a sprawling million-square-foot warehouse that distributes merchandise to hundreds of Rite Aid stores throughout Southern California.

She was in Times Square to tell the union rally that Congress needed to pass the first major labor law reform since the Taft-Hartley Act of 1947 barred the sit-down strikes that built the labor movement during the 1930s.

“If the Employee Free Choice Act were enacted right now,” Warner said, “we wouldn’t have had to wait two years before we even got our vote. We wouldn’t have lost all the workers that we’ve lost.” She explained that Rite Aid “would have gotten more than just a slap on the hand” when it was charged with 49 labor law violations for firing pro-union workers. “They had to hire two workers back, but all they had to do was pay them back pay minus unemployment.”

Three years earlier, in March 2006, some of the 700 workers at the Lancaster warehouse contacted the International Longshore and Warehouse Union about organizing a union. Among their chief complaints were abusive management practices and harsh conditions in the distribution center, which Warner described as “burning hot in the summer and so cold in the winter that it’s like working in an icebox.”

Union supporters say managers responded to the organizing drive with a harassment campaign that included weekly anti-union meetings in which workers were warned of high dues and told unions resulted in plant shutdowns. Warner told a reporter for The Washington Monthly that since June 2006 more than 100 union supporters have been fired at the warehouse, while about 10 non-supporters were let go during the same period.

Nonetheless, in March 2008, 52 percent of workers voted in favor of unionizing. As of this October, however, workers are still without a contract. They claim management is using work rules to punish workers and is stalling on a contract because current labor law allows a company to delay endlessly without penalty.

The case of the Lancaster workers is hardly unique. According to the AFL-CIO, “Even after workers successfully form unions, 44 percent of the time they can’t get a first contract.”

Angel Warner and her colleagues say the rules are set against them. That’s why passing the Employee Free Choice Act (EFCA) is labor’s number one goal. Today, only 12 percent of U.S. workers are in unions, and just 7 percent in the private sector, down from a peak of 35 percent in the 1950s.

Mild penalties mean employers freely use union-busting tactics. They can fire union supporters and even if workers prove the firings were illegal, the company only has to re-hire them with back pay, minus what they earned elsewhere. Management can legally force workers to attend anti-union meetings and if it engages in unlawful intimidation, at worst it will have to post notices in the workplace promising not to commit such infractions again.

If an organizing drive gets 30 percent of workers to sign cards authorizing a union to represent them, allowing for an election, management can delay the election long enough to stop the organizing altogether. If workers win a unionization vote, management can bargain indefinitely as long as it does so in “good faith.”

Despite the urgent need for labor law reform and the fact that labor reportedly pumped $350 million into the Democrat Party in 2008, enabling its sweeping electoral victory, the business lobby has pressured congressional Democrats to back away from EFCA one by one, like Blanche Lincoln of Wal-Mart’s home state of Arkansas. Senators like Lincoln have bargained away what was once the heart of EFCA, called “card check.”

Card check would let workers form a union if a majority sign cards saying they want one. This would take away employers’ ability to ignore the cards and demand secret ballot elections. Many government workers currently organize through card check. The Hawaiian legislature just gave this option to farm workers and others in the state not covered by federal labor law.

But a coalition of conservative anti-union organizations including the National Right to Work Committee and the U.S. Chamber of Commerce — the nation’s largest lobby — has successfully painted card check as an anti-democratic measure that would nullify workers’ right to a secret ballot. Backing them up is PR impresario Richard Berman, famous for defending Big Tobacco, who set up misinformation mills with names like Center for Union Facts and Employee Freedom Action Committee.

A U.S. Chamber of Commerce television ad charged, “Congress wants to strip away the secret ballot. The private vote is so important to our basic fundamental rights. A bureaucrat in Washington could never tell any private enterprise how to run their business. This is going to devastate medium-sized and small businesses.” 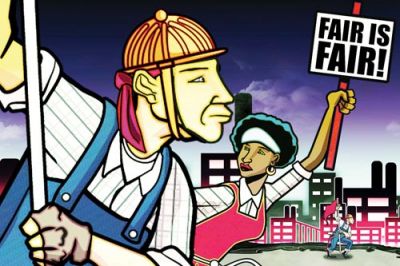 Warner still supports card check even though the AFL-CIO leadership seems to have abandoned the idea. “The Employee Free Choice Act doesn’t take the right to a secret ballot vote away; it just puts that right in the employees’ hands instead of the employer.”

The labor federation continues to fight for another important provision of the Employee Free Choice Act that has a better chance of passage. The bill would push contract talks into binding arbitration after 120 days if talks and then mediation fail. This would apply only to first contracts of brand new unions.

The act would also toughen penalties for employer misconduct, such as allowing for fines of up to $20,000 for each violation during an organizing campaign and tripling back pay damages for employees who are illegally discharged.

Warner and her fellow unionists traveled to Rite Aid’s shareholder meeting in June to demand a contract. Warner said it’s “almost going into a year and a half since we won the vote and have been bargaining, and they’ve been dragging their feet, and they’re trying to decertify us. This would not have happened if after 90 days we did not have a contract, a mediator would have stepped in, and we would have gotten a contract by now.”

Just the threat of going into arbitration can help, says Josh Goldstein, spokesman for American Rights at Work, a union supported group in Washington. He explains that arbitration is an option in many states, particularly in the public sector, and in those instances “80 percent of those negotiations come to a first contract without the use of arbitration. And just having that as an option helps to create bargaining between employers and employees.”

The U.S. Chamber of Commerce and other groups funded by big business fight back with huge pools of money — and misinformation.

The chamber’s resources are seemingly limitless. In a February report, the Center for Responsive Politics found it spent more than $144 million trying to sway Congress during the 2007–2008 election cycle. Adding in other allied business groups, that figure tops $215 million. That buys a lot of political support.

Despite its carefully cultivated “Main street” image, the chamber is dominated by large corporations and opposes any centrist or progressive regulation that could threaten these companies’ short-term profits. Climate change, healthcare and labor law reforms are all targets.

Using front groups with names like “The Alliance to Save Main Street Jobs,” the Chamber wages a propaganda war to make unions seem un-American. It doesn’t just go after a policy. It goes after unions’ very ability to fight and have credibility with the public.

The National Right to Work Committee, which formed in the 1950s took the gloves off in its recent ad campaign against labor law reform, implying that union leader are thugs who will take away American’s freedom and that unions destroy the economy: “Millions of workers and small businesses will be forced under big labor control in the blink of an eye. And during these tough economic times, that’s something we literally can’t afford.”

Another piece of misinformation was generated by the Alliance to Save Main Street Jobs. It released a study saying the Employee Free Choice Act would kill 600,000 jobs. The report, written by a woman with no credentials in this field of economics, was easily debunked by Center for American Progress and the Economic Policy Institute, but its message made waves.

The claim that big business has the interests of small businesses at heart has been a successful talking point for big business over the years. Home Depot, Bank of America and Koch Industries are some of the big corporations opposed to labor law reform. The Chamber of Commerce is by definition a coalition of businesses of all sizes, so it wraps its anti-union ads in the message that it is protecting small business.

NYU historian Kim Phillips-Fein, author of Invisible Hands: The Making of the Conservative Movement from the New Deal to Reagan, hears in today’s fight the echo of anti-union messaging going back to when the National Right to Work Committee started.

She says the organization took a new approach in the 1950s by “talking about the fight against unions in terms of rights … translating what had previously been just a reactionary dialogue into something that sounded positive and forward looking. This group was going to come in and protect workers from unions.”

“The focus had always been on employers stopping people from joining,” says Phillips- Fein. The National Right to Work Committee “turned it around to say that unions are coercing people to join them.”

Today, adds Phillips-Fein, “We have employer groups saying unions are exercising this coercive power, they want these card check movements, they want to take away your right to a union election, and it’s really overlooking the whole framework in which it’s so difficult for workers to choose to have a union. It’s really brushing that aside, and saying, ‘No, actually, the problem is that unions are undemocratic.’ So it’s the same kind of language.”

Organizing Director Ricardo Valadez said the 25 Jobs with Justice coalitions in 23 states had mixed success. “Some have held meetings and have had fruitful discussions. Others were denied meetings and others were invited to a debate which was good, which was healthy.”

But a lot is at stake for big business — and its Republican allies. White men in unions were twice as likely to vote for Barack Obama as white men in general, who went for John McCain by 16 points. You don’t need donations from Wal-Mart or Home Depot to convince you to get on board if you are a Republican counting votes.

Nor do you want to give unions the ideological advantage in a downturn when people wonder, maybe for the first time, whether companies really have their best interests at heart and whether they as individuals really have the economic power to control their own lives.

Will pro-labor Democrats be able to summon the 60 votes to overcome an inevitable Republican filibuster? We may know as early as December.

Abby Scher is a sociologist and editorial director of the progressive think tank Political Research Associates.