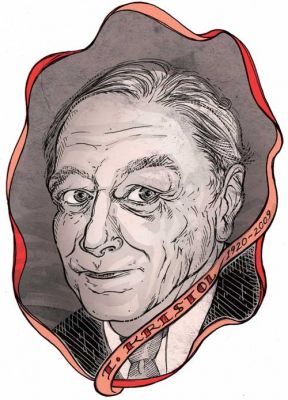 Irving Kristol, who died at age 89 in late September, was emblematic of the drift of many radical and liberal intellectuals to the political right after World War II.

He was the inspiration of the movement known as neoconservatism, which may have been the ideological spark of the Reagan Revolution. Kristol was a writer, publishing executive and editor, but his huge influence in U.S. politics was as a supreme networker, organizer and fixer.

His main achievement was to unite two wings of the conservative movement: social conservatism connected mainly to fundamentalist religious groups and fiscal conservatism, the old line of the right.

For years, the secular conservatives disdained working with religious fundamentalists. Most conservatives were not necessarily opposed to abortion, contraception and sex education. Their main beast was “Big Government” and its “mad” spending, especially on the poor. For them poverty was a reflection of personal failure or, since the New Deal, was due to government programs that fostered dependency rather than self-reliance. But to bring these historically opposed groups together, the socially liberal intellectuals had to swallow their conventional beliefs and tolerate or adhere to such traditional values as the sanctity of the family, the right to “life,” rejection ofpre-marital sex and divorce.

Kristol organized and promoted conservative think tanks, helped his son William start a conservative paper, The Weekly Standard, and was a major force recruiting intellectuals to conservative causes and, more important, conservative positions on public issues, even when, like the late U.S. Sen. Daniel Patrick Moynihan (D-NY), they remained selfprofessed liberals. A confidante of leading politicians, including presidents, Kristol did not show his face to TV cameras very often, preferring to operate behind the scenes, a spot that was far more comfortable because it kept him out of the line of fire.

Like many neoconservatives, he started out as a participant in the cauldron of 1930s radical politics. As a City College student he joined radical organizations, mainly the small but spunky movement that gathered around exiled Russian Bolshevik Leon Trotsky.

After serving in the U.S. military during World War II, Kristol worked as a writer and editor, prominently for the liberal monthly Commentary. Within a few years he shifted his allegiance to liberalism. President Franklin D. Roosevelt became one of his heroes, but under the pressure of the Cold War against communism, he was attracted to conservatism.

As managing editor he transformed Commentary into a conservative magazine; Kristol was soon well known as a leading anti-communist intellectual. Some, like his friends philosopher Sidney Hook and journalist Melvin Lasky, were willing to forge an alliance with and accept money from the U.S. government, particularly the CIA and other intelligence agencies.

Kristol spent some time in Great Britain helping to start Encounter, perhaps the leading English-speaking pro-Cold War magazine, and became the executive vice president of Basic Books, a publishing house that, for a time, shared the conservative laurels.

But Kristol was not content being an editor and manager. He was a man of vision and, at a time of resurging religious fundamentalism, was dissatisfied with the tendency of the conservative movement to stew in its own juices. His friends were not especially opposed to the social benefits enacted during the New Deal. After all, they were beneficiaries of Social Security and had enjoyed a largely free public higher education that was only ended in the late 1970s.

Kristol and his fellow neocons began their journey to the right after concluding that many fellow liberals were wishy-washy about the necessity of fighting shooting wars against Soviet “satellite” states, had come to favor nuclear disarmament and seemed to value civil liberties above national security.

In the face of these “unpatriotic” sentiments, Kristol became a vigorous opponent of those liberals he viewed as “soft” on communism. It was not long before Kristol and his collaborator, the sociologist Daniel Bell, inaugurated The Public Interest, a journal of opinion that began to focus on both foreign policy and a sweeping re-evaluation of the welfare state and other domestic matters. The magazine had a minuscule circulation but was highly influential among intellectuals and policy makers.

One of The Public Interest’s major innovations was to offer a more sophisticated version of anti-welfare politics. Saying that the poor were caught in a “culture of poverty,” among whose features was family disorganization, the neocons argued that throwing money at the problem was counterproductive. Instead, with a view to ending dependency, they advocated that the poor be made to work in order to receive a check. This position soon became conventional wisdom for city, state and national governments of both major political parties. Through this moralistic approach, Kristol had led his flock back to quasi-religious ideology, and by the 1970s the ground was laid for an alliance between two unlikely partners.

Kristol’s ultimate domestic policy triumph came during the presidency of Bill Clinton. When Congress passed the Welfare Reform Act of 1996, which wiped out the only guaranteed income program in the United States by ending income assistance after five years, Clinton dutifully signed it.

Neither the prosperity bubble of the first six years of the new century nor the current economic depression has impelled any leading politician to ask the country to revisit welfare “reform.” The powers that be still adhere to the proposition that chronic poverty is not a problem for the system, but a deficit of the poor themselves.

Kristol and Bell were also riled by the rise of 1960s radicalism. Though sympathetic to the demand of blacks for full civil rights, they were hostile to the sit-ins, mass marches and violent rhetoric of young radicals who, in alliance with Martin Luther King, were pushing the movement to the left. What irked them more were the antiwar movement and the anticapitalism of the New Left that rebelled against the war policies of Democratic and Republican administrations and often expressed support for Communist-led antiimperialist struggles in China, Vietnam and Cuba.

For Bell, Kristol and their fellow neocons, America was in the throes of mass defection by an entire generation from its sacred values and policies. They felt nihilism, cynicism and anti-establishment sentiments were turning the entire country away from the patriotism that had made it great.

Bell finally resigned his coeditorship of The Public Interest because Kristol had taken the magazine too far right, but, ever the happy warrior, Kristol kept moving further rightward. Toward the end of his life he found religion, a belief in what was once a strategy. Kristol gloried in the Reagan Revolution, whose ideology, if not always its policies, reflected those of the neocons.

During the administrations of the two George Bushes, Kristol was celebrated as a great sage and a “godfather” of the neocons. Like his long-time wife Gertrude Himmelfarb, the historian and rabidly conservative polemicist, his writings, ever more strident, became required reading in wide circles of the right, religious and secular alike. He must have taken satisfaction in the national security policies of the Obama administration, which were, for the most part, continuations of those of his predecessor George W. Bush.

Kristol also had to be pleased with Obama’s refusal to reverse Bill Clinton’s ending of “welfare as we know it,” despite the economic crisis and looming doubledigit unemployment. Of course, Obama is no neocon, but Kristol wanted mostly to make its ideology and policies the common sense, and in this his legacy remains large.