A few days after the AFL-CIO convention wrapped up in Pittsburgh last month, I had lunch with Mike Stout, a rank-and-file leader of the first order, a man who back in the 1980s was at the front of the United Steelworkers fight against US Steel’s mass shutdowns in Pennsylvania.

We were in Homestead, at a place called Mitchell’s Fish Market, which occupies the exact spot where all those years ago once sat the management office of the gargantuan Homestead steel works. The restaurant is about midway in a miles-long stretch that once held one of the greatest steel-producing operations in the country, the place that made the structural steel for the Empire State Building and the World Trade Center, the Verazano Narrows Bridge and the Golden Gate, and that was seized by FDR in 1942 to produce armor plating for World War II.

Mike recalled the phone banking and other political apparatuses that labor set up in Pennsylvania’s Allegheny County for last year’s election. It was very elaborate, very well funded and organized. It is what labor does extremely well.

Obama probably won Pennsylvania and Ohio because of that organization. There are a lot of old, white union people in both states, and as the now president of the AFL-CIO Rich Trumka said from the podium, old white labor people supported Obama by more than 70 percent, as opposed to old white non-labor people, who supported McCain by almost the same margin.

You would think, Mike Stout said, that all that organization and proven expertise could be leveraged for favorable policy on key issues, yet today even progressive Democrats have complained to him and other supporters of single-payer healthcare legislation that they wished labor would organize something besides letter-writing campaigns and phone-ins to counteract the army of industry lobbyists who pound the halls of Congress every single day.

At the AFL-CIO convention there were long hushed moments when all the delegates were busy phoning their representatives, calling or texting Congress to push for labor law reform, to push for healthcare reform.

There were no appeals from the stage to take to the streets or even to clog congressional halls with bodies of workers. There were no demands or even apparent inclination to mobilize workers to march.

While the front page of the local papers carried pictures of tens of thousands of right-wingers massing in Washington, the proceedings in the hall were abstracted from any version of what the AFL used to call Street Heat.

“I wish they’d at least threaten to get militant,” Mike Stout said. “At least they could say, if you don’t do A, B and C you don’t get this political operation, you don’t get one cent; you get opposition. Organized labor still has a club, but if they don’t use it soon they’re going to be like the old-timers reminiscing about the old times in the back of a bar.” 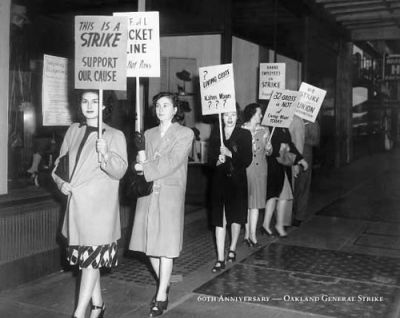 The hope of using a club, defined as making labor’s case to the wider public, activating the membership and punishing Democrats for betrayal, is what delegate after delegate to the convention, from union presidents to rank-and-file leaders of small labor councils, told me they saw in the coronation of Trumka.

It became almost a prayer: Trumka’s very presence and style will animate the unions; his eagerness to be seen and heard might change the way Americans think about unions. The pageant before Trumka’s formal pronouncement as president was full of sentimentality and tears.

The great Pittston strike of 1989-90, which took place during Trumka’s tenure as president of the United Mine Workers, was given a passing mention, but overall, as Jon Flanders, an alternate delegate from Troy, said, the message was of “the worker as iconic victim, and the great leader who will raise them up.”

For all the expressed hope and Trumka’s occasional sabre rattling, there is no sign yet that a Trumka-led AFL will be different from its predecessors, and without a heightened political energy and organization coming from the ranks, it can’t be different.

Despite all the money poured into elections — possibly as much as $350 million counting all of organized labor — unions don’t have the stroke in Congress and the White House that money is supposed to buy. People wonder why unions don’t hold the Democrats’ feet to the fire, but the belief that money must necessarily buy influence misses the harder point.

As Communication Workers of America President Larry Cohen put it, “We have expectations that come from an earlier time. I inherited a political culture based on a strong labor movement. We don’t have that. What it means to win an election in Brazil, even with the huge problems they have there, is different for unions than it is for us here. Brazil is 30 percent organized. … They have a different kind of alliance building. So they get different results [from a favorable election outcome] than we’re going to get here.”

Yet even with dwindling percentages, American unions represent 16 million people. That many people, if educated, animated, organized at the shop level, and unified in strategic alliances, have at least the possibility of presenting a formidable force.Will they? The convention offered no sign that labor as a whole was interested in its membership’s potential power outside elections. Here amid the worst economic catastrophe since the Great Depression it was almost as if that wider crisis didn’t exist.The Machinists were handing out T-shirts saying “Jobs Now” and had a room with close-up photographs of some of their 30,000 members who have lost their jobs in the past eight months. A resolution approved by the convention reminded everyone that real unemployment, affecting some 31 million people, was the worst in U.S. history and a second stimulus of job creation, modeled on the WPA, is necessary. Otherwise, you would not have known there is disaster spreading in the working class.

I didn’t hear any call at the convention for workers to rally, just as I didn’t hear any evocation of labor’s fighting history to inspire a renewed fight today. Mike Stout suggested that the convention might want to do a cultural program for delegates built around McCollester’s terrific new book, The Point of Pittsburgh, about the way in which the working classes of Pittsburgh paved what became the future not just with their sweat but their intelligence and militancy. That never happened.

People said there was no sign at the convention of what Trumka’s program might be, other than belt-tightening at the financially strapped federation.

Meanwhile, the Steel Workers were the only union that marched before the G-20, demanding jobs and proclaiming that “the unemployed, the homeless, the hungry and the poor must no longer be invisible and silent.”

JoAnn Wypijewski writes for CounterPunch, The Nation and other publications. Reprinted from counterpunch.org