Nine health care advocates were arrested the morning of Oct 28. for refusing to leave the corporate offices of heath insurance giant WellPoint, located in Lower Manhattan. The civil disobedience is part of a campaign organized by Mobilization for Health Care for All, which is demanding a single-payer health care system. Among the arrestees was Indypendent reporter Sarah Secunda (pictured), who was carried out of the offices by NYPD officers.

(Watch a video of the action here and here.) 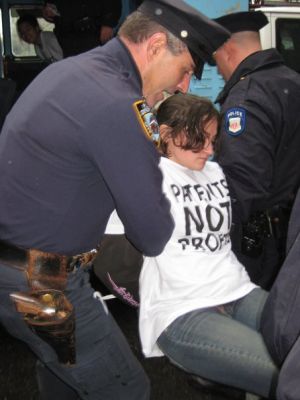 The action comes as debate intensifies in Congress over Senate Majority Leader Harry Reid’s announcement that a Senate health care bill will include a public option. Under this plan, the public option would be limited and states could choose to opt out. Grassroots activists responded this week by escalating a month-long direct action campaign targeting the nation’s largest health insurance companies, which they say are preventing real health care reform. While some have hailed the inclusion of a public option a victory for health care reform, activists around the country are mobilizing in support of a single-payer health care system that would abolish private health insurance.

Today’s national day of action targeted large insurance companies in 10 cities across the country. About 50 activists participated in the Wellpoint protest, including organizer Jean Fox, who denounced the “so-called reforms” being pushed through Congress. She said, “We know that the health care reform package is coming out of Congress soon, and we are utterly distraught and disappointed and frustrated at what’s coming out of Congress. The so-called public option has been neutered into worthlessness. We don’t even think that a public option is an answer to the health care reform problems in this country. We know that with a public option there will still be 17 to 25 million people uninsured. So single-payer – that’s all.”

115 have been arrested since the campaign started on Sept. 28th, according to the campaign. Activists say they want to raise awareness about the influence of health companies on the current legislation. They point to the roughly $500,000 that the insurance industry has given to Sen. Max Baucus, the chair of the Senate Finance Committee, and to conflicts of interest with Baucus senior aide Liz Fowler, who has ties to WellPoint.

Indy Video Collective member Aron Guy was among those arrested at the sit-in. She told The Indypendent that WellPoint is one of the major writers of the Baucus bill. Indeed, Liz Fowler worked for Baucus before becoming WellPoint Vice President of Public Policy. She returned to Baucus in February 2008.

“It’s just a revolving door,” said Guy. “WellPoint literally wrote the Baucus bill. And the Baucus bill, while not the end result, played a major role in making sure we did not get what we needed. The health care industry should not be writing our legislation. I just don’t understand why this has to be a revolutionary statement.”

Guy says that the adoption of a pubic option falls short of single-payer, or guaranteed health care for all. “It’s continually astonishing to me how liberals are so grateful for whatever crumbs get brushed off the table. This is not enough. Whatever public option comes up, Congress is not going to resolve these issues. And a public option is just going to drag out this battle for more years and more people will die. Because it is actually a battle where people are dying.”

Katie Robins, Assistant National Coordinator of Healthcare-NOW! told The Indypendent, “We know a majority of the population and doctors and nurses support a public plan – medicare for all – yet the insurance industry has been at the table, shaping this reform, to protect its interests. We need to go the root of the problem, which is the existence of private health insurance companies in our health care system.”

Robbins said activists will continue their direct action campaign until a single-payer system becomes reality. “We are hoping to send a clear message to this administration that we understand the health reform process to this point has been like political theater.” She argued that WellPoint is not creating a system that is going to improve health care outcomes and protect Americans from financial bankruptcy due to medical debt. “We need a system that works for the American people,” said Robins. “We are in the process of building a movement: a movement around the right to health care, a movement that will create the kind of health care system that this country really needs. And this tactic of civil disobedience is something that we have to look to at a time when we are fighting such injustice.”
The campaign says future actions will continue through the coming week, and for as long as support continues. Mobilization for Healthcare NOW! says 1,000 people have now volunteered to participate in direct action on its website.