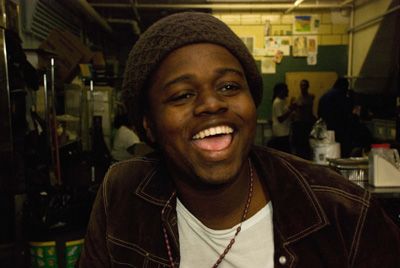 HIGHLIGHTING THE PROBLEM
Responses to “A Forgotten Youth: New York City Queer Homeless Youth Survive at the Bottom of the Barrel,” Sept. 18:

The coverage and representation of Sylvia’s Place is distorted, poorly researched and frankly, unforgivably fallacious and vitriolic.
This is a shameful embarrassment to objective journalism that aspires to veracity and a raise in consciousness of one of the country’s most vulnerable populations.
Your only redemption is to remove your name or find the courage to contact the program director or myself.
—James Vining, Sylvia’s Place Social Worker

Mr. Vining: I personally think that you would be glad to receive any PR for your program. I seriously doubt that you get allot of press if any. It would be my hope/wish that when readers peruse the article, they would see just the opposite of what you described and realize that there is a huge problem in our community nationwide. When their heart is touched and a tear comes to their eye, (as it did with myself), then hopefully they will find out more about the places mentioned and perhaps find some way to help. I in no way want to diminish your message or voice. I know having worked in nonprofits, that it is a continuous up hill battle and I thank god that they are people like you on the frontlines, helping in anyway possible.
—Gay Activist

Tears are drowning my face. I have no words in me right now.
—Michael

I think its an important issue, and the journalist did do some real on the ground investigation which is commendable. However, I agree that staff should have been interviewed at Sylvia’s Place, or residents with varied perspectives. The picture painted was quite bad and might deter potential queer youth from going there and using its services. I agree with Mr. Vining that the reporter should have given more details about the breadth of the services available. Its easy to tear on poor nonprofits and call them crappy and dysfunctional, especially next to the well funded ones. Its more difficult to give a well rounded look at these institutions.
—Amy

I used to volunteer at Sylvia’s Place. The work they do is totally needed, but their space is, frankly, dangerous. Our community needs to help these kids so they don’t have to sleep in basement rooms or on the streets.
—Former Volunteer

Mr. Vining: With all due respect, I think you are missing the point of this article. This article is to spotlight the plight of homeless LGBT, and it does so brilliantly. I just happened to pick up a copy of this paper in the lobby of the Kraine Theater, and largely due to this particular article, it is now my new favorite publication. I was literally fighting back sobs on the subway. I was moved to take action! Had this article focused on the success stories, I wouldn’t be as incited as I am. I wouldn’t think of applying to volunteer at your shelter, or another like it. I wouldn’t be thinking and planning about how to raise money for your organization. I would just be thinking, “Well done. I guess that is that. No more work to be done there.”
—Alaina 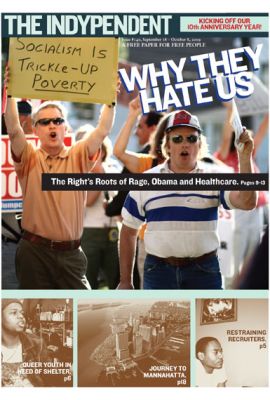 ON THE FRONTLINES
Response to “Students Armed with New Anti-Recruiter Regulations,” Sept. 18:

Good to see this is finally changing. Recruiter pushiness was really starting to be a problem in the early 1990s when I left high school. Recruiters would constantly call and some would even make personal visits to my home, despite my “There’s nothing you can do to make me even consider you” attitude. It took breaking an ankle and having a dozen screws put in it to make them stop.
—Greg _ g

It is only with private clinics opening up that Canada’s healthcare system has begun to deteriorate.

For years we have received excellent care, and …. most Canadians (87.5 percent) are still very satisfied with our system. With neoconservatives and neoliberals getting in to power because of economic fears, we are seeing a decrease in funding for hospitals. Money is going for roads and general support of corporate projects. Citizens are seeing the disastrous results of privatization. Provincially they are fighting back.
—Myna Lee Johnstone

ON THE HIGHLINE
Response to “Rainforest Rescue,” Sept. 18:

While it is stupid and tragic for New York City to be using tropical hardwoods in public constructions (in addition to the ecological arguments made here, what of the cost to the taxpayers?), it is important not to misstate the case. The market for tropical hardwood is by no means the leading factor in deforestation of the Amazon or other rainforests. The leading factor is cattle ranching, which has been responsible for nearly 40 percent of deforestation in the Amazon since the 1970s. Settlement and subsistence farming and growing soy — most of it feed for American steers — are next on the list. Some estimates put commercial logging’s contribution to deforestation as low as 3 percent. It is true that logging is often the first commercial activity on a given tract of forest. So, surely it is important to boycott the use of woods like îpe because it can be an important gateway to educate people about deforestation.
—Rowan Moore Gerety

NO HOPE IN ALBANY
Response to “Tenant’s Voice,” Sept. 18:

The Democratic-held New York State Senate, like Obama, will in the end disappoint tenants rights advocates. There is just too much real estate money at stake. Democrats get elected with the people, but it is an electoral strategy, not a governing strategy. I don’t call what goes on in the state Senate “governing.”
—Will

Hooray for the Peoples’ Voice Cafe! When someone says to you that the days of great songwriters and affordable evenings in New York City are a thing of the past, tell them that great music at affordable prices have been around for 30 years and continue to happen. After all is sung and done, it is the community of volunteers and many spirits that makes the Peoples’ Voice Cafe so special. Join us!
—Joel Landy