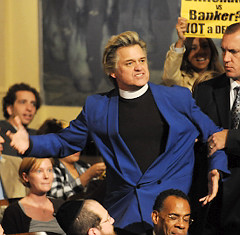 Three weeks to go to the election.  Last night I interrupted Mike Bloomberg’s opening statement in the debate.  We’re trying to poke through the $65 million TV screen that weighs down on us in Gotham City.  My prayer for bravery was posted with you earlier yesterday,  “…there is something powerful in a quiet voice when the words are whole.”

I warmed up my voice shouting in the street before they opened the El Museo del Barrio to those of us who had political connections or groundling tickets like me.  The hour before the debate, on the edge of Central Park in the twilight, Savitri and I hosted a Coney Island sideshow – a shoe-tossing with an effigy of Mike Bloomberg.  We had debated all week about throwing a shoe at him during the debate, or maybe even a light-weight not-injurious Chinese flat-heel, but lawyer friends explained assault charges and the likelihood of being shot before I could get my missile out of my hand.

I was stopped by cops as I walked from that human comedy into the stately Museo, but I had my ticket.  We decided to dress me in the full costume and dare them to kick me out.  The leader of the Campaign Finance Board, Amanda Konstam, approached with a “We’re glad to see you here Reverend!” …the dismay on her face betraying feelings of dread.  Meanwhile, as I sat in my seat glowing in my suit and hair – the corrupt political class of New York City was preening and greeting all around me.

I could not for the life of me stop low groans from rising from my throat.  This is my habitual warm-up before preaching and usually I can control it.  But it went with my twitching body language which was leaking my intent.  Amanda obviously assigned Blackwater-looking guards, they hovered nearby with the impenetrable gaze of the security personality.  When I looked at the stern crewcut no-necks my eye beheld the bacchanal in which they seemed to stand, the wall paintings in the old theater put the ridiculousness and ribaldry of all of this into perspective.

But my heart was racing.  The live TV coverage was counting down.  Bloomberg and Thompson strode out into the footlights.  The rules were recited, the journalists introduced, the opening statements requested and, “Mayor Bloomberg you go first.”  Three words into his first sentence I stood up, inhaled, and let out a preacher’s wail, the summit of years of loud practice.  My words must have been whole.  Every person on stage was frozen in an open-mouthed snapshot of surprise.

They were pulling me out a side door with Francesca and Monica, two young socialists who saw me sitting there when they came in.  We were pulled backward out the door and had one last moment of watching 600 faces watching us.  Then suddenly in an alley, we faced a perfect police noir film set.  Eight police stood there at attention, and a lieutenant did the talking, a perfect Jimmy Cagney imitation with the light just right across his craggy face.

I had worn my long-johns.  I was ready for The Tombs.  But to our surprise they didn’t arrest us.  The Cagney figure intoned that “Our tickets were now officially no longer operative, and any other tickets on our bodies must be surrendered.”  Then they walked us half-way to Madison Avenue down 104th Street, and we were free.  The 600 folks in the theater, and 600,000 media viewers, by now turned their faces back to the two men, standing erect at their podiums, two men hell-bent on turning a great city into a Wall Street-financed suburb.