On Oct. 2, a crowd of 200 people gathered outside the gates of the Stella D’oro Biscuit Co. at 237th Street and Broadway in the Bronx. Stella D’oro workers on the verge of losing their jobs mingled with supporters as a parade of speakers took to the microphone.

“How many birthday parties or family gatherings have we sat around eating Stella D’oro cookies?” Beth Borzone, a high school social studies teacher from Long Island, shouted as the 1 train rumbled overhead. “They [the workers] have brought joy to many, many people for decades. And now their jobs are threatened because of some greedy venture capitalists in Connecticut who produce nothing of value. They strip other businesses so they can sell them for a profit, benefiting who? A small few.”

The rally was part of a last-ditch campaign to save the iconic bakery, site of a bitter, 11-month strike between the 136-member unionized workforce and Brynwood Partners, the private equity firm that bought Stella D’oro in 2006.

Management demands for steep cuts in wages and benefits drove the workers to strike in August 2008. A month later the U.S. financial crisis erupted, and Stella D’oro workers emerged as symbols of working class defiance during a time of recession.

They returned to their jobs this July following a favorable ruling from the National Labor Relations Board only to watch Brynwood sell the company to snack-food giant Lance, which promptly announced it would close the factory on Oct. 9 and move production to Ohio.

Since the sale was announced, Stella D’oro workers have tried to pressure large institutional investors, including Goldman Sachs and various public-sector pension funds, to divest from Lance. On Sept. 25, 400 Stella supporters rallied outside Goldman Sachs headquarters in lower Manhattan and marched to City Hall. They demanded that the city seek a temporary restraining order to prevent the dismantling of the factory until the city recoups $425,000 in tax abatements that Brynwood has received since it bought Stella D’oro.

To date, the Stella workers have not received a reply from the mayor or his finance commissioner, David Frankel, who was named to his current post in July following stints as a managing director at Morgan Stanley and head of global operations for the AIG Trading Group.

“He [Bloomberg] keeps preaching he wants to create jobs for New York [yet] he keeps losing jobs in New York and he don’t do nothing,” said Stella D’oro shop steward Mike Filippou.

Louis Nikolaidis, an attorney for the union, said that Brynwood has $15 million in outstanding liabilities to the Stella D’oro workers: $1.5 million in severance pay, $1.5 million in back pay from the strike plus $12 million in pension and healthcare fund obligations.

“The union is going to fight to the end for everything its members are entitled to,” Nikolaidis said. “I wouldn’t put anything past [Brynwood] but their obligations are pretty clear.” 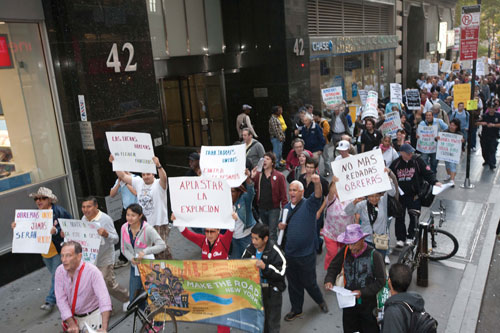