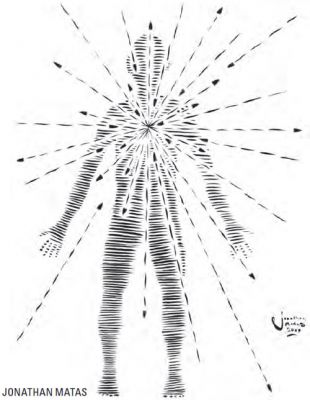 As I write this, police are still patrolling the street below me. The red and blue lights flash between the buildings. It all began in early June when a young brother walked to the edge of a block party and fired his gun, scattering people under tables and into doorways as he emptied his clip and ran. I don’t know who he was, but I know where he went.

He flew into the same blind rage that Huey Newton describes in his autobiography, Revolutionary Suicide, as the “spiritual death” of the oppressed. It’s a rage caused by the pressure of poverty, as youths are passed through schools that don’t teach, then forced to search for jobs that don’t exist and finally left stranded in the street to stare at the glamorous lives advertised around them. The rage turns inward. When that young brother shot at us, he was committing what Newton calls “reactionary suicide,” an act of self-murder, because he was targeting those who, like him, are black, poor and vulnerable.

Reviewing Revolutionary Suicide nearly 36 years after its publication is an uncanny experience. Huey Newton was, and remains, the icon of the Black Power movement. He and Bobby Seale founded the Black Panther Party in 1966. The Oakland-based organization’s ten-point program called for employment, housing, health care and education for all members of the black community, as well as the end of police brutality toward blacks. Although they began a free breakfast program, they are remembered more for carrying guns and fighting back against the white police who terrorized the black community. While the local police harassed and killed members of the party and the FBI’s Counter Intelligence Program (COINTELPRO) program pitted them against each other, it was the party’s internal power struggles that brought the Black Panthers down in 1976.

Revolutionary Suicide has been re-released in our supposedly “post-racial era.” I guess I should read Newton’s autobiography for nostalgia, testing its truth-claims against the history left in their wake. Did the revolution come? No. Many Black Panthers died, but does the depth of their sacrifice guarantee the value of their ideas? Again, no, but these questions are political, not literary.

Newton’s book is more than a partisan memoir; it’s a ceremony of words, a liturgy within the institution we know as the martyr’s discourse. It is a careful constellation of archetypal scenes.

His father was a proud black man who never let whites cross him, but he was worn down by endless work to pay endless bills. Newton saw the man he loved beaten by the world and vowed revenge.

In school, his teachers read him Little Black Sambo and called him stupid. But he fought back and got his first taste of power. He entered his senior year of high school functionally illiterate, but, like Frederick Douglass and Malcolm X, he overcame his shame by teaching himself to read using Plato’s Republic.

Like Douglass, Malcolm and even Saint Paul, Newton’s eyes opened to the senseless barbaric pain the poor endure. He fought like his father before him and the martyrs before them both. He was jailed and went through the same rite of passage that medieval Christian mystic Boethius did in his Consolation of Philosophy. He endured dark nights that ended with a spiritual discipline that made him invulnerable to pain or temptation. Newton was released, trapped and shot, tried for the murder of a policeman, imprisoned and released again. With his murder in 1989, Newton found eternal life in the memory of the people.

Revolutionary Suicide is quick, fluid and elegant. Newton made his life into a myth in order to transform the reader into a revolutionary. The martyr’s discourse transforms. It shifts the referential duties of words; it unlocks blindness, opens the world within the world. The only dishonesty in Revolutionary Suicide is the dogma that political activism leads to ultimate freedom. All freedom is conditional. You can be free for and with the people, which is noble enough, but the cost is that you can’t be free to be yourself. Newton warns that you can’t be yourself until you confront the society that created you.

Yet another way to review this book is to look at him not from our eyes but to look at us through his. If Huey were here, he’d call out to the brother who fired his gun at the party, chase him down and say patiently and without fear, “You can re-create this world,” and touch the gun holstered on his hip, then his head and say, “I did. You can. We are.”