Can Congress limit the amount individuals, including corporations, may spend to influence elections — or would that violate the First Amendment? In 1976, the Supreme Court ruled in Buckley v. Valeo that while individual campaign contributions can be limited, a candidate or campaign’s expenditures cannot be limited without running afoul of the Constitution.

A majority of the Court felt then, and still feels, that capping a candidate’s expenditures is “a drag on the First Amendment,” and subjects that candidate to “discriminatory fundraising limitations.”

Last year, in Davis v. FEC, a 5-4 majority struck down the “Millionaire’s Amendment” in the 2002 McCain-Feingold campaign finance law. The amendment allowed candidates for the U.S. House of Representatives to triple individual fundraising limits when facing candidates who spent more than $350,000 of their own money on a race.

Writing for the majority, Justice Samuel Alito argued that despite Congress’s intention, there is no “legitimate government objective” in reducing “the natural advantage that wealthy individuals possess in campaigns for federal office.”

Justice John Paul Stevens countered in his dissent: “There is no good reason to allow disparities in wealth to be translated into disparities in political power.”

The ruling in Davis v. FEC is seen as providing an opening to sweep away limits on corporate campaign funding.

In a case now pending before the Supreme Court, Citizens United, a conservative “public interest” law firm, is challenging the right of the Federal Elections Commission (FEC ) to regulate its distribution of Hillary: The Movie. Released during last year’s presidential primaries, the movie was designed to warn voters of Clinton’s “liberal plot for America,” should she become the Democratic presidential nominee.

Under McCain-Feingold, upheld by the Court in 2003, funding sources must be disclosed for electioneering materials aired on television within 60 days of an election. Citing the legal doctrine of “corporate personhood,” Citizens United claims the FEC violated its right to unfettered free speech.

The conservative majority, led by Chief Justice John Roberts, appears ready to use this case as the vehicle for allowing free-wheeling corporate spending. The Supreme Court ordered re-argument in September after the case had already been heard in March, and it specifically invited the parties to address whether precedents upholding limits on contributions should be overturned.

In 2003, Justices Anthony Kennedy, Antonio Scalia and Clarence Thomas voted to overturn McCain-Feingold. Now they are joined by Alito and Roberts, who have spoken against campaign spending limits.

This overreaching by the conservative majority was not lost on Justice Ruth Bader-Ginsburg, who asked Citizens United’s lawyers whether corporations, even foreign-owned, should have the right to unlimited campaign spending. “A corporation, after all, is not endowed by its creator with unalienable rights,” she wrote.

The doctrine that corporations are “persons” for purposes of Fourteenth Amendment rights to due process has been accepted uncritically by the Court for more than a century, since it first appeared in a footnote in the 1886 case, Santa Clara County v. Southern Pacific Railroad Company.

But 30 years ago there was a persuasive critique. In a 1978 decision, First Nat’l Bank of Boston v. Bellotti, the justices split 5 to 4 in striking down a Massachusetts law that prohibited corporations from spending to influence the outcome of referenda.

At issue was a proposal to enact a progressive income tax. In accordance with precedents that “corporations possess certain rights of speech and expression under the First Amendment,” the majority ruled the state law unconstitutional.

The dissenters, Justices Thurgood Marshall, William Brennan and Byron White, were well aware of the implications of this ruling: “The governmental interest in regulation of corporate political communications [is to prevent] institutions which have been permitted to amass wealth as a result of special advantages extended by the State from using that wealth to acquire an unfair advantage in the political process. The State need not permit its own creation to consume it.”

The Court may not announce a decision until the end of its term in May. A decision that favors corporations over working Janes and Joes could spark greater interest in a constitutional amendment proposed by Reclaim Democracy, a grassroots group committed to challenging corporate power, which states, “The U.S. Constitution protects only the rights of living human beings,” and “Corporations and other institutions granted the privilege to exist shall be subordinate to any and all laws enacted by citizens and their elected governments.” 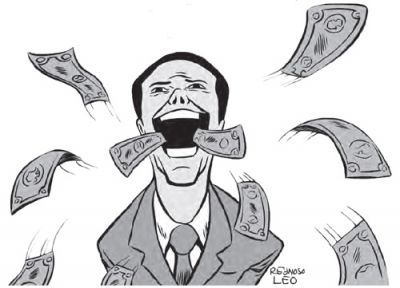