Franklin Elijah White is a meteorologist, as were his father and grandfather and great-grandfather before him. He used to be a TV weatherman — tagline, “You can trust me” — until the day he tried to tell Channel 7 viewers the frightening truth: The weather is out to get us.

White (Richard Lovejoy) understood the depth of Nature’s malice only when he read his late father’s manuscript, The Dark Heart of Meteorology. Now he crisscrosses the country delivering lectures about it. Humankind may be destroying the Earth, he says, but “the Earth started it.” In other words, “the weather will kill us all. So let’s do it ourselves first.” 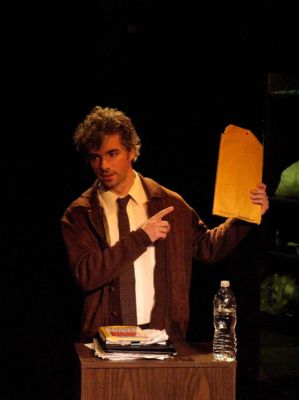 The lectures, along with White’s videoblog on the same theme, make up the substance of this more-or-less one-character play by Stephen Aubrey, on stage at the Under St. Mark’s Theater in the East Village through Oct. 14.

The ocean, White says, is a hurtling tsunami with ravenous sharks on its crests; the sun is “a bow that shoots arrows of cancer at you.” Interwoven with accounts of mass devastation — floods, tornadoes, typhoons, and deadliest of all, fogs — are tales of smaller and stranger natural phenomena, like a bolt of lightning that fused the genitals of a pair of teenagers making love on a mountaintop. (On second thought, he muses, “[T]his story might not be true.”)

With each lecture, White’s vision grows bleaker. Lovejoy convinces us that White is slowly falling apart as he relates, between impersonal tales of fire and flood, the history of his own, weather-cursed family. He describes the lightning that struck his mother and father during their wedding, the snowstorm in which his mother disappeared (because she hadn’t heard White’s father’s warning), and the flood that drowned his father. No wonder he’s afraid of the weather.

Yet now he’s confronted by hope. His lover is pregnant, and he has to decide whether to run away — because he’s “not strong enough for two” — or to make a home with her and their child, in which to “weather the storm” he sees on the horizon. (Meteorology is actually a one-and-ahalf- character play; the voice of Sarah, White’s lover — played by Audrey Crabtree — coming to us on his message machine.)

The Dark Heart of Meteorology steers resolutely away from politics. Even a passing reference to Hurricane Katrina avoids mention of the human contribution to the Katrina’s disastrous impact. This is a play about life’s fundamental unpredictability and our existential response to it, which in other hands have often been heavy, not to say grim, subjects.

Yet Meteorology is neither heavy nor grim. On the contrary, it is, in turn, hilarious, charming, and, ultimately, tender and touching. As Franklin used to say when he had a job, you can trust me.
-JUDITH MAHONEY PASTERNAK