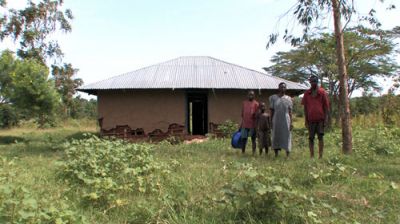 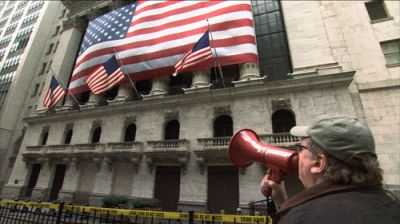 The End of Poverty?
Directed By Philippe Diaz
Cinema Libre, 2009

A year after Lehman Brothers declared bankruptcy, a slate of new documentaries is attempting to shed light on the ongoing economic crisis. The most high profile of these films, rather unfortunately, is Michael Moore’s Capitalism: A Love Story, which simultaneously recalls his first film, Roger & Me, while striving to condemn an economic system in which Moore is fully entrenched. Using the subprime mortgage crisis as a springboard for his pat explanation that capitalism is the great evil, Moore makes the same movie he always makes, but to more diminishing returns than his last film, Sicko.

Moore’s hollow stunts, which include his self-parodying attempt to see the CEO of General Motors again, alternate with half-paranoid, half-brilliant insights, such as when he points out that the majority of those overseeing the government bailout have deep ties to the surviving financial firms. As always, the film is most engaging when Moore is off-screen, letting scenes or interviews play out without him pointlessly restating their intent: In one sequence, a group of neighbors defends one family’s home from foreclosure by staging a sit-in. Moore undercuts even his own minor filmmaking skills with clichéd, Soviet-style montage, cheap kung-fu-style dubbing, and blatant Kuleshov ripoffs. The final sequence of the film — in which Moore vaguely ruminates on alternatives to capitalism while wrapping Wall Street in crime tape — seems rushed and poorly thought out and shows the lack of discipline that keeps Moore from becoming the major filmmaker he clearly is — in his head.

If Moore’s film is the angsty, nerdy teen version of this story, Leslie and Andrew Cockburn’s American Casino is the calm, level-headed older sibling. Featuring interviews with several key players as well as assorted intellectuals and everyday people affected by the mortgage crisis, the film strikes the right balance between indignation and hope.

One consistently inspired, if overused, approach is the introduction of an upstanding community member, such as a schoolteacher or a minister, who discusses the impact of the crisis on their community before revealing that they, too, are struggling with foreclosure and eviction. This technique of featuring hard-working, bankrupt people who explain how the crisis is affecting their communities offers an ideal counterpoint to the callow, narrow-minded thinking of the financial leaders who led us into this mess in the first place.

Lacking Moore’s flair for showmanship, the Cockburns are a tad too restrained, especially when their research and insights make the viewer’s blood boil. Still, they know a resonant metaphorical image when they see it, for example, closing the film with a sequence featuring the trash-filled pools of various foreclosed homes — the perfect backyard laboratories for breeding disease.

Both of these films use the mortgage crisis to talk about larger socioeconomic issues, but beyond touching on recent events, neither has the ambition or far-reaching sense of history that can be found in The End of Poverty?, a new film by Philippe Diaz. Ignoring the recent economic meltdown nearly altogether, the film features interviews with a wide array of people, from Nobel Prize winners to Kenyan mineworkers, and places the origins of poverty in the historical context of colonization. Tracing the practice back to 1492 and specifically calling out Dutch and English settlers, Diaz addresses how the displacement of indigenous people from their own land, along with the subsequent enslavement of African laborers, created a culture of poverty that has been reinforced through the free-market policies of the modern era.

Providing an overwhelming amount of information through a mix of statistics and personal stories, Diaz’s film never lacks ambition, but the scope of its expansive view eventually bogs it down. With seemingly hundreds of interviews, the film would be more successful as a series of individual episodes focused more concretely on specific issues. That said, it should be required viewing for anyone interested in the history of poverty. Although it does not mention the subprime mortgage crisis by name, it could hardly be more timely.

Join Cinema Libre Studios and The Indypendent for special event with director Philippe Diaz and Indypendent editor Arun Gupta. A 25-minute sneak peak of the film will be screened followed by a discussion. Free tickets to the film will be given to the first 25 people who arrive to the event. Bluestockings Bookstore & Cafe, 172 Allen Street, Manhattan. Nov. 10, 7pm.