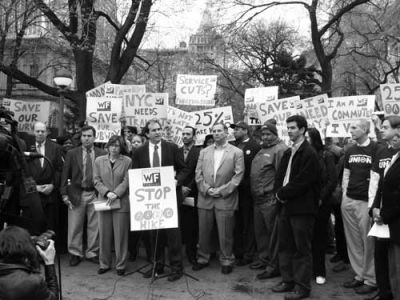 Founded in 1998 as a coalition of labor and community groups, the Working Families Party has combined old-fashioned, grassroots organizing and strategic alliances with the Democrats to become an increasingly powerful force for progressive politics in New York City. The Indypendent recently spoke with the party’s Executive Director, Dan Cantor, about the WFP’s recent victories in the run-off elections for city comptroller and public advocate, mobilizing voters and taking on Bloomberg in November.

ELIZABETH HENDERSON: Why has the WFP decided to take on Bloomberg this year when many Democrats have given up the hope of defeating him?

DAN CANTOR: Eight years is enough, and we think it’s time to have someone at City Hall whose instinct will be to ask a different question than the mayor asks. We need to be asking: How does this affect average middle class and working class people? Bloomberg has a lot of resources, but at some point that becomes sort of irrelevant and I think that what happened with term limits is still out there. There’s also the economic crisis. This is a serious, slow motion crisis that we really need to address as a society, and so we need leaders who will face that crisis squarely and work with community organizations to solve it.

EH: Why is it important to have a third party that has a strong base in labor unions?

DC: We see our role as speaking truth to power and saying things that the major parties either can’t or won’t say. We didn’t invent the idea that it would be good if labor and its allies had a political party of their own. It’s a very old idea and it’s very common in countries that are more advanced than the United States, such as in Latin America and Europe. In the United States, most of the action has typically been just inside the Democratic Party. In New York, we have the Working Families Party, which, because of the unusual New York voting rules, can be both independent but also relevant to the major parties. We’re a young party, but we’ve come a pretty decent way in a short amount of time.

EH: What will be WFP’s main policy goals here in NYC over the next four years? How will you translate your electoral successes into tangible victories for working people, especially if Mayor Bloomberg wins a third term?

DC: The first issue that we’re pushing right away is paid sick days. We also think the whole issue of responsible development, or equitable development, is a crucial one. That gets at a whole set of issues around housing and jobs and neighborhoods and what makes New York so great. We need development policies that create and maintain good jobs and affordable housing.

EH: Many radicals have described the Democratic Party as the “graveyard of social movements.” How do you get the Democrats to work for the people who vote them into office instead of their corporate funders?

DC: You have to have power, you have to organize and you have to be incredibly, tremendously diligent. You have to stay on them and provide support when they do the right thing. We hope that by providing support and getting people into office, we’ll then have credibility when we say we expect them to actually take on the peoples’ business once they’re in office. And also, we’re not naive. There are lots of counter-veiling forces, and we don’t expect elected officials to be perfect. Perfection is not a credible goal. If we organize well we will win much more than we lose.

EH: How would you respond to critics who say that the WFP is compromised by its relationship to the Democratic Party?

DC: I don’t think that’s a fair critique. We don’t expect Democrats to be perfect — we just want them to be better. It’s not enough to publish manifestos. You actually have to be willing to knock on doors and make phone calls and talk to people who don’t agree with you. And that’s how you build power with and for working people, and that’s what we hope to accomplish.

For more information and to get involved, visit workingfamiliesparty.org.