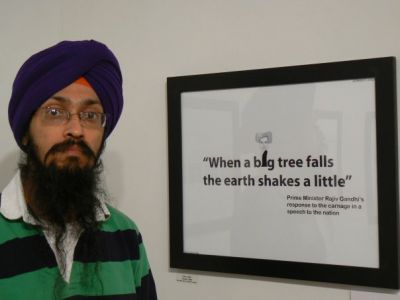 In commemoration of the 25th anniversary of the the 1984 anti-Sikh pogroms in Northern India, Sikh-American cartoonist Vishavjit Singh has created an exhibit titled, “When A Big Tree Falls.” The exhibit consists of 23 cartoons, including 19 that have never before been displayed. Singh is the founder of the popular political cartoon website www.sikhtoons.com.

It is commonly known that the October 1984 assassination of Prime Minster Indira Gandhi came at the hands of her own Sikh bodyguards. The exhibition deals with the less well known aftermath. Gandhi’s assassination sparked four days of ethnic cleansing, with Sikhs and their identifiable turbans and long hair becoming easy targets for retaliation. That members of my family survived to tell the tale is likely the only reason I am aware this ever took place. Amnesty International calls the episode, “A national disgrace,” referring to the Indian police who orchestrated much of the killings and authorities who did nothing to stop them.

At least 3,000 were killed in Delhi alone, with countless of thousands more injured and raped. The assassination of the Prime Minister came admist alleged human rights abuses and violence between separatist Sikh movements and the Indian Army. In June of that year, “Operation Bluestar”, was launched on the Golden Temple, Sikhism most important religious site . Thousands were slaughtered, including many civilians .

Its personal for Singh too. His family had made Delhi their home, and were saved only by a combination of courageous intervention on the part of Hindu neighbors and his family living in a government-owned housing complex. Through drawings and text, his cartoons weave a powerful narrative of the massacre, a rigged Indian justice system and a silent and complicit Indian media. Not even the appointment of the first Sikh Prime Minster is enough to turn the wheels of justice. As the exhibit caricatures, after offering an official apology to the Sikh community, the current Prime Minister Manmohan Singh told a Sikh audience its time for the Sikh community to, “Move on.”

The artist titled the exhibit, “When A Big Tree Falls,” after the first half of quote spoken by Rajiv Gandhi, in the immediate aftermath of the massacre. Rajiv was Indira’s son and was sworn in as Prime Minister after his mother’s death. The quote continues, “The Earth shakes a little.” And despite the killings, Rajiv’s Congress Party won a record-setting landslide victory in elections held in the same year.

So far, the Indian government has launched ten investigations, resulting in only 25 convictions. Human Rights Watch notes that, “No senior government officials or politicians have been prosecuted despite evidence of their roles in the atrocities.” The events and aftermath are inseparable from my identity. However for most Americans, and perhaps many in the Sikh Diaspora, the only death of note in 1984 in India was that of Indira Gandhi’s. Singh offers an insightful and creative way to remember those who were not as fortunate to survive.