For South Bronx kids used to seeing chicken fried in a cardboard bucket, spending recess with 15 live hens is an unusual lesson. The chickens are part of St. Augustine School’s growing number of “green” projects, with plans for a greenhouse and a self-sustaining tilapia pond in the works.

“They eat the noodles like people do!” exclaimed Brianna Manning, 7, as the hens slurped up a giant pile of spaghetti and meatballs, canned peas and fruit gleefully dumped into their coop by Brianna’s first-grade class.

St. Augustine sits in the middle of Morrisania, part of the poorest Congressional district in the country. Ninety-eight percent of the school’s kindergarten through eighth grade students qualify for free lunch, and access to fresh produce is extremely limited.

But with a funding shortfall of $1.5 million, the school, and its environmental programs, are in serious jeopardy. 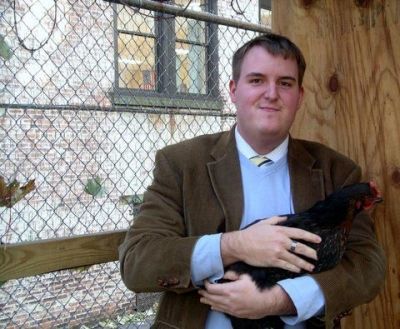 The programs started piecemeal — first came the community garden in 2004, where kids and neighbors grew rhubarb, redskinned potatoes, peas and collard greens. Then the students started harvesting honey from beehives kept by a local gardener.

“Education is more than reading, writing and arithmetic. It’s understanding that we are stewards of this earth,” said Principal Kathryn Trapp.

When the chickens arrived at St. Augustine last September, each homeroom named a chicken. Now Ruby, Monica, Mary and Dymphna — named for the patron saint of mental and nervous disorders — spend their time eating leftovers from the school cafeteria and the rectory.

“The goal is to make us as self-sustainable as possible and to give our kids a sense of ownership over what they produce,” said Michael Brady, the school’s fundraising director. Some students call him “Mr. Brady.” To others, he’s “the chicken guy.”

While students study the connection between the weather and egg production and learn about poultry life cycles, the hens provide more than a science class.

Kids with disciplinary or emotional problems receive “chicken therapy.” According to Brady, taking responsibility for the birds has led some students to improve not just their behavior but their grades, too.

“Ken was a handful,” Brady said, recalling a former student. The seventh-grader would talk back, even threatening his grandmother. Then Brady put Ken in charge of feeding the chickens three times a day and his grades jumped from Fs to Cs and his behavior improved.

Students are also able to learn about healthy eating habits, which are rare in a neighborhood where 27 percent of adults are obese and 16 percent suffer from diabetes.

“Sometimes the eggs are warm when they just come out of the chicken,” said seventh-grader Cynthia Galdamez. She often wraps one in a tissue and takes it home, two blocks down the street. Cynthia’s mom, who was excited about the chicken program because it reminded her of growing up in El Salvador, said the eggs taste better than any she could buy at a supermarket.

Everything is used. Neighbors collect chicken waste to spread as fertilizer on their gardens. Needy families take home the bulk of the eggs. With the additional protein and fresh garden vegetables, Brady said some kids no longer relied on the St. Augustine food pantry.

“We’re not a rich school,” Brady said. “It’s nice to be able to teach kids who are impoverished that we can do better.”

Just Food, a New York City nonprofit that seeks to increase access to fresh healthy food, gave St. Augustine a grant to buy the chickens last fall. Not only does the program provide students with the opportunity to learn more about where their food comes from, but it also benefits the entire community.

But with a sizeable funding gap, declining donations and dwindling enrollment—the number of students attending the school has dropped from 242 students in 2007 to 192 this year — the leadership at St. Augustine is worried that the Archdiocese of New York may shutter the school due to a lack of funds.

No matter how badly the kids and teachers at St. Augustine want to save the environment, preserving their own school is a more immediate challenge.

“It’s always in question, especially in these times,” Trapp said. ”It’s looming over your shoulder.”