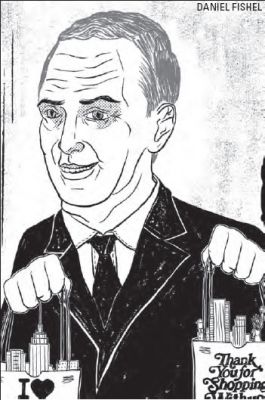 After ramming legislation through the City Council and then spending more than $100 million to get a third term, the Mayor relied on a strategist who learned his trade working for the vain and venal deposed Illinois governor and a collapsed Wall Street titan considered arrogant even by the erstwhile Masters of the Universe.

Bloomberg built a machine that combined Chicago-style political muscle with Wall Street billions. Labor unions had a choice — they could get on the bandwagon and be in a good position to get raises, or they could fight a quixotic campaign and be out in the cold for the next four years. Nonprofit groups could get on and collect large donations — or wonder about their funding in the next city budget.

Meanwhile, Bloomberg blanketed the city with propaganda. He would have spent less money if he’d simply bought an iPod nano for each of the 557,000 people who voted for him. His commercials on Yankee postseason games matched those for cars, beer and erectile-dysfunction medications. He bought full back-page ads in scores of neighborhood and ethnic publications for weeks on end — and most of them endorsed him.

The mayor’s supporters made much of his supposed “incorruptibility.” Bloomberg was so rich, they believed, that he didn’t have to hustle for special interests, cutting petty side deals that barnacled the city government.

Instead, Bloomberg would run the city like a corporation, like a CEO. That carried the aura of “competence” — but it ignored the reality of corporate governance. Corporations are run for the profit of those at the top. Bloomberg has certainly done that well. In his eight years as mayor, his personal fortune almost quadrupled, from $4.5 billion to $17 billion.

Only the little people take bribes. The real players pay them.

Bloomberg’s slogan “Progress, Not Politics” had an Orwellian subtext. In his worldview, “progress” is any change that increases real-estate values, like a luxury condo with high-tech and “green” amenities. “Politics” is a slur to dismiss anyone who disagrees with him. In the corporate world, people who talk back to the CEO usually get five minutes to clean out their desk before security escorts them off the premises.

Meanwhile, under Bloomberg’s tenure, the city has lost a net of 190,000 apartments affordable to people who make less than $37,000 a year — 42 percent of New Yorkers, according to the Furman Center for Real Estate and Urban Policy at New York University.

The mayor has often touted his plans to “create or preserve” 165,000 units of affordable housing, but his definition of “affordable” is merely “below market rate.” The Bloomberg administration defines “low income” as below about $40,000 for a single person and $57,000 for a family of four. One-fifth of the housing slated to be built is designated for households with incomes between roughly $85,000 and $192,000 for a family of four. They call this “middle-income.”

As of October, the city had built about 35,000 units and preserved 59,000. But Metropolitan Council on Housing organizer Mario Mazzoni says most of the apartments Bloomberg is taking credit for preserving “were already affordable housing, already receiving subsidy. The landlords extorted the city for more money, threatening to turn them into market-rate housing.”

For example, when the owner of Independence Plaza North in Tribeca took the complex out of the Mitchell-Lama middle income program, the Bloomberg administration brokered a deal that let vacant apartments go to market rate and the poorest tenants receive federal Section 8 subsidies. It quietly let the landlord “retroactively” repay tax benefits that required all apartments to be rent-stabilized.

The mayor’s policies have undercut any pretense of preserving affordable housing. He donated millions of dollars to the Albany Republicans who have prevented strengthening the state’s rent regulations. In 2006, he fired the one Rent Guidelines Board public member who had voted for a rent freeze instead of rubber-stamping another increase.

Some of Bloomberg’s statements on housing issues reached Marie Antoinette levels of callousness. At a Working Families Party forum in July, he publicly declared that the 25,000 people evicted every year didn’t know how to “manage their budgets,” and that the reason homelessness had reached record levels was because his administration had made city shelters “more attractive.”

Democratic candidate Bill Thompson came far closer than people expected, taking 46 percent of the vote to Bloomberg’s 50.6 percent, but he failed to ignite popular anger about the mayor’s policies. Talk to anyone on the street or subway, and you’ll likely find them irate about record housing costs. The subway fare has gone up four times under Bloomberg, but it still seems as if half the lines are out of service on weekends. Unemployment in the city has passed 10 percent, the highest since 1993. Hundreds of small businesses are folding, replaced by upscale bars or empty storefronts.

Thompson faced both the classic modern-Democrat dilemma and the racial stereotyping of New York black politicians. Democrats need working-class votes to win elections, but if they campaign on working-class issues, they alienate their funders. Black politicians who speak out forcefully get denounced as “militant,” but if they’re more mild-mannered, like Thompson, they evoke the archetype of David Dinkins, “the nice guy who dithered while crack dealers terrorized the city.” (Dinkins took office in 1990, the year crack-trade wars and an irate ex-boyfriend torching a Bronx social club pushed the city’s homicide totals to a record 2,245. The 10,000 new police officers he hired didn’t hit the streets until after he’d been defeated by Rudolph Giuliani. Giuliani would then claim that his authoritarian, racial-profiling police tactics were what had reduced crime.)

Yet if Thompson had spoken out more forcefully, would anyone have been listening? The city’s three daily newspapers, owned by neocon real-estate speculator Mort Zuckerman, rightwing billionaire Rupert Murdoch, and the indelibly establishmentarian Sulzberger family, all treated Bloomberg’s re-election as inevitable. In the tabloids, coverage of the mayoral race was buried well below Sarah Jessica Parker eating a cupcake and Yankee fans getting the team’s logo shaved into their hair.

Bloomberg was vulnerable, but he was able to get away with it by projecting an aura of invincibility. President Obama wouldn’t even endorse Thompson by name. City Council Speaker Christine Quinn enabled Bloomberg’s third term law and then refused to back Thompson until the last minute. Several key labor unions sat on their hands. They may have positioned their members for small raises, but they helped impose four more years of plutocracy on the working people of the city.

For more information, see “The Stakes Are High” by Juan Gonzalez and “Council Members to Keep an Eye on” by John Tarleton, both in this issue of The Indypendent.