The Stella D’oro Biscuit Co. in the Bronx closed Oct. 8, putting 136 unionized employees out of work. After a strike that lasted nearly a year and an extensive legal battle, the factory has been sold and much of the plant’s equipment has been dismantled and shipped to a non-union shop in Ohio.

At an Oct. 29 rally and press conference outside the factory gates, the workers revealed that CITGO, the U.S.-based subsidiary of Venezuela’s state oil company, had expressed interest in buying the abandoned factory but had been rebuffed by Brynwood Partners, a Connecticut-based private equity firm that sold Stella D’oro to snack food giant Lance, Inc. Brynwood completed the sale after its demands for draconian cuts in wages and benefits provoked a bitter 11-month strike by members of Bakery Workers Local 50.

“CITGO tried to call them, email them, and they [Brynwood] refused to respond,” said Stella D’oro shop steward Mike Filippou.

A CITGO spokesperson confirmed to The Indypendent that the company “did express an interest in purchasing the plant but did not receive a response.”

CITGO’s involvement began after several of the workers and their supporters spoke with Hugo Chávez during a Sept. 23 reception at the Permanent Mission of the Bolivarian Republic of Venezuela to the U.N. After Chávez asked how he could help, one of the workers urged him to buy the company.

Chávez mentioned the “cracker factory” on Larry King Live later that night and spoke of buying it during a speech he gave the following day at the United Nations. A week later, CITGO executive Andreas Rangel flew in from Houston and held a pair of meetings with Stella D’oro workers and supporters.

René Rojas, a Bronx community activist who was present at the meetings, said CITGO was interested in buying or renting the bakery at 237th Street and Broadway. Rojas said CITGO wanted to reorganize it as a worker-run cooperative and resume production under another name, since Brynwood had already agreed to sell the Stella D’oro brand to Lance. There were also informal discussions about how made-in-the-Bronx cookies could be sold at CITGO’s 7,000 gas stations, located in the Northeast, Mid-Atlantic and South.

“They were interested in showcasing a form of production which was beneficial to the whole community and which privileged social results rather than just economic objectives,” Rojas said. CITGO has cited similar social concerns as the reason for its past initiatives in the Bronx: Since 2005, the company has provided discounted heating oil for lowincome apartment dwellers in the borough, along with funding support for a number of community-based nonprofits. CITGO’s parent company has financed many worker cooperatives in Venezuela, one of several Latin American countries where the number of coops has been on the rise. (See “Who Needs a Boss” box.)

The Stella workers and their supporters said they had also reached out to the Bloomberg administration to seek help in brokering a deal with Brynwood, but received no assistance.

“How are you the mayor of a city and let this happen on your watch?” asked Judy Sheridan-Gonzalez, a Bronx-based union activist. “He [Bloomberg] didn’t even try to find a solution. We did. It’s such a travesty.”

While prospects for a cookie co-op in the Bronx have stalled, the factory is being gutted. Filippou said Stella D’oro would be finished shipping equipment to Ohio by the end of November. He predicted that giant 10-by-100- foot ovens, which can’t be hauled away in an 18-wheeler, will be sold for scrap.

Filippou said that Local 50 is fighting to make sure the Stella D’oro workers receive full payment of an estimated $15 million they are owed, including $1.5 million in severance pay, another $1.5 million in back pay from the strike and $12 million in pension and healthcare fund liabilities.

The Stella D’oro strike ended in July after a union victory at the National Labor Relations Board forced the company to take back the strikers under the terms of their old contract, along with back pay.

Filippou said nine former Stella D’oro workers have started new jobs at bakeries in Queens, Long Island and New Jersey that are organized by Local 50. He expects 20 to 30 percent of the workers to eventually land unionized bakery positions in the New York City area.

But while the workers may not have won this fight, neither did Brynwood. According to Local 50 lawyer Louis Nikolaidis, Brynwood bought Stella D’oro for $17 million in 2006 and hoped to flip it for three times as much after busting the union. Instead, he estimates the private equity firm will lose $10 million to $20 million on the deal.

This article is adapted from an earlier version that appeared in Clarion, the newspaper of the Professional Staff Congress (psc-cuny.org). 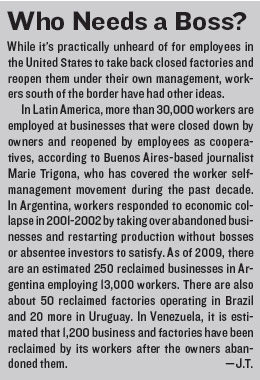