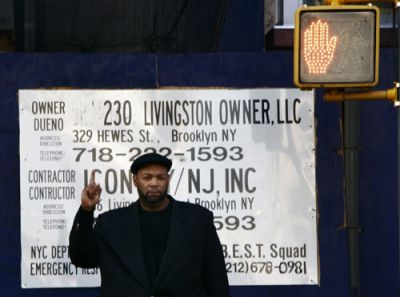 The white, concrete 30-story luxury condominium building in Fort Greene, Brooklyn, towers over the neighborhood. The structure’s glass windows shine, though only a few units have lights on. Known as the Forte Condos, its construction began in the waning days of the real-estate boom, and it sits as a relic of a lost era.

The building on Ashland and Fulton streets has run into trouble. At least 60 percent of its units are vacant, even after apartment prices were slashed by hundreds of thousands of dollars. Majority equity holder Goldman Sachs and developer Clarett Group have relinquished control of the building to the bank, Eurohypo AG.

But Forte Condos is not an anomaly. It is one of some 600 stalled or largely empty condominiums located throughout the city, according to preliminary data released by Right to the City New York (RTTC NY), a coalition of local grassroots organizations pushing the city to convert unused luxury units or stalled construction sites into low-income housing.

A full report, with detailed information on these buildings — their foreclosure status, the price of units on the market and more — is scheduled to be released later this year by RTTC NY and the Urban Justice Center’s Community Development Project.

“These buildings stand as symbols of the greed of Wall Street,” said City Councilmember Letitia James (D-Brooklyn), who is affiliated with the Working Families Party and represents Clinton Hill and Fort Greene. James is teaming up with RTTC NY, which includes groups such as Families United for Racial and Economic Equality (FUREE), Picture the Homeless and Mothers on the Move, to press their demands for affordable housing.

“Everywhere you look, throughout the five boroughs in poor low-income communities, there was a ton of luxury condos being built, and the luxury [buildings were] replacing low-income housing,” said John Tyus, a member of the Brooklyn-based activist group FUREE .

Housing activists say that the need for affordable housing is greater than ever — almost 200,000 units of low-income rental units in New York City have been lost over the past eight years. The glut of luxury development — a result of gentrification, the speculative real-estate market and rezoning — should be given to people in dire need of housing, activists say.  More than 125,000 people remain on a waiting list for Section 8 vouchers in New York City.

“Our government bailed out the banks and neglected its people, and those very same banks are financing many of these condominium projects,” said Rob Robinson, a board member and housing organizer with Picture the Homeless. “It’s time to make data like this public to demand that this housing go towards low-income and poor people.”

“Municipalities prefer to have upper-income housing because that improves their tax base,” said David Harvey, a professor at the Graduate Center of the City University of New York. Harvey is one of several academics who works with RTTC.

“There’s not a natural market for it, in the sense that people [don’t] have the incomes to go live in those high-income condominiums, [so] the tendency is to bridge that gap between what people can afford and what they need to get into housing by greater indebtedness,” Harvey said. “So, we’ve been seeing an incredible increase in indebtedness, in general, over the last 20 or 30 years of neoliberalism.”

RTTC NY is part of the nationwide Right to the City alliance, which is active in nine cities in the United States and works to fight gentrification and displacement in urban areas.

The empty or stalled projects have caught the eye of State Assemblymember Hakeem Jeffries (D-Brooklyn), who is also working with RTTC NY. Jeffries, who conducted his own survey and found 66 stalled, vacant or partially occupied luxury buildings in his district, has launched what he is calling “Project Reclaim,” an initiative to convert luxury housing into affordable housing. He has introduced legislation in Albany which would give the New York State Mortgage Insurance Fund the power to refinance that conversion. The bill is currently in the Assembly’s Housing Committee and cosponsored by 22 other Assembly members.

“The luxury condominium steamroller has threatened to overrun low-income and working families all throughout New York City,” Jeffries said at an Oct. 27 rally kicking off RTTC NY’s condo-conversion campaign.

But while the grassroots organizations that make up the RTTC coalition applaud Jeffries’ efforts, they say a separate city proposal to combat troubled condominiums is only a first step, and are demanding changes so that the proposal would help poor people.

In a July 8 press release, Bloomberg said that HARP would transform “what would have been market-rate buildings into affordable housing for working class New Yorkers.” However, housing activists say HARP’s income parameters are set too high, that the program needs more money and that their rent restrictions only apply for 30 years. In the program, a family of four must make less than $126,720 a year to qualify, and a single renter must make less than $68,810 to qualify. It remains unclear whether developers will bite or just wait out the bad real estate market.

The official New York City poverty line, which is slightly higher than the federal government’s poverty line, is $26,138 for a family of four and $12,114 for a single person.

Councilmember James says she is currently in discussion with HPD and Quinn about lowering the income targets to reflect a given area’s median income. In Bushwick, which has 108 troubled luxury buildings, according to RTTC NY, the median household income is just above $30,000. HPD Press Secretary Eric Bederman wrote in an email that HPD conducted a meeting with RTTC NY last month, and that they “are aware of their concerns. We look forward to receiving their full report and reviewing their findings when it is complete.”

“The fight right now is to make HARP a better program,” said Mario Mazzoni, an organizer with the tenants’ rights group Metropolitan Council on Housing. He believes that there are other ways to create truly affordable housing from the luxury housing stock, such as having the city acquire troubled sites and turning them over to a nonprofit or tenant group.

“People are appalled because these properties are being built in their backyard and they’re being displaced,” said Robinson of Picture the Homeless. “They’re being sent to other places around the city, but quite frankly, it’s hard to settle anywhere in the city, because the same process is happening in all of the boroughs.”

Learn more about the Right to the City alliance in New York by viewing this video put together by the IndyVideo team.