The Lesser Seductions of History
By August Schulenberg
Flux Theatre Ensemble
At the Cherry Pit, 155 Bank Street
Manhattan, until Nov. 22

“This is a play about belonging to something … what it gives you, what it takes away,” says History. It’s her lesser — and greater — seductions that are the subject of August Schulenberg’s beautiful and compelling new play.

It begins in 1960, as 10 young people go about their business across the United States, unaware that the moment in time called the sixties is about to change everything. They’re white and Black, male and female, middle- and working-class: Isaac, the poet (Jake Alexander), and Marie (Tiffany Clement), his wife, supporting him as a waitress; Isaac’s cousin Lee (Isaiah Tanenbaum), a painter; George (Michael Davis), a jazz musician, and his sister Martha (Raushanah Simmons), an office worker; Barry (Matthew Archambault), a baseball player, and his brother Bobby (Jason Paradine), a medical student; Tegan (Kelly O’Donnell), an activist-journalist; and Lizzie (Christina Schipp), a writer, and her sister Anisa (Ingrid Nordstrom), a scientist. Most appear to be heterosexual, although that will change for some. Most are more interested in their personal lives than in the fate of the world, although that, too, will change. 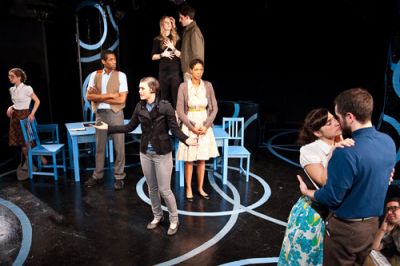 A chorus figure who may be the Goddess of History (Candice Holder) leads them through each year of the Sixties as they come to envision saving the world in different ways. Some rise to heights of heroism; some commit acts of brutality. One is raped and turns to violent resistance; one rapes and spends a decade expiating his crime. Collectively, their lives reveal the price of commitment to “something bigger than yourself.” The Lesser Seductions of History asks, is the commitment worth the price? Maybe, it answers.

The play isn’t perfect. Ten leading characters are a lot to keep track of and hard to portray in depth; some are convincing and vivid; others remain types rather than individuals. Their diversity is to some extent pro forma; they constitute a fairly broad cross-section of the white, educated U.S. middle class (if slightly tilted toward the arts), but George and Martha, the two Black characters, stand for all African-Americans, and Barry and Bobby, the working-class brothers, represent their entire class (although it’s Barry, the athlete-GI, who comes most vividly to life, thanks to Archambault’s powerful performance. Schulenberg does get a lot of the 1960s right, especially the casual brutality with which so many male idealists treated women before Second Wave Feminism raised our collective consciousness. (“Far away stars die/Because they don’t have Marie/To clean up their mess,” declares one of Isaac’s haikus.)

But the heartbreak and the losses the characters suffer — those are real. When the most loving character is driven to a terrible, violent act by conflicting passions; when another realizes that a terminal illness will keep her from seeing the fulfillment of her life’s dream; when still another has to choose between success in his work and the taboo love of his life — Schulenberg’s soaring language brings those crises and griefs home like hammer blows.

That gift for language carries the play and forces us to confront its existential question. “If love was all you did,” says History, “the human race would still be snuggling in caves wrapped in rat-fur, enraptured at the wonder of fire.” But, says Tegan, “When I come back from … the work of moral justice that used to call like a clear bell in my heart, all I feel is alone. And I think … maybe it’s possible to miss your own life.”

No, The Lesser Seductions of History isn’t perfect. It’s just beautiful, and, possibly, great. Keep an eye out for the name August Schulenberg. My best guess is that you’ll be hearing it again.