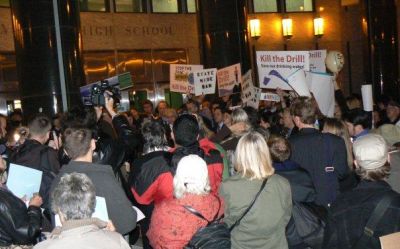 The battle over natural gas drilling in New York state reached a crescendo Tuesday night. Hundreds of city and state residents converged on Stuyvesant High School in downtown Manhattan to have their voices heard on the State’s controversial decision to permit drilling in the Marcellus Shale.

The Marcellus Shale is a geological formation which stretches from New York State to Tennessee and exists about one mile underground. Long thought to contain what could be the country’s largest natural gas reserves, the depth at which the rock was buried made it previously inaccessible. However, last year Governor Paterson signed a law that would allow the shale to be tapped with the combination of two technologies called hydraulic fracturing and horizontal drilling.

Proponents of drilling have recently faced two serious setbacks. The D.E.C. disclosed that its own preliminary tests indicate that hydraulic fracturing process can produce radioactive waste water. Then Toxic Targeting, an environmental database firm based in Ithaca, released a study of the last thirty years of New York State’s own environmental data. It says it found over 270 instances of contamination resulting from gas drilling.

“Contrary to repeated government assurances, state regulation of natural gas wells has been woefully insufficient for decades,” said Walter Hang, President of Toxics Targeting. “The D.E.C.’s failure to prevent and clean up natural gas hazards is so egregious that no further gas wells should be permitted until all regulatory shortcomings have been fixed,” he added. Hang notes that the wells already use hydraulic fracturing technology but the new regulations would allow horizontal drilling which he says would increase the risk of contamination.

The Tuesday hearing was the sole opportunity for public comment on the S.G.E.I.S. in New York City. Hundreds of concerned citizens, politicians and activists attended a rally prior to the hearing, which was hosted by the D.E.C. The participants were nearly unanimous in their opposition to drilling in New York City’s watershed, which become the rallying cry for many city activists, politicians and residents.

Ramsey Adams, executive director Catskill Mountain Keeper, an environmental advocacy group, attended the rally and was critical of the D.E.C. He told The Indypendent, “The draft supplemental is woefully inadequate and they need to go back to the drawing-board.” He said that grassroots organizing has been central in raising the public’s awareness and pressuring the state to approach the proposed drilling with caution. “The [D.E.C wasn’t] even going to hold public hearings, they were trying to slip this through,” he said.

Also in attendance was attorney Jay Simpson from Riverkeeper, a New York-based environmental group that works to protect the state’s water supply. He told The Indypendent that he is calling for an another extension of a public review period, which the D.E.C. recently moved from Nov. 30 to Dec. 31. “The public needs more time to to review the [environmental impact study]. Its a massively complex document, its long, its difficult to understand and is fraught with problems and needs to be thoroughly studied before the public can review it.” He added, “It makes no sense whatsoever to have industrial drilling within this source for drinking water.”

Adams noted that raising awareness of of the potential effects of drilling have been a posed a huge challenge, “Its been up to people like Catskill Mountain Keeper, the Damascus Citizens for Sustainability, Shaleshock, local groups to get the word out. We are organizing people to come to these hearings, to inform them, to educate them.” he said, adding, “The truth is the deck is stacked against us.”

Stringer added, “The reality is that the environmental movement that is being created here is really for two reasons. Its about the safety of our drinking water, but its also about the New York City economy.” He continued that if there is contamination of the city’s watershed, the federal government will order the city to build filtration system. “It will cost $10-$30 billion dollars a year. That’s money that should go for education and health-care for the next generation of New Yorkers,” Stringer said.

Harlem resident Walter Edwards expressed his support for Stringer. “The people are standing behind Scott Stringer and all of those who are in favor of stopping the drilling,” he said. “[The D.E.C.] needs to start paying attention because [this issue] is not going away,” Edwards added.

Samira Swanston, a graduate professor at Hunter College assigned her environmental planning class to attend and submit comments at the hearing. “We all want to have proper planning for New York’s future and we don’t want our water jeopardized, she said.” However, Swanston says she has stopped short of calling for a state wide ban to focus on opposing drilling in the watershed. “I don’t want anyone’s water polluted, but we really can’t take a chance when we are talking about 15 million people’s drinking water.”

However, many at the hearing are demanded that the state go further than just banning drilling in the city’s water supply. There were several disruptions during the hearing from activists who are demanding the state-wide ban on all drilling that uses hydraulic fracturing and horizontal drilling. As the hearing began, an activist took the stage and declared, “We want a statewide ban. We don’t need hearings to regulate this. Gas drilling is dangerous and we need to ban it.” He was quickly escorted out by police.

While Stringer opposes gas drilling in New York City’s watershed, he has yet to support a statewide ban on drilling in the Marcellus Shale, which other city politicians, such as Councilman Tony Avella have supported. Stringer said, “I think we have to look at this one step at a time. But we really want to make a campaign that builds coalitions, gets us to talk realistically to our state officials.”

Stringer continued, “The first step in a long campaign is to first protect the watershed. Then going forward we are going to have to work with communities in the Marcellus shale, and through that we will build a consensus,” he said.
Bill Wallock was among those calling for a statewide ban. A resident of a Armonk, New York, Wallock says he was disappointed that more groups have not called for a ban on drilling in areas beyond New York City’s watershed. “If you are an environmental activist why are you only concerned about people in New York City, why aren’t you concerned people across the entire state of New York? Why are we only focusing only on New York City’s water?” he asked.

“It’s great that so many groups and elected officials are opposing the gas drilling,” commented Betta Broad, deputy director of Earth Day New York, “but it concerns me that some are only calling for a ban in the City’s watershed, taking a NIMBY (Not In My Backyard) stance instead of working to protect the entire state from the harms of hydro-fracking,” she said.

Public hearings are continuing throughout the state.

For more of The Indypendent‘s coverage, read Drilling Deep Into Controversy by Jessica Lee and The Boom by Arun Gupta.