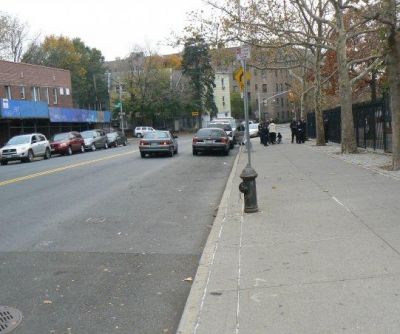 When Estalin Valentin arrived at Hart Park in Woodside, Queens this morning, he was in for a shock. For the first Tuesday in five years, there was no hot meal waiting for him.

The park had been the site of a weekly mobile soup kitchen visit by the St. Johns Bread and Life program. When Valentin, a day laborer and Ecuadorian immigrant, arrived this morning, the NYPD was on the scene, but there were no food being served. He told The Indypendent this was the first time he has missed the free Tuesday morning breakfast.

According to Carlos Perez, who has works for the Mobile Soup Kitchen, the police told his boss, Kathy Byrnes the director of the program, that the park was going to be a site of a demonstration against the free breakfast and the day laborers presence. To avoid a confrontation, Perez said the NYPD asked Byrnes to not serve her breakfast at its usual location.

Perez confirmed that this was the first Tuesday since the mobile soup kitchen began five years ago that it was unable to serve its Tuesday morning breakfast at the corner of 69th and Broadway. The Soup Kitchen was relocated 7 blocks away to the corner of 69th Street and Woodside Ave.

In recent months some local residents have complained to the police of the day laborers presence around the Park. On several occasions police have removed the men, who use the park’s restrooms and benches during and after their meal, from the park.

In one incident on July 17th, 2009, the NYPD removed several men eating their Tuesday morning meals from the after receiving a 911 call claiming that men were urinating in public. Brynes responded in a statement saying, “since I have been coming to this park the last two years, I have never seen anyone urinate in the park”.

Roberto Menesses, president of Day Laborers United, a day laborer advocacy group, says the day’s events were typical of a broad pattern of police harassment. He had got word of the anti-day laborer protest, and in an email blast the night before had called for a counter-rally. When asked about failure of any demonstrators to show up, Menesses gestured to the police, “Thats your anti-immigrant protest right there,” he said.

Perez he could not explain why the demonstrators chose a Tuesday morning. ” Its sad, ” he said, “we only come once a week. I could understand if we were destroying the neighborhood,” he said. “We just come for a little while, feed whoever is hungry, do some social services and we leave,” he added.

However, the demonstration failed to materialize. The NYPD officers at the scene refused to comment.

Hart Park has been a longtime flash point between some local residents who complain that large number of men gather around the park, and the day laborers who who congregate in search for a job. 17 months into the economic downturn, Byrnes says that she has seen the number of meals she serves at her only Queens stop increase by 40-45%.

For more of the Indypendent’s coverage read “Its No Walk in the Park for Day Laborers” by Karen Yi and Jaisal Noor.