Claireece “Precious” Jones (Gabourey Sidibe) is the shining star of her own imagination. Surrounded by bright lights and flashing cameras, she’s a magazine cover model with dreams of being in music videos and having a light-skinned love interest. Then reality intrudes — Precious is obese, illiterate, unloved and unwanted. Pregnant with her father’s second child, she silently endures unbridled physical and sexual abuse at home and the ridicule of her peers at school and around Harlem. Her mother, Mary (played to cruel perfection by Mo’Nique), spends her days watching TV and destroying her daughter’s self-esteem.

The film’s dynamite performances — including Mariah Carey as a social worker and Lenny Kravitz as a male nurse — and unabashedly raw storytelling save Precious, directed by Lee Daniels, from becoming just another film championing the underdog. 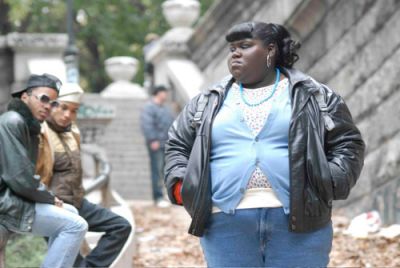 When 16-year-old Precious is facing expulsion from school, a concerned teacher encourages her to enroll in an alternative high school. It is in Ms. Rain’s (played by Paula Patton) English class that Precious finds a group of tough-yet-supportive peers and a teacher who breaks through to her.

Using an almost all-female, African-American cast, Daniels’ decision to vilify Mary makes the film fall short. By transforming her into a monster, he fails to account for systemic issues of social and racial inequality — thus making the film’s larger message of “pulling yourself up by your bootstraps” more believable.

While the demonization of characters like Mary is disheartening in the white mainstream media, it is even more difficult to stomach in a Black film.

Besides a title card in the beginning of the film and some outdated hairstyles, there are few indications that the film takes place in the Harlem of 1987 — in the midst of the Reagan administration’s War on Drugs and Mayor Ed Koch’s welfare cuts.

By ignoring these political realities and the role they played in creating a permanent Black underclass, Daniels disregards a crucial aspect of his characters’ lives.

The image of the “welfare queen” is a social stereotype that an astounding number of Americans still buy into. The problem with Mary’s character is that she commits horrendous acts for no reason whatsoever. Even when Mary pleads with Precious’ social worker for custody of her grandchildren and her daughter in the film’s climax, Mary is reduced to a woman chasing a government check.

However, it’s important to remember that Precious is about one family and their journey through Harlem, and as a singular story, the film delivers. More than just a typical Tyler Perry tome preaching the virtues of Christianity through layers of clichéd storylines, Daniels succeeds in making Precious realistic without compromising the story’s grit.

By the end of the movie, Precious goes through a rebirth of sorts, one that takes her from the cruel existence of the solitary life she leads in her mother’s house to a world of independence and self-worth.

There has already been considerable Oscar buzz surrounding both Mo’Nique’s and Sidibe’s performances, and the film received the Grand Jury Prize at Sundance and the People’s Choice Award at the Toronto International Film Festival.

Daniels is no stranger to tackling tough subjects, with past credits including Monster’s Ball, The Woodsman and Shadow Boxer. The film may be problematic in a social context, but the performances are disarming, dynamic and original enough for the viewer to become engaged in the story for almost long enough to overlook these flaws.
This review was adapted from an article that originally appeared in ColorLines.