While the story of Wal-Mart’s global domination — complete with big-box stores, the destruction of local businesses and anti-union sentiments — is fairly well known, the way in which this retail giant overcame local fears of big business and corporatism in the heart of the Ozarks, is not.

In To Serve God and Wal-Mart, Beth Moreton, a history professor at the University of Georgia, examines how Wal-Mart, with its headquarters in Bentonville, Ark., “arose in the fiery heartland of anti-monopolism.” In the late 19th century anti-corporate sentiment ran high among rural Ozark settlers, or as Moreton termed them, “the mythic original citizen, the yeoman.” They called for the government to repatriate Indian lands to whites, keep “foreign monopolies” at bay and build railroads to allow for economic activity. These sentiments continued well into the 1930s, when Depression-era farmers pressured the federal government to regulate business and provide economic protection for the little guy. The farmers may have distrusted corporations, but they imitated their structures in order to get a piece of capitalism’s riches by embracing modern business techniques to market their goods and banding together to form cooperatives.

These conflicting currents within economic populism had to be settled for Sam Walton to build his retail empire from its Ozark base. 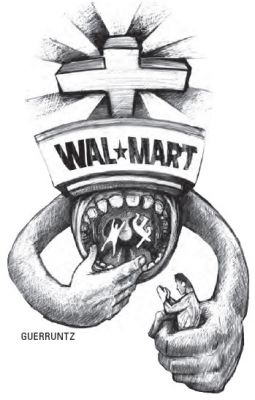 Walton, who opened his flagship store in 1962 in Rogers, Ark., sought to channel the farmer cooperative sensibility into his stores by hiring Ozark men — many plucked off the farm or only a generation removed from agrarian life — for middle-management positions. But the most important, and illuminating, point in To Serve God and Wal-Mart is how Walton tapped into the pool of cheap white female Ozark labor and appealed to their Christian values to create what the author calls “servant leaders.”

Walton knew his region and its people. Women’s housework consisted of shopping and house keeping, and was unpaid and generally undervalued by the region’s dominant white Christian society. The trick for Wal-Mart was to get these white women to view their service-sector jobs as part of Christian service — helping other Christian women (who often were their neighbors) provide for their families through purchasing household items. While Walton was a mainline Protestant and not an evangelical, he appreciated how Christianity could be used as social control over his largely female employees. Women workers would see their Wal-Mart jobs as an extension of their Christian faith and thus be more willing to accept male managerial power and low wages because their work entailed other rewards.

In exchange for white male privilege, Wal-Mart’s well-paid managers worked brutal hours under harsh scrutiny. In a 1993 anonymous memo signed by middle managers, sent to the top brass and forwarded to a union, they wrote that unions were wasting their time with the female service workers and should be focusing on managers instead.

Moreton peppers her book with articles culled from decades’ worth of Wal-Mart newsletters, which feature pieces written by female employees extolling the importance of Christian values in the workplace. The Christian values of service workers and consumers alike have also influenced the type of products the mega-chain sells, as it has become the largest seller of Christian books and other items. The book’s chapters on Wal-Mart’s role in creating neoliberal economic and Christian centric colleges to supply middle managers are less interesting, though notable.

But as free-trade policies took hold in the 1990s, Wal-Mart outgrew the Ozarks and rapidly expanded throughout the globe, making inroads in Canada and Mexico.

Walton’s “servant leader” philosophy has been challenged during Wal-Mart’s push for world retail domination. The chain’s short-lived 1985 “Made in America” campaign ran into the brick wall of cheaply made Chinese goods when Dateline NBC aired an exposé of the company’s sourcing practices in 1992. By 2001, more than 1.6 million current and former female Wal-Mart employees, subject to the good ol’ boy network, brought what is now the largest class-action suit — Dukes v. Wal-Mart Stores, Inc. — against the retail giant, based on years of workplace and wage discrimination. Wal-Mart’s corporate strategy relies on low-wage women workers rightfully valuing their work, but how long can it continue to pay them so little?