With his election to a third term as New York City mayor, billionaire Michael Bloomberg has ensured that the financial capital of the world will remain — at least for the next four years — under the firm control of Wall Street financial firms and the city’s powerful real estate industry.

Never in U.S. history has a single candidate used so much of his own money to trample the democratic process and buy political office.

Bloomberg spent more than $70 million in each of his first two campaigns, against Mark Green in 2001 and Fernando Ferrer in 2005. This year he has doled out more than $100 million to defeat a lackluster, poorly financed Democratic opponent, City Comptroller Bill Thompson.

Thanks to all that cash, New Yorkers faced an unprecedented blizzard of Bloomberg commercials, a constant stream of Bloomberg literature in their mailboxes and endless phone calls from Bloomberg’s massive phone-bank operation.

The direct campaign expenses of nearly $250 million for all three races, however, represent only a small portion of Bloomberg’s actual investment in politics. Since deciding to seek the mayor’s post in 2000, he has also distributed about $100 million annually in philanthropic contributions. Much of that has gone to hundreds of nonprofit organizations located in the five boroughs.

Bloomberg likewise donated $600,000 to Harlem Children’s Zone charter schools. Geoffrey Canada, the organization’s director, then interceded with White House aides in the final days of the campaign to convince President Barack Obama not to campaign for Thompson.

Butts and Canada have denied that those huge donations had anything to do with their endorsements. So have scores of nonprofit directors who also received money from Bloomberg and then publicly backed the City Council’s controversial decision last year to overturn term limits so that Bloomberg could run for a third term.

Given the current economic crisis and the financial strains so many nonprofits face these days, it is hard to imagine the leaders of those organizations mustering the courage to oppose a big benefactor.

Surprisingly, the election turned out to be very close, when you consider all Bloomberg spent, his power as an incumbent and the near -unanimous support he enjoyed from all the major newspapers in town. He received only 50.6 percent of the vote, less than 5 percent over Thompson’s 46 percent.

Voter participation was so dismal — only 25 percent of the registered voters showed up at the polls — that Bloomberg ended up with 200,000 fewer votes than he received when he defeated Ferrer four year ago.

The slim margin reflects the deep alienation many New Yorkers feel after eight years of the Bloomberg era. Perhaps no chief executive in the city’s modern history has displayed more disdain for the needs of working-class New Yorkers.

Bloomberg’s campaign repeatedly stressed how he has dramatically improved publicschool performance, overhauled city government with technological innovation and efficient business practices, revitalized city neighborhoods improved the quality of life for New Yorkers and been a careful steward of city finances.

In some respects, his administration has revealed an enlightened view of government’s role. His ban on smoking in public places, his adding scores of new bicycle lanes throughout the city and his many efforts to defuse racial tensions have been welcomed by many residents.

But those few accomplishments pale next to Bloomberg’s unprecedented effort to centralize the functions of city government, to run roughshod over the voices of local community leaders and parents and to shovel public subsidies to the city’s financial and real estate barons.

Bloomberg refused to intercede as hundreds of thousands of rent-stabilized and Mitchell-Lama housing units were gobbled up by private-equity firms and turned into market-rate housing.

He has repeatedly supported projects that gave away public spaces and government subsidies for luxury developments.

The new Yankee and Mets stadiums, Columbia University’s proposed biotech center, the vast rezoning of Williamsburg- Greenpoint and Hudson Yards in Manhattan, the Willets Point redevelopment in Queens, the Forest City Ratner project in downtown Brooklyn and the Related Company’s Kingsbridge Armory in the Bronx are just a few of these mega-projects that have sucked up enormous public subsidies and benefited developers over local residents.

Now that the real-estate boom has turned to bust, many of those projects have stalled, and the bill is about to come due.

Land policy is likely to explode during his third term. In the next four years, it will be up to the public to keep an eye on Bloomberg’s ongoing policies.

Another area is the increasing computerization of government. Under Bloomberg, who made his fortune with a computerized financial-news system, city agencies spent billions for new computer systems that have not delivered what they promised and have mushroomed in cost — beginning with the new 911 system. Many of those contracts were awarded with little or no bidding. It’s a scandal waiting to be unearthed.

The mayor’s biggest claim has been improving the school system. But as more independent reviews come out of his reforms — from charter schools to improved test scores — proof mounts that much of the progress is smoke and mirrors. City test scores could prove to be as reliable as all those Triple-Arated subprime mortgages Bloomberg’s Wall Street friends peddled.

For more information see “Bloomberg Busts Out the Cash” by Steven Wishnia and “Council Members to Keep an Eye on” by John Tarleton, both in this issue of The Indypendent. 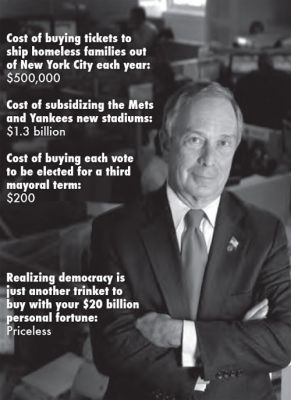