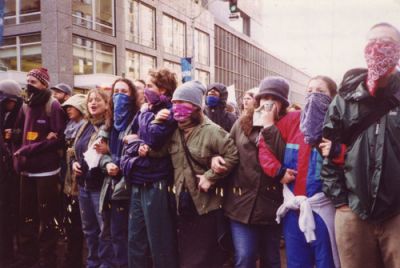 It was still pitch dark outside and a thin, cold mist was in the air when the affinity groups charged with blockading Sixth Avenue and Union Street met for the last time. Scouts reported that the coast was clear. Sitting in the wooden pews of an old downtown Seattle church we reviewed our target once more. After days of nervewracking preparation, we were ready to do our part to shut down the World Trade Organization (WTO).

A colorful procession of 80 people left the church, papier-mâché butterflies hovering overhead as we walked quietly toward the WTO meeting site. When we arrived at the intersection, the police remained frozen in their position across the way. And just like that, the intersection was ours.

Those of us who were prepared to be arrested locked arms and sat down on the wet pavement in front of the police line. Dancers and drummers soon filled the rest of the intersection as the butterflies bobbed above the festive throng.

Similar carnival-like scenes were unfolding throughout downtown Seattle on Nov. 30, 1999, as thousands of people poured into the streets while government ministers and corporate lobbyists found themselves trapped in their luxury hotels. Laid-off steelworkers and tree-huggers marched side by side. Critics of sweatshops and genetically engineered foods made common cause with farmers from France and South Korea, indigenous peoples from throughout the Americas and opponents of oil drilling in the Niger Delta.

Even then, the fog of media misreporting was thicker than the tear gas unleashed by the local police. Today, the Seattle WTO protests are eerily relevant as the dangers foretold a decade ago about the workings of global capitalism have come to pass, yet remain unaddressed.

The goal of the Nov. 30 direct action was to shut down talks at a WTO ministerial meeting in which the world’s wealthiest nations sought to impose a global trade agreement that would have greatly empowered large corporations at the expense of local communities around the world. Almost any social, economic or environmental legislation that hindered profit-making would be defined as an “illegal trade barrier.”

Two visions of globalization — one top down and authoritarian, the other grassroots and bottom-up — collided in Seattle, and the rest became history: barrages of tear gas and rubber bullets, shattered storefront windows, the National Guard called in to suppress the protests, almost 600 people jailed, the collapse of the talks on the final night of the summit when African and Caribbean delegates stood up to the demands of the rich nations.

Chants of “This is what democracy looks like!” could be heard rippling through the crowds as the week progressed and by the time the WTO left town a global “movement of movements,” which had pre-dated Seattle by many years in countries of the Global South, had gained worldwide attention.

So, what did it all mean?

For the WTO, Seattle was a debacle from which it is still trying to recover a decade later (see box below).

In the United States, the protests elicited wildly divergent responses. Sixties-era radical Tom Hayden hailed Seattle as the harbinger of a new era of social justice activism while establishment mouthpiece Thomas Friedman derided “the Seattle circus” as “a Noah’s ark of flat-earth advocates.” The U.K.-based Economist put a forlorn-looking Asian girl on its cover and announced that the real losers in Seattle were the world’s poor, which the WTO sought to assist.

The U.S. public’s understanding of what had happened was heavily influenced by the repeated use of images of a small group of black-clad protesters operating on the periphery of the demonstration smashing the windows of chain stores like Starbucks, Niketown and the Gap. The notoriety these actions gained sparked passionate debates among activists about whether the actions of the “Black Bloc” had helped or harmed the protests.

Still, despite such controversies, it felt as if a door had unexpectedly flown open. We got a glimpse of a just, sustainable world that, for once, seemed obtainable. At a time when U.S. wealth and power was at its zenith, many thousands of young people in this country began to actively question how that wealth was being created and to what end. Inspired in part by Seattle, they formed direct action affinity groups, legal and medical first-aid collectives, Indymedia centers that offered anyone the chance to be a citizen journalist, newspapers like The Indypendent and much more. A series of protests rolled across the globe during the next two years wherever world leaders gathered. It seemed we had the bastards on the run. But, much of these efforts were built on faulty assumptions. 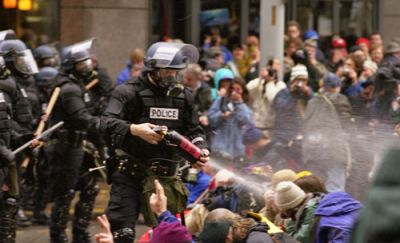 Shutting down the WTO was intoxicating but impossible to duplicate without the element of surprise. The police would never be caught unprepared again. Protesters confused a single tactic (“Shut it down!”) for a strategy and then allowed it to become an end in itself. Longer-range organizing rooted in speaking to people’s everyday concerns (which contributed greatly to success in Seattle) was rarely practiced in the U.S. wing of the global justice movement. That the movement was middle class and had minimal participation by people of color further isolated it.

Chronic weaknesses of the postmodern left — an aversion to any form of power as inherently evil and a consequent lack of organization and resources — were embraced. This was exacerbated by an over-reliance on consensus-based decision-making, which requires unanimous agreement among group members. In such a hothouse environment where everyone can debate everything and anyone can block a decision, it becomes easy to think that sitting through an intense fourhour meeting was the revolution when it was just a needlessly long meeting.

The September 11 attacks exposed all these weaknesses. Finding its freewheeling street protests suddenly out of fashion, the global justice movement in the United States had nothing deeper to keep it rooted. It dissolved into its constituent parts. Many individual participants turned their full attention to locally based projects.

As for me, I immersed myself in my work as the coordinator of The Indypendent, which I joined shortly after its inception in the fall of 2000. Memories of Seattle quickly receded as Bush administration calamities (Iraq, Katrina, lack of action on global warming, etc.) piled up, while here in New York a billionaire mayor aggressively pushed a neoliberal agenda of gentrification and privatization.

Looking for other channels to express their values, people continued to mobilize on a massive scale from the antiwar movement that crested in the run-up to Iraq Invasion to the Anybody But Bush push that brought a half-million people into the streets of New York during the 2004 Republican National Convention and saw thousands of volunteers journey to swing states to canvass for Bush’s opponent. In 2008 the Obama campaign used the latest social media technologies to harness the participation of an unprecedented number of campaign volunteers who fervently hoped the young Illinois senator would lead a shift away from business as usual in this country.

Instead, Obama has responded to the worst economic downturn in 80 years by turning to many of the same Wall Street insiders who created the mess. The media have settled back into their role as cheerleader for a rising stock market index. Through it all, the left has been mostly quiet while the protest void has been filled by fringe right-wing groups.

Protesting cannot substitute for the hard work of organizing broad-based social movements. However, 10 years after the Seattle uprising, a similarly vibrant, hopeful spirit of resistance is needed — more urgently than ever. While naive in some ways, we were the true realists about the things that really matter, like creating an economy that benefits the many, not just the few. It is the free-market ideologues who were deluded.

John Tarleton is the Associate Editor of Clarion, the newspaper of the Professional Staff Congress, a progressive union that represents the 22,000 faculty and professional staff at City University of New York (psc-cuny.org). 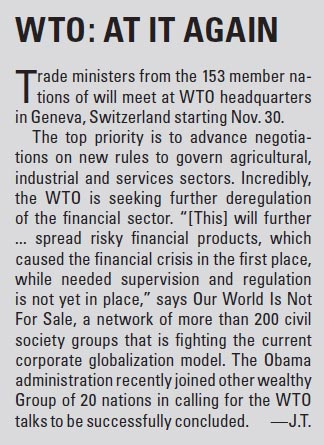