The government’s seven-year legal vendetta against Lynne Stewart entered a new phase on Nov. 19 when the outspoken human rights attorney entered the Manhattan Correctional Center after a federal appeals court revoked her bail and ordered her trial judge to reconsider her “breathtakingly low” sentence.

Stewart was convicted in February 2005 of aiding terrorism by smuggling a press release from her imprisoned client, Sheikh Omar Abdel Rahman, to his followers in Egypt. The case against Stewart revolved around her refusal to abide by Special Administrative Measures (SAMs) placed on Abdel Rahman, who is serving a life sentence for terrorism-related crimes.

Stewart was sentenced in October 2006 by trial Judge John M. Koeltl to 28 months in jail. The government had sought a maximum 30-year sentence, but Judge Koetl opted for a more lenient punishment, noting Stewart’s long record of serving poor and underprivileged clients. 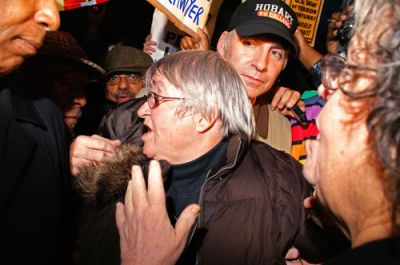 Stewart’s relatively light sentence outraged her critics. Now, she must remain in custody while her lawyers argue what sentence is appropriate and while a new presentencing report is prepared by the U.S. Probation Department. She is due to be re-sentenced on April 22. The government is asking for a “terrorism enhancement” which would result in a 30-year sentence.

Stewart’s legal troubles date back to spring 2000 when she forwarded the press release from Abdel Rahman to a Reuters correspondent in Egypt. In the press release, Abdel Rahman urged his followers in the Islamic Group (IG) to reconsider a three-year ceasefire they had observed in relation to the Egyptian government. This breached the SAMs agreement that Stewart had signed. SAMs restrict lawyers from relaying messages from inmates deemed too dangerous to communicate with the outside world.

Stewart took on Rahman as a client at the urging of the late renowned attorney William Kunstler. She testified that her goal was “to keep the Sheik alive in the memory of his followers,” in hopes that, through political channels, she could get him transferred to Egypt to finish his sentence. No violent acts were carried out by the IG following the issuing of Abdel Rahman’s press release.

Noted criminal defense lawyer Ronald Kuby has said that it was “not uncommon” before the 9/11 attacks for lawyers to circumvent SAMs restrictions.

In April 2002, the government came after Stewart with a vengeance, summoning all the fears present in the immediate aftermath of 9/11. Stewart’s office was raided by counter-terrorism federal agents, she was hit with multiple felony counts and virtually branded as a traitor. She was the first lawyer to be indicted on terrorism-related charges, raising fears that defense lawyers who represent unpopular clients would be increasingly targeted by the government. Much of the government’s case was based on secret tapes of her conversations with her client.

“This case would never have been brought except for the fear generated and the advantage that the Bush administration was taking of it by the events on Sept. 11, 2001,” said former U.S. Attorney General Ramsey Clark.

The scapegoating of Stewart continued in the trial when the prosecution was allowed to introduce videotapes of Osama bin Laden in the courtroom, even though neither Stewart or her client had a relationship to the Al Qaeda leader. After a seven-month trial and 13 days of jury deliberation, Stewart was found guilty. Her co-defendants Ahmed Sattar, who acted as a paralegal for Abdel-Rahman, and Mohammed Yousry, an Arabic translator were also found guilty. Sattar was sentenced to 28 years in prison while Yousry received a 20-month sentence.

The government appealed Stewart’s 28-month sentence as too low. Stewart’s lawyers made a cross-appeal arguing that the SAMs were an unconstitutional infringement of an inmate’s right to receive and transmit ideas, as well as a violation of the attorney-client privilege. Her appeal was denied.

The history of this case demonstrates that the real target of the prosecution is the right to counsel. Pointing to the upcoming terrorism trial in New York of five Guantánamo prisoners, Stewart noted as much at a press conference held immediately after her bail was revoked.

“This was a warning to lawyers to do it the government’s way,” Stewart said, “to pay attention to what the government rules are, not to even stray up to the line, otherwise you will end up like Lynne Stewart.”

Lynne Stewart wrote to supporters shortly after she was imprisoned at the Manhattan Correctional Center (MCC) Nov. 19.

Well, the moment we all hoped would never come is upon us. Good bye to a good cup of coffee in
the morning, a soft chair, the hugs of grandchildren and the smaller pleasures in life. I must say I am
being treated well and that is due to my lawyer team and your overwhelming support.

While I have received “celebrity” treatment here in MCC — high visibility — conditions for the other
women are deplorable. Medical care, food, education, recreation are all at minimal levels. If it weren’t for
the unqualified bonds of sisterhood and the commissary, it would be even more dismal.

My fellow prisoners have supplied me with books and crosswords, a warm (it is cold in here most of
the time) sweat shirt and pants, treats from the commissary, and of course, jailhouse humor. Most important,
many of them know of my work and have a deep reservoir of can I say it? Respect.

I continue to answer the questions put to me by them, I also can’t resist commenting on the TV news
or what is happening on the floor — a little L.S. politics always! (Smile) to open hearts and minds!…

I want to say that the show of support outside the courthouse on Thursday as I was “transported” is
so cherished by me. The broad organizational representation was breathtaking and the love and politics
expressed (the anger too) will keep me nourished through this…