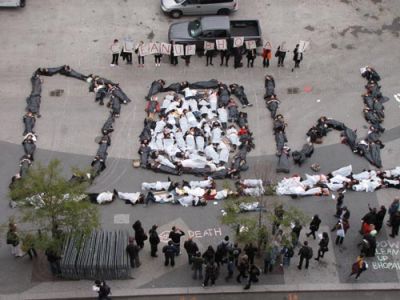 Hundreds of students from Parsons The New School for Design used their bodies to spell out the words D-O-W in Union Square Dec. 4 in a “die-in” to bring attention to the 25th anniversary of the disaster in Bhopal, India. At midnight on Dec. 2, 1984, a 27-ton cloud of lethal gas leaked from the Union Carbide pesticide factory in Bhopal. At least 8,000 people died from chemical exposure within three days, leaving hundreds of thousands of victims to suffer long-lasting health problems. Protests took place around the world in early December calling for accountability from the Indian government and Dow Chemical Company, which bought Union Carbide in 1999, and claims it is not responsible. A newly released study from the Bhopal Medical Appeal reveals that chemical levels remain dangerously high in the area’s drinking water. Claiming it is now safe, the Indian government had announced plans to open up the site of the pesticide plant for the 25th Anniversary, but recently reversed its decision after protests from survivors. Indian courts have charged former Union Carbide CEO Warren Anderson with manslaughter, but the United States has refused to extradite him. He lives in Long Island. For more information, visit the International Campaign for Justice in Bhopal (bhopal.net) and The Yes Men (theyesmen.org). PHOTO: NANCY BROGDEN, THEYESMEN.ORG