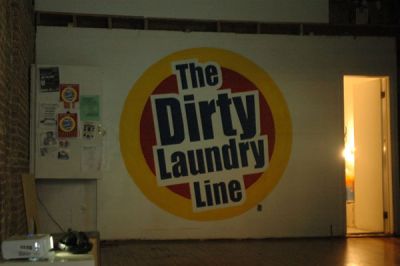 “I came back and every single thing in my apartment was destroyed. Many people moved away…I would not.” Thus begins one of the eleven stories that make up Housing is a Human Right, an audiovisual piece by Michael Premo and Rachel Falcone currently showing in various locations in Brooklyn.

Part photographs and part recorded narratives, the show presents a vision of New Yorkers in flux: one couple moves here after medical bills cost them their home; divorce ejects a man from Queens into the Bronx. Another couple ends up in a shelter after one of them leaves a lucrative Wall Street job to care for the other, who has HIV.

The two-part show appears in two different locations. The audio is currently at the Superfront gallery at 1432 Atlantic Ave. The photos were displayed at the Wash-N-Play lotto, a laundromat on Lafayette Street in Fort Greene: one row hung up high above the washers; on the opposite wall a few boards with a grid of small images—like large contact sheets. The laundromat also featured a board for viewers to comment and a plethora of flyers on the show’s sponsors, which blended seamlessly with the ads for handymen and local services around it.

Some of the images are cutting: A couple sleeping on a leopard-print futon, framed by large plastic bags. Laundry drying in a dingy kitchen, like a curtain framing piles of trash bags by the back wall. A red-brick project tower with the ghostly image of a white two-story house superimposed on the bottom third. There’s no obvious connection between many of the photos in the show and the audio (captions are absent), which gives the images an air of mystery – you don’t immediately know who’s who and that moment of hesitation further highlights the nebulous nature of housing in the city, and the ubiquity of struggle.

Shady landlords and shoddy shelters are taken as a matter of fact in New York, but these narratives go beyond the obvious stories of homelessness to focus on the gray area between having and not having a home, and the struggle to hold on to any available shelter. The interplay of community and isolation figures strongly in these stories.

For Rob Robinson, an assistant vice president at his job who moved to Miami for a promotion and was laid off four months later, “it hadn’t settled in until I got hungry.” He continutes, “I slept for about two years on Miami Beach,” though he had distant relatives nearby—he didn’t want to ruin his reputation as the strong individual in his family.

An elderly woman on a fixed income confides that living with roommates is “one of the hardest things I’ve ever done,” as she struggles to live within the budget mandated by her fixed income. Another woman talks about her strong connection with her neighbors in public housing and describes confronting plainclothes police as they were harassing a group of young black men by her home.

Photographer Premo, a former resident of Fort Greene, says he picked the “Wash-N-Play lotto” to engage with the community he has been pushed out of. A theater performer, Premo met Rachel Falcone, who created audio for the project, when they were both working at StoryCorps.

“For many, human rights are an intellectual abstraction” says Premo, who cites the Lower East Side squatter movement as one inspiration for the project, which was initially focused on documenting “neighborhoods laid to waste by gentrification.” He adds that the show has received overwhelmingly positive responses from the people who use the laundromat, some of whom identified strongly with the communities portrayed. Premo and Falcone are currently working on a spin-off show in the vein of Housing is a Human Right focusing on victims of foreclosure.

At the Superfront gallery, two more exhibits accompany Housing until December 12. Carlos Martinez’s Photo Booth Without Borders features an audio slideshow of residents in Jackson Heights, where he lives, describing their community and its ups and downs. The photo booth itself is also on display, as if asking to be taken around the city and elicit the same showing of kinship from other neighborhoods. Tracee Worley’s installation, The Dirty Laundry Line, features a  hotline that visitors can call to share their secrets, which are then displayed online at thedirtylaundryline.com. The project makes its appearance at Superfront via a whitewashed box with titillating confessions scribbled on the inside.

All three have been created as part of The Laundromat Project, an residency program for public artists that focuses on engaging a community with art by displaying your work in a local laundromat.

Superfront gallery is located at 1432 Atlantic Ave. between New York Ave and Brooklyn Ave. Gallery hours are 1- 6 p.m. Saturday and Sunday, and by appointment.