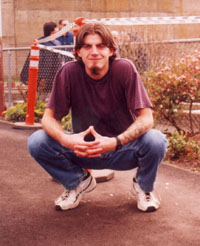 Jeff “Free” Luers, political prisoner and environmental activist, was released from the Columbia River Correctional Institution this morning after serving nine and half years. Luers was originally sentenced in 2001 to 22 years and eight months for the politically motivated arson of three SUVs at a car dealership in Eugene, OR. This sentence was deemed grossly disproportionate to the damage sustained by the car dealership and was condemned by legal professionals, human rights groups and activists worldwide. At an appeal hearing in 2007 it was ruled that Luers’ original sentence was illegal, and was consequently reduced to 10 years.

Luers’ release today comes after what Oregon Department of Corrections described as a “mistake” when they released him early on Oct. 20 this year. After a few short hours of freedom, Luers was taken back into custody in Eugene after the State agency reversed its decision and determined that he did not qualify under the new House Bill 3508 for an additional 10 percent reduction in sentence. The Department of Corrections’ gross incompetence in this situation, and the emotional toll borne by his family and loved ones, is just one of many examples of the distressing levels of bureaucratic impropriety that Luers has endured during his years behind bars.

Upon his release this morning, Mr. Luers stated:

“The last nine and a half years have been difficult at best. I have witnessed things in prison that I will carry with me for the rest of my life. I have endured hardship and loss. Without a doubt, this experience has changed
me. What hasn’t changed is my commitment to environmental and social justice.”

“I would like to thank all the people who have supported me through the years; especially the dedicated few who worked tirelessly to get me out of prison. I look forward to spending time with my loved ones and continuing my education, as well as continuing my activism.”

During his time in prison, seven of which were served in maximum security, Luers has maintained his activism by writing about environmental and social justice issues. In particular, he has continued to bring attention to the specter of human- induced climate change, the cause that motivated Luers to set fire to three SUV’s in 2000. Since his original sentencing, awareness of climate change has become omnipresent. It seems ironic that Luers has been released during the Copenhagen Climate Summit where world leaders are converging around the need for extreme action to be taken on global carbon emissions.