﻿‘You Have to Put Your Own Life On the Line’: An Interview with Hedy Epstein 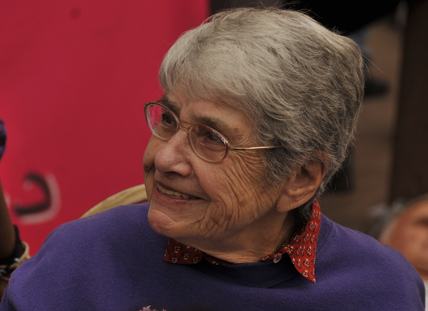 CAIRO, December 28—At 85, Hedy Epstein is one of the oldest of the Gaza Freedom Marchers. She may also be the only Holocaust survivor among them.

This morning, Epstein began a hunger strike to up the ante for the Egyptian government’sattempts to prevent delegates from around the world from participating in the march. We spoke during the protest at U.N. headquarters in Cairo, as the Freedom Marchers demanded that theUnited Nations intervene to allow to march to proceed to Gaza.

“I was born in Germany,” she said. “I was eight years old when Hitler came to power. My parentswanted to get out and were willing to go [almost anywhere], but there was one country they wouldn’t go to: Palestine, because they were ardent anti-Zionists.”

Epstein, however, did get out of Germany. She was brought to England, which “took in almost 10,000 children in the nine months before World War II.” At the end of the war, by then in her 20s, she went back to Germany to work for the U.S. government and “to try to find my parents.”In 1948, she came to the United States—at “almost the same time as Israel became a state.” She had mixed feelings about Israel, she said. “I was glad that there was a place for Holocaust survivors to go, but on the other hand, I remembered my family’s anti-Zionism, and I was afraid that no good would come of [the Jewish state].”

In 1956, she finally found out what had become of her family: Her parents (and other relatives) had perished at Auschwitz. In the United States, Epstein became an activist for, among other causes, peace and affordable housing. But she described Israel and Palestine as “on the back burner of my interests” for almost three decades—until the 1982 “wake-up call” that was the Sabra and Shatila massacres, when Lebanese militia forces massacred hundreds of Palestinians in two Lebanese refugee camps. From that point, her primary cause became the Palestinians and the end of the occupation.

She was in Cairo this morning, she said, “because I was on my way to Gaza with the Gaza Freedom March, at this point being stopped by the Egyptian authorities.” The march is “trying tobreak the siege of Gaza imposed by the Israeli government, and I suspect that the Egyptian government is under pressure by the U.S. and Israeli governments” to stop the march. 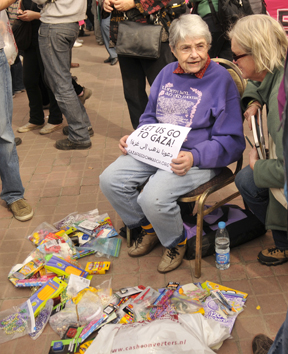 There was a protest going on around us, and we had to finish our conversation. Epstein summed up: “I’ve been in human and civil rights struggles for a long time, and I’ve never been on a hunger strike before, but I [also] never saw a government deny humanitarian aid before. There comes a time in a struggle when you have to put your own life on the line, so I decided to go on a hunger strike to try to persuade the Egyptian government to let us go.”

The attempt to persuade Egypt to let the marchers into Gaza continues. So does Epstein’s hunger strike. Other freedom marchers are joining her.