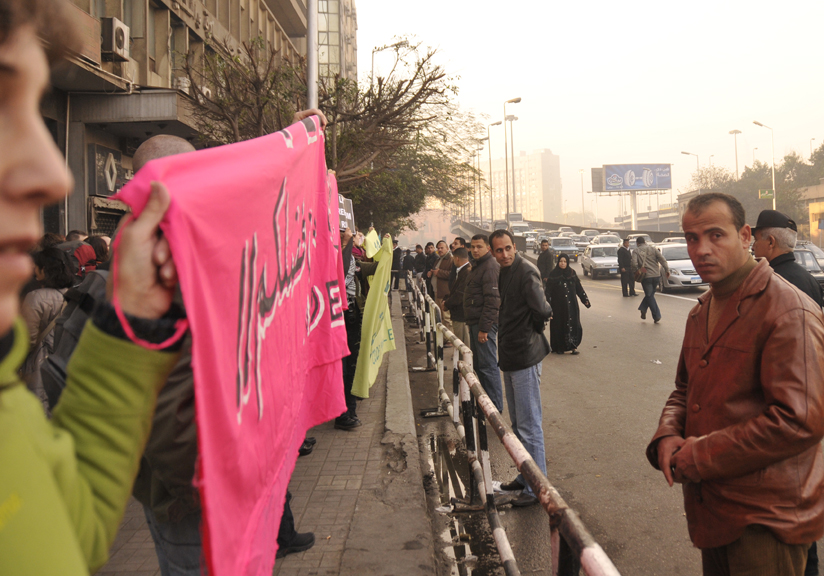 CAIRO–At 7 am today, about 100 Gaza Freedom March (GFM) delegates met near the bus station from which the marchers were originally planning to set off today for Gaza. No one was actually going anywhere, because the Egyptian authorities had cancelled the buses that organizers had arranged, but the GFM participants gathered anyway, to draw attention to the fact that they have been prevented from bringing material aid to the residents of Gaza because the Egyptian government is refusing them entry to the territory through the Egyptian-controlled Rafah crossing. The marchers stood on the sidewalk holding banners that could by seen by passing drivers, chanting and singing songs. As has become usual, they were faced with a solid line of Egyptian police directly across the barricades the police had set up.

The 1362 GFM participants from 42 countries have brought tens of thousands of dollars worth of material aid to deliver to Gaza. This includes supplies bought with $17,000 raised singlehandedly by Julia Hurley of New Jersey, much of it contributed by the Arab-American of Passaic County, N.J. Several laptops and some 700 backpacks filled with school supplies, hygiene products, toys, and jackets for ages 5 to 17 are sitting in a warehouse in Cairo waiting for a way to be found to get them to schoolchildren in Gaza. Other material aid items waiting to be delivered include water filtration systems, textbooks, and art supplies.