CAIRO–Yesterday afternoon hundreds of people converged at the spot on the Nile in Cairo from which the feluccas–traditional Nile sailboats–depart to take tourists. We were going to take dozens of feluccas out into the middle of the river and set afloat candles to commemorate the 1,417 killed by the Israeli assault on Gaza a year ago. 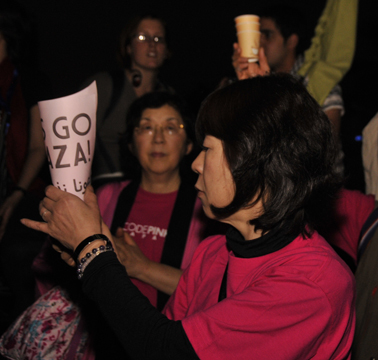 We never got to the river.

The feluccas had been shut down, we were told, for maintenance, but the large number of police present suggested a different reason. Instead, we gathered around for an impromptu rally. Medea Benjamin of Code Pink, one of the main organizers of the march in the United States, spoke ofour determination to get to Gaza, despite the Egyptian government’s refusal to let us through the border. 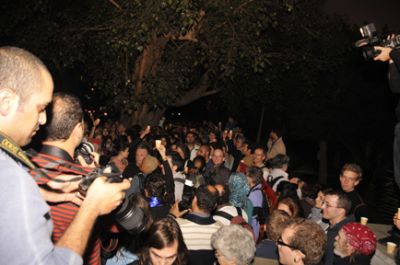 As more and more activists from the

Earlier in the day, according to a GFM press release, police had stopped another action by GFM participants to commemorate those killed in the Israeli invasion of Gaza that began on December 27, 2008. GFM activists had tied hundreds of strings with notes, poems, art and the names of those killed to the Kasr al Nil Bridge, one of the main bridges connecting Zamalek Island, in the middle of the Nile, to Cairo. 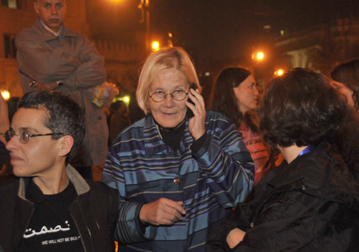 “We’re saddened that the Egyptian authorities have blocked our participants’ freedom of
movement and interfered with a peaceful commemoration of the dead,” said Ann Wright, a GFM organizer.

Meanwhile, the Egyptian government continues to refuse to allow us to go to the Rafah border crossing and into Gaza. March participants have brought tens of thousands of dollars worth of aid for the residents of Gaza, and were planning to participate in a massive march with Gazans to
protest the ongoing Israeli blockade of the territory, which has prevented rebuilding materials from being brought in following the destruction of the Israeli bombing and invasion of a year ago.

At this time, according to GFM organizers, hundreds of French delegates to the march are camped outside the French Embassy, pitching tents and laying sleeping bags on the sidewalk, chanting “Palestine Freedom!”  The French ambassador and his wife are outside negotiating with the delegates and the police and Egyptian authorities.

GFM organizers are planning more events today, including solidarity actions with the French delegates; an action at the U.N. Agencies and World Trade Center to ask the United Nations to help get them and their supplies into Gaza, and delivering a letter to H.E. Suzanne Mubarak, wife of Egyptian President Hosni Mubarak.