, December 31—At 9:50 this morning, hundreds of Egyptian Museum-bound tourists milled around in downtown . Camouflaged among them were several hundred Gaza Freedom marchers, their “Free Gaza” t-shirts and “My heart is with Palestine”  buttons hidden under jackets, their backpacks holding a day’s worth of water and snack foods. 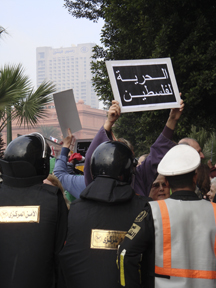 At a few minutes before 10, says marcher Brad Taylor of , the marchers converged and began to march down , waving banners and “Free Gaza” signs in Arabic and English and blocking traffic on half this heavily traveled multi-lane main artery. The Gaza Freedom March was on the march at last, even if most of the international delegates were not in .

In , hundreds of Gazans marched with international activists against the Israeli blockade of the territory, according to Haaretz newspaper. residents have been unable to rebuild since ’s devastating bombing and invasion last year because the Israeli blockade has prevented construction materials from being brought into the area. Some 300 Israeli activists protested on the Israeli side of the Erez crossing.

The members of the GFM delegation in had come from around the world to join the march in , but were unable to get into the territory because the Egyptian government refused to allow them through the Rafah border crossing, which controls. has completely shut down any movement through the Erez crossing at the other end of the territory.

In , the marchers got about 100 yards before they were completely blocked by a solid line of police in riot gear. The police surrounded the marchers from all sides, says , and began to push them very violently, dragging demonstrators off the street and throwing them onto the sidewalk, some pulled by the hair. After ten or 15 minutes of very intense pushing and shoving, the entire group had been moved onto sidewalk. By 11:00, all the marchers were penned in. The police were letting people in–indeed, they were sometimes forcing onlookers into the penned-in crowd. 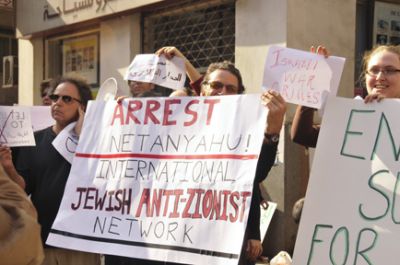 Some GFM participants, however, were unable to join the march, as they were held on the sidewalk in front of the Lotus Hotel, where many GFM organizers are staying. Beginning around 9 am, police barricaded activists on the sidewalk. They allowed non-GFM participants to leave the area, but anyone who looked like they might be part of the GFM delegation was prevented from going outside the police line.

Some 15-20 people stayed out on the sidewalk in front of the hotel, holding banners and signs and chanting “, Open the Border” in Arabic. At about 3 pm, police closed in on them and forced them inside the building, where they were no longer visible to passersby.

As of 3:45 pm, 200-300 protesters were still inside the police circle at . They had set up a makeshift toilet, said Antony Loewenstein, who had been inside since the morning, and were settling for the long haul and strategizing their next moves. “The energy of all the people was just amazing,” he said. 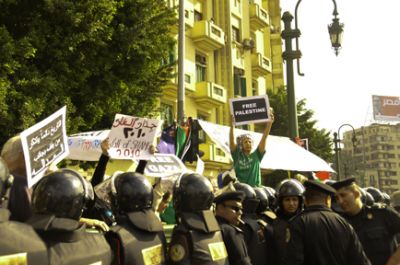 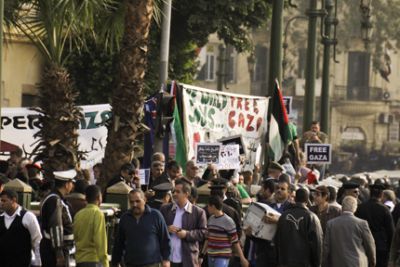 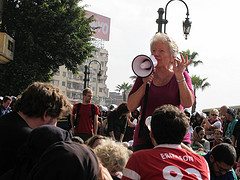