By Ellen Davidson and Judith Mahoney Pasternak CAIRO, December 30–After long meetings into the night and a heated confrontation between protesters at a Cairo bus station, the leadership of the Gaza Freedom March (GFM) here has rescinded its acceptance of an Egyptian government offer to allow 100 of the 1300-strong delegation to cross the border into Gaza. The group gathered in Cairo to travel together to a Dec. 31 march in Gaza against the Israeli blockade of the territory and to commemorate the one-year anniversary of Israel's 22-day bombing and invasion that killed 1,400 and left thousands wounded and more homeless. GFM participants had spent the early part of the evening yesterday at a rally at the Journalists Syndicate building to protest a visit to Cairo by Israeli Prime Minister Benjamin Netanyahu. Local Egyptian groups initiated the action, and invited GFM to join. The steps of the building were crammed with people chanting in English and Arabic and, as usual, the street was lined with two rows of Egyptian riot police. After they left the demonstration, newly energized by the spirit and enthusiasm of the protest. GFM participants learned that Egypt had offered to allow 100 delegates plus a truck of material aid through the Rafah border crossing, and that the GFM leadership had only a few hours to give authorities a list of people to go. Many activists were outraged that the leadership had accepted an offer that would split the group. They felt the GFM was in a strong negotiating position, noting that the government of Hosni Mubarak has been taking a beating in the Arabic-language media for its refusal to let the GFM through. In addition, Egyptian authorities have been criticized for beginning construction on a wall between Egypt and Rafah that would entail a 17-foot underground steel barrier to prevent goods getting in through smuggling tunnels, which is currently how much critical material, including food and medicine, gets in to the people of Gaza. 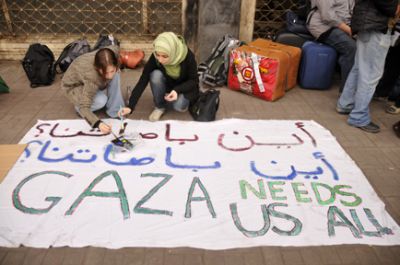 Delegations from countries such as France, Italy, Scotland, and South Africa refused to provide names for the list of 100, saying they were not willing to send anything less than their entire delegation was allowed to go. Some individuals who were selected as part of the 100, including 85-year-old hunger striker Hedy Epstein, declined to go because they disagreed with the decision to accept the limited offer. Meetings and impromptu discussions went late into the night. Although GFM organizers attempted to consult the broader delegation in choosing who would go, the short deadline and logistical difficulties made it impossible to get any meaningful input from much of the group. Through limited discussions with some participants, a list was put together that attempted to represent different constituencies and nationalities. Fuel was added to the controversy when the Egyptian foreign minister, Abu Al-Gheit, held a press conference saying that the 100 being allowed to go to Gaza were from organizations that his government deemed “good and sincere in standing in solidarity with Gaza the same way as we [the regime] do,” while the rest of the GFM participants were “from organizations that are only interested in subversion and acting against Egyptian interests, to sow havoc on the streets of Egypt.” He stated that the Egyptian people knew enough to stay away from these hooligans. This morning at 7 am, two buses were waiting to take activists to Rafah. Feelings ran high among the assembled Gaza freedom marchers who came to see the 100 off. As those chosen to go got on board, other GFM participants made impassioned pleas that the group not allow itself to be split. Many of those preparing to leave were torn between their desire to go to Gaza and their belief that sending a smaller group was not in the spirit of the project, which had been organized as a massive show of opposition to the blockade, not as a humanitarian aid mission or a chance for individuals to travel into Gaza.

Retired U.S. Army Col. Ann Wright, a member of the march steering committee, speaking through a megaphone for the GFM Steering Committee, declared, "It's a wonderful morning [on which] some of us are going to Gaza." Tomorrow, she said, the Gaza Freedom March would be in Gaza, she said, and "you all will be watching in solidarity in Cairo.""We go all or none," responded Catarina of the Italian delegation, which had refused to send a representative on the bus. A journalist, Sulieka Jaouad of Princeton, insisted it was important that conditions in Gaza be documented. "I feel like the march has recreated the conflict," she said, and "part of me feels like I should stay, but journalists can report back." The decision had been contentious even among the GFM leadership.

March media and communications coordinator Max Ajl, a Jewish activist from Brooklyn who had been selected as one of the 100, said, "All we're doing if we go in a group of 100 is collaborating in the collaboration. We're letting them set the terms. This is just a move to divide us." And pointing to the two buses waiting to leave, he added, "These buses shouldn't be going to Gaza until there are 20 more." Echoing his thought, many in the crowd had begun to chant, "Where are the buses? Where are the buses?"

It became clear that the leadership was trying to think through the situation even as the buses stood ready to leave. A few minutes after Ajl's bitter statement, Felice Gelman, one of the coordinators, said, "The Steering Committee decided after lengthy deliberation that accepting the offer was an incorrect decision because of the divisive impact on the march and because of the conditions imposed," which included calling the group a humanitarian aid mission of CodePINK (one of the main groups behind the international delegation), rather than the Gaza Freedom March. Gelman explained that the Egyptian and Israeli governments–and the U.S. government–"do everything they can to prevent civil society from having a voice. Israel would like to say, 'There are a million and a half people in Gaza, and they're all Hamas, so we can starve them and ill them.' But it's not true. There's a million in between, who just want their lives to go on, and [supporting them] what the Gaza Freedom March was for." 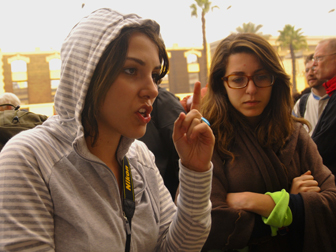 As the morning wore on, the divide between those who supported the decision to send the twobuses and those who thought it should be all or none grew deeper and more bitter. A documentary filmmaker who had been chosen to go but changed his mind just before boarding wept as he explained,"I'm not going to be fuckin' privileged again." Two Palestinian-American sisters from Chicago, Dana and Lara Elbrno, had been chosen to go and refused. Lara said, "We are Gazan, and every cell in my body wants to go. [But] the Gaza Freedom March is not just about giving people a chance to see Gaza. It's a political movement, and to be strong and effective and united, we have to continue to be a political movement." Emily Ibsen of Toronto echoed the thought. Bringing "critical mass [to Gaza] is what it's about," she said. A turning point came when Ziyaad Lunat, the press liaison for GFM, put Omar Barghouti, aleading organizer of the Dec. 31 march inside Gaza, on a speakerphone inside one of the buses. Barghouti told the delegates that it was too divisive for the group of 100 to come through to the march, and it was better for them to stay with the larger GFM delegation.Amid cheers from the activists outside, many of those on the bus got off. Some were clearly still undecided, and one Palestinian woman who remained aboard begged for the caravan to continue so that the material aid could get through. Another woman remaining on the bus called out, "This is divide and conquer! We have medicine on the bus!" 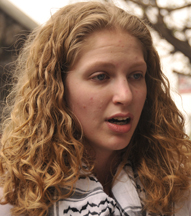 Julia Hurley, who had raised $17,000 in material aid, was distraught at the idea that the buses might not go. She described her first encounter with Palestinian children in a refugee camp in Bethlehem: “I saw them playing in garbage. And it’s not right. They’re not given the opportunity to have the education they deserve because of the blockade, because of the siege, because of the occupation. We need to change that and the only way to change that is to get in there and bring their voices out. So I really feel we need to go, even if it’s just a hundred people.” 'SAD SITUATION' Former Weather Underground leader Bernardine Dohrn was one of those who disembarked, but she was deeply disappointed: “I think it’s a very sad situation that our delegation became divided around this issue. I think it was an issue that could have gone either way. For reasons that I think are fully human and also sectarian and small-minded, a lot of people felt bad about this decision, and of course the Egyptian government totally predictably seized on it for their own despicable aims… . The divisions were very sad to see. I think they ultimately influenced the committee in Gaza to decide it was probably too divisive and we shouldn’t come. And when they spoke to us by speakerphone on the bus, that made many of us decide that we had to get off the bus.” Eventually, the two buses did leave for the Rafah crossing, but they were not full and were no longer considered part of the Gaza Freedom March. The GFM leadership sent out a press release saying it was rejecting the Egyptian offer and activists turned their attention to continuing to press for permission for the entire group to go to Gaza, and to planning an action tomorrow in solidarity with the march in Gaza. 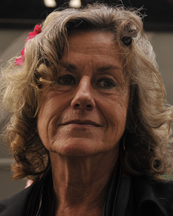 Said Dohrn: “Now I think our job is to heal the wounds very quickly  here and to try to get hundreds of buses and get our asses over to the Rafah crossing.” Rebecca Vaughan assisted in reporting for this piece.