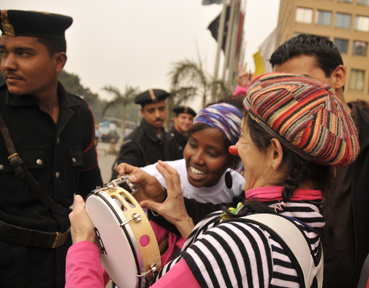 CAIRO–Participants in the historic Gaza Freedom March (GFM) here turned to the United Nations this afternoon for help in getting the 1362-strong delegation through the Rafah border crossing to Gaza. Egyptian authorities have declared the crossing closed for December, stating that tensions are too high and it is unsafe.

The marchers have countered that they are willing to undertake the risk and that the Egyptian government claim that the situation is too dangerous is really a pretext for keeping protesters from joining thousands of Gazans for a massive march against the Israeli blockade of the territory. GFM participants traveled from 42 countries for the action, planned for December 31.

This afternoon, hundreds of march delegates converged on the U.N. Agencies and World Trade Center in Cairo to request that U.N. officials here help in negotiating with the Egyptian government for entry into Gaza. GFM representatives Walden Bello, a member of the Philippine parliament, and Ali Abunimah, author and cofounder of the Electronic Intifada website, asked U.N. representatives here to help the group break the impasse with the Egyptian government by pressing the authorities to allow the entire group entry; short of that, GFM organizers hoped that the United Nations would either make arrangements for the aid to be brought in through U.N. channels or pressure the Egyptians to allow a smaller group of two busloads of delegates and one busload of material aid into Gaza. The U.N. representative agreed to bring the group’s requests to the Egyptian government. 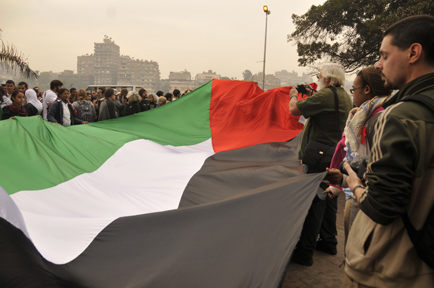 On a large sunny plaza in front of the U.N. Agencies and World Trade Center building, the GFM participants drummed, sang, chanted, and billowed a gigantic flag. The atmosphere was festive, especially compared to the somber mood of yesterday’s commemoration of the 1,400 Palestinians killed in the monthlong Israeli assault on Gaza that began a year ago. Some activists met in smaller groups to discuss strategies for the rest of the week, which increasingly appears as if it will be spent in Cairo, as the Egyptian authorities are not even allowing marchers to travel to Al-Arish, which is near the Rafah border crossing (see “Egyptian Authorities Harass Palestinian Solidarity Activists“). The protesters who held banners at the edge of the gathering engaged in friendly discussions with the policemen who faced them in a line surrounding the plaza. 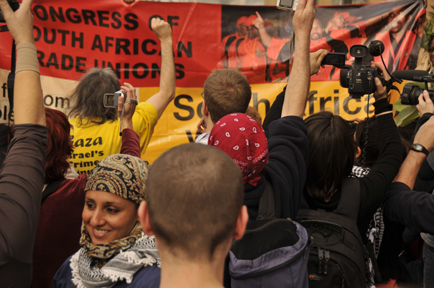 The group was diverse, comprising Palestinians,  Arabs from other countries, Palestinian-Americans, Filipinos, representatives from many European countries and the United States, African-Americans, Puerto Ricans, and Japanese, among others. The delegates from the Coalition of South African Trade Unions received a particularly warm welcome as they unfurled their banner.

As the afternoon wore on, some of the police arrived with batons at the ready, and a second row was added to the first line of police, making participants uneasy that the heretofore peaceful actions would be marred by police violence or arrests. Some of the activists chose to stay in the plaza until a response was given by the Egyptian government to the group’s requests. At 4 pm, there were still more than 100 protesters at the site, and some had vowed to sleep there if necessary.