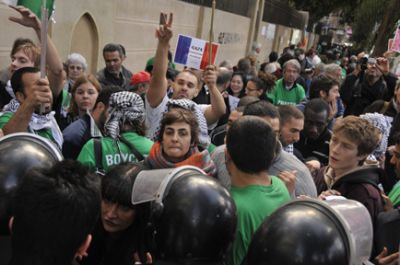 CAIRO, December 29–Some 200 French delegates to the Gaza Freedom March (GFM) remain camped outside their own embassy here, surrounded by two lines of Egyptian police. They are attempting to get help from their government in their efforts to go to Gaza as part of a delegation of 1,362 international activists who came to join Gazans for a Dec. 31 march against the Israeli blockade of the territory. [The Egyptian government said this afternoon it would allow a smaller group to enter Gaza; see Egyptian Government Allows 100 to Go to Gaza].

The Egyptian government has been refusing to allow anyone across the border., and GFM delegates have been trying various tactics to get the authorities to change their mind, including seeking help from their own embassies and from U.N. representatives here. Some activists have attempted to set out in smaller groups for the Egyptian-controlled Rafah border crossing, but were stopped at various points. Thirty-eight internationals made it as far as Al-Arish, near Rafah, but were stopped and confined to their hotel. Others were stopped at the Cairo bus station or in cabs as they attempted to head toward Al-Arish.

A caravan of material aid organized by Viva Palestina, meanwhile, has been given permission to go through the crossing after long negotiations about their route. They are expected to go through tomorrow.

Spirits were high at the French Embassy on Giza Street this morning. Some 25 GFM delegates from other countries came to the site to offer support and were told by the police they could not go behind the police line unless they had French passports. They gathered at one end of the block, which has been dubbed “Giza Strip,” and the French activists converged on the other side of the police line. Those inside asked what countries were represented outside, and, in a rather surreal moment for the U.S. activists, set up a chant of “USA! USA!” upon hearing that some were from the United States. There were also GFM delegates from Germany, Scotland, and Jordan among other places.Eventually, those outside were allowed to enter behind the police lines, where they were welcomed warmly. 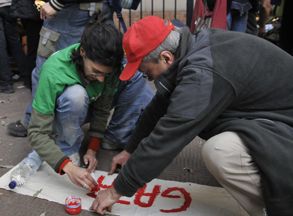 The French activists have been sleeping in rows along the sidewalk. While food and drink are being brought in from the outside, they are dependent on the embassy for toilets. Protesters have to wait as long as two hours to use the single toilet being made available for 200 people, and then they must show a French passport to get access, creating even more hardship for those inside who are from other countries.

At one point, some embassy staff came to the doorway, and the protesters began chanting “Les toilettes pour tous!” (toilets for all) and “Pissotieres sans frontieres!” (urinals without borders).