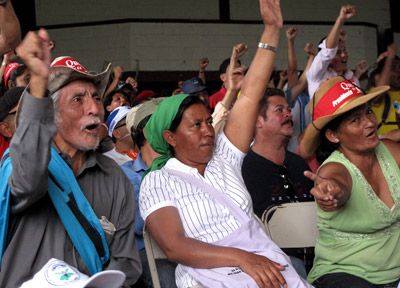 Adapted from reports by Belén Fernández. Photos by Tim Russo.

Tegucigalpa, Honduras—A few days prior to the Nov. 29 elections in Honduras, Francisco Varela, a homeless man who is a fixture outside one of the ubiquitous Espresso Americano establishments in the Honduran capital, was sporting a T-shirt for National Party presidential candidate and soon-to-be victor Porfirio (Pepe) Lobo. The shirt bore a slogan championing Lobo as an agent for change.

When asked what change he would bring, Varela insisted Lobo would eliminate gang culture in Honduras either by imposing the death penalty or by imprisoning gang members for so long that they couldn’t reproduce. No doubt, violence related to drug trafficking bedevils Honduras, but the barefoot Varela did not explain how such an agenda was more beneficial to him than getting access to housing, shoes or food.

That the homeless Varela was backing draconian solutions usually espoused by the well-todo and the corporate media is telling. The current regime, which came to power after staging a coup against President Manuel Zelaya June 28, has been shunned by most countries, except most notably the Obama administration, and has ruled largely through violence and intimidation. By controlling the media, through tactics like repeated shutdowns and sabotage (including pouring acid on the transmitters of anti-coup Radio Globo and Channel 36), the coup-makers have managed to convince some of the poor that their interests are being served. 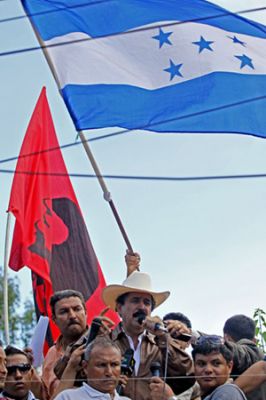 The coup-makers’ concern for the Honduran people, who subsist on an average of $154 a month, was on full display during the Dec. 2 session of the National Congress. It had convened to consider whether to restore Zelaya to office for the remainder of his term, which lasts until Jan. 27, 2010. During the nine-hour session, congress members, who rejected Zelaya’s restitution by a vote of 111 to 14, invoked “the Honduran people,” “the poor,” “democracy,” “god,” and Venezuelan President “Hugo Chávez” so frequently that banning these terms would have made the debate last about as long as a coffee break.

Congress members also professed their desire for a “reconciliation of the Honduran family,” but they did not appear to consider that 50 to 70 percent of the family abstained from voting in the Nov. 29 election, according to independent observers.

On election night, the Honduran Supreme Electoral Tribunal reported a turnout of more than 61 percent, despite announcing that its vote-counting system had failed. Prior to the election, it had spent half-a-million dollars to purchase 20,000 cell phones for use by officials at polling places across the country to orally report results to the Tribunal’s main computing center. How this was supposed to work in a country where “cell phone reception” is largely nonexistent or how the participation rate was calculated so rapidly, despite the technical breakdown, remains a mystery.

I visited several polling sites around Tegucigalpa on election day, and in none did I find the turnout the coup-makers (or “golpistas,” as they are known) were claiming. In fact, voting was extended by an hour, not because there was a rush at the polls, as the golpistas said, but because they apparently hoped more people would trickle in.

If there is a specter haunting the coup regime, it is not Zelaya, who, since his return in September, has been holed up in the Brazilian Embassy under siege by the Honduran police and military. (As The Indypendent goes to press, Zelaya is attempting to negotiate a departure from the country.) 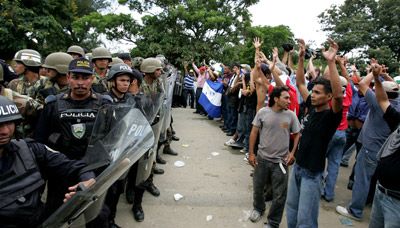 Similarly, the top concern for the broad-based resistance is not Zelaya, but the “Constituyente,” or a National Constituent Assembly to rewrite the constitution, which is skewed toward the Honduran elite. It was, of course, after Zelaya pushed for a nonbinding referendum in order to gauge support for such an assembly that the business class and military launched their coup.

Presumably in order to avoid discussing why a nonbinding referendum was such a danger, the golpistas recast the proposed ballot into a bid by Zelaya to install himself as eternal president of Honduras in violation of constitutional articles prohibiting leaders from serving more than one four-year term.

The concern for the constitution, however, did not extend to the coup itself, the exile of Zelaya or installation of Roberto Micheletti as the new president, all illegal acts under the constitution. And after two days in power, Micheletti signed a decree suspending constitutional rights such as personal liberty, freedom of association and assembly and the right to leave, enter and stay within the national territory.

It is Chávez who haunts Honduras, or at least the rich. Pro-coup congress members are fond of proclaiming, “This country does not belong to Chávez.” Anti-coup Congressman César Ham agreed, wagering that it is the 10 percent of the Honduran population who possess 90 percent of the wealth that really own Honduras.

One pro-resistance acquaintance who works at a golpista newspaper said that the wealthy fear Honduras will be transformed into the next Venezuela, and for those who have two houses, an allegedly socialist government, “will take away one of them.” 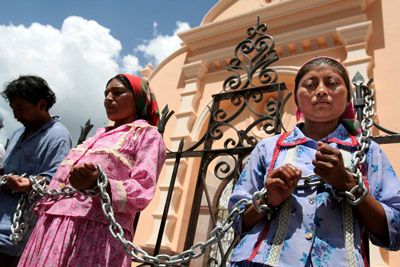 In August, Honduran Army Commander Miguel Angel García indirectly invoked Chávez when he announced that the armed forces had prevented the arrival of socialism to “the heart of the United States.”

What the Honduran elite really feared was Zelaya’s decision to bring Honduras into the Bolivarian Alternative for Latin America, a Venezuelan initiative guaranteeing more affordable fuel and medicines, among other items, for participating countries. Or Zelaya’s move to increase the urban minimum wage by 60 percent, to $290 a month. Or his veto of a congressional bill that would have banned the sale of the morning-after pill. (This measure reportedly infuriated Opus Dei, the fascistic Roman Catholic organization, which is believed to count prominent golpistas among its adherents.)

On the morning of the election, I visited Colonia Estados Unidos, a district by the name of The United States on the outskirts of Tegucigalpa marked by mangled dirt roads and limited infrastructure. At the voting center I encountered Lobo supporter Oscar Izaguirre, who identified himself as a member of the National Party and president of the center. He quickly invoked the alleged expansion of Venezuelan socialism and went beyond typical golpista warnings about Chávez, reminding me of the necessity of intervention in Vietnam by his district’s namesake.

Izaguirre said he wished to rename his district as punishment for the current “U.S. intervention in Honduran affairs,” golpista code for the U.S. policy of nominally admonishing the coup regime while permitting its consolidation of power. He didn’t say if he considered the U.S. use of Honduras as launching pad for the contra war against Nicaragua in the 1980s to be a case of “intervention.”

Most international election observers, such as the United Nations, Carter Center and Organization of American States, refused to monitor the election given the repressive atmosphere. Human rights groups have documented a long list of “grave violations” by security forces: murders, disappearances, torture, attacks on journalists, widespread detentions and assaults on nonviolent protests, including one on a resistance march on election day in the northern city of San Pedro Sula.

It took the U.S. Department of State only hours to claim the vote met “international standards for fairness and transparency.” Perhaps even more telling, U.S. Ambassador to Honduras Hugo Llorens was applauded at a Tegucigalpa voting center where he had accompanied a member of his security team to vote.

Outside another voting center, Colonia Kennedy, a district in Tegucigalpa, was a small group of middle-aged resistance members. After telling a Univisión television crew that they did not consider the elections legitimate, they were lambasted by onlookers, to which they replied with chants of “Dignity! Dignity!” The exchange resulted in two pickup trucks full of police being called in to monitor the resistance members. 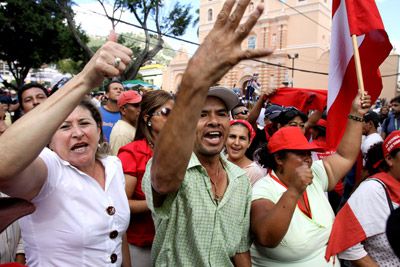 That the resistance continues is remarkable. In the weeks following Zelaya’s ouster, large anti-coup marches, some reportedly numbering more than 150,000 Hondurans, filled the streets. The coup inadvertently united isolated sectors from lawyers and artists to farmers and feminists. Teachers have played a central role and canceled Thursday and Friday classes for weeks so they could participate in resistance activities.

Resistance member Jeremías López, a primary school teacher in the Honduran department of Olancho, credits the coup with having provided the impetus for an unprecedented level of spontaneous and large-scale social organization in Honduras.

The strategy of the leading resistance group, the National Front of Popular Resistance Against the Coup d’Etat, has centered on mass mobilizations and even included cross-country marches. Many were critical of Zelaya, but nearly all supported the National Constituent Assembly. The marches diminished over time, however, as the golpistas stoked a climate of intimidation and terror.

Now that they have the Obama administration’s blessings, the golpistas seem to hope that Honduras will be able to proceed with business as usual. But for the resistance the elections constitute a closure to the first phase of the struggle; it is now regrouping and restructuring its strategy.

The fact that slogans like “No to elections” abounded on the façades of voting centers on election day suggests that a regime that is incapable of erasing graffiti will be even less adept at erasing a collective experience of resistance.

PHOTOS:
1 People gather at a weekly Popular Assembly meeting July 19 at the Workers of Beverage and Similar Union headquarters to vote to maintain the resistance and daily marches, despite repression.

2 At a police barricade, demonstrators raise their hands to show they are unarmed July 24. Thousands of protesters defied as many as 20 police and military roadblocks near the Nicaragua border to greet ousted President Manuel Zelaya, when he made his second attempt to return to Honduras.

3 Indigenous Lenca women chain themselves to the gates of the cathedral in Tegucigalpa, invoking a desire to break free from the chains of colonialism, and calling for an end to the military coup and the establishment of a National Assembly to rewrite the constitution. The women reached the capitol after a five day walk from their communities in western Honduras.

4 Thousands of Zelaya supporters and members of the Honduran resistance movement rally around police barriers outside the National Congress during its vote 111 to 14 against reinstating Zelaya Dec. 12.

5 Standing under the Honduran flag, Zelaya addresses his supporters on Sept. 21 outside the Brazilian Embassy in Tegucigalpa, which is surrounded by a five-block military perimeter.